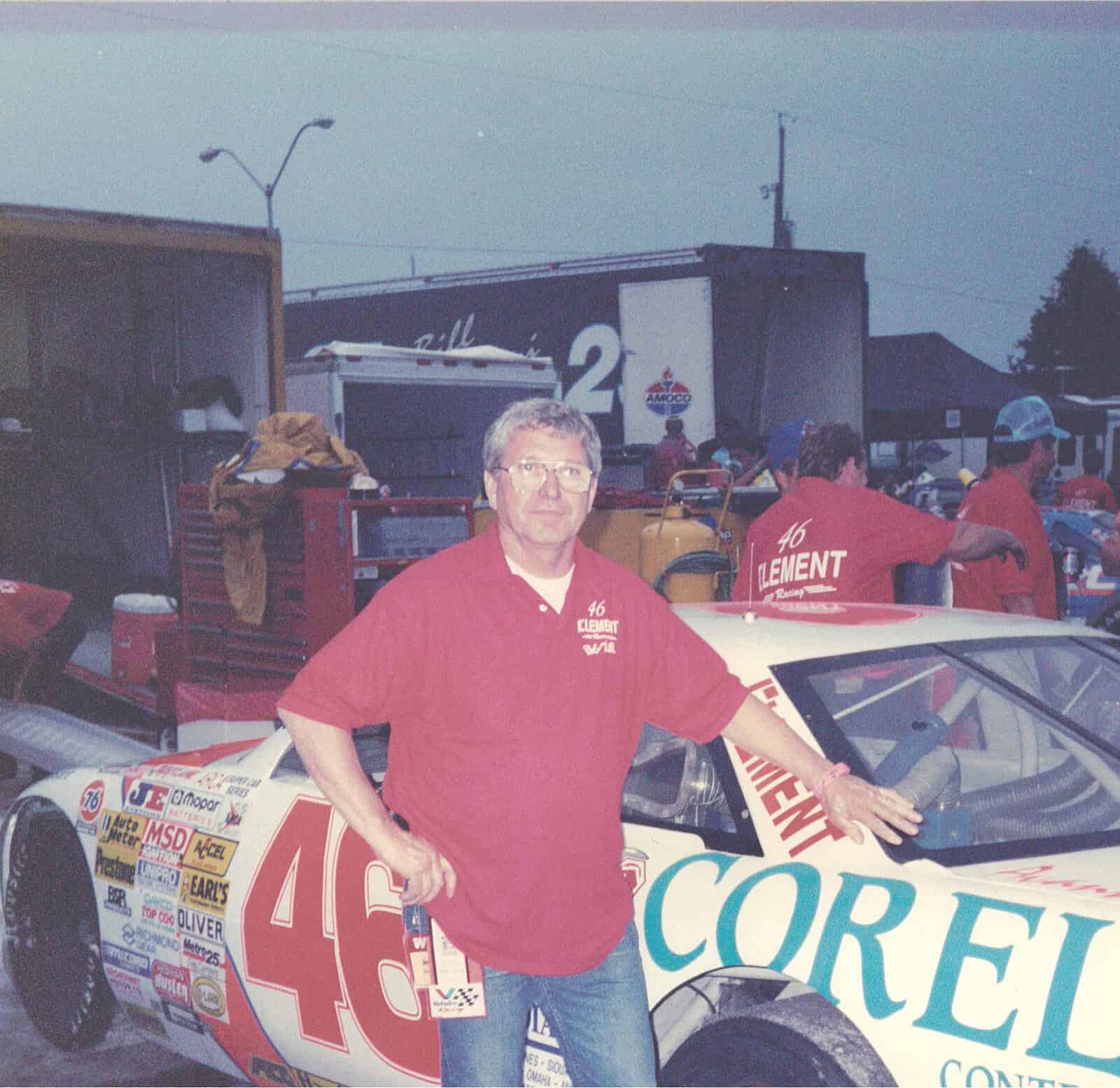 One of the most accomplished drivers in the ARCA Menards Series of the past 20 years is Frank Kimmel. During his run in ARCA, Kimmel won nine ARCA championships in a 10-year span from 1998 to 2007; all with team owner Larry Clement.

Clement owned an ARCA car from the mid ’90s all the way up to 2009 when Matt Carter ran two races for Clement’s team. Clement scored 75 wins in 340 starts in the ARCA Menards Series as an owner and finished in the top 10 in over 70% of his starts.

In part one of this interview, Clement recants his beginnings in auto racing and the flip that secured sponsorship from Advance Auto Parts.

Part two of this interview is scheduled to be released tomorrow.

Jared Haas, Frontstretch: You had quite a few drivers, especially early in your career that were in the Midwest. How did you know, meet and recruit those drivers to drive for you?

Larry Clement: Well, actually, I did a deal with Howard Mellinger when I was in Fort Dodge. Howard Mellinger owned a company called Jim Dandy Printing. He had a racecar that he owned that they wanted me to sponsor that Bob Hill drove, a late model, top-of-the-line model. I said I got two questions. “Is it fast?” and, “Will we win?” And he said, “Yeah, we won races. We finished second in the championship last year in Hamilton County.” And I said, “Well, then let’s do it. I’ll sponsor you and I expect to move up one notch.”

We won the track championship there five years in a row and a championship at Mason City [Motor Speedway]. We took the program out a little bit from there and ran in that world of NASCAR [which] had a touring series called the Busch All-Star Series. We won that championship in ’93. Bob was an absolutely great driver. [On] how we got into ARCA racing, I took the team down [to] the spring NASCAR race at Talladega [Superspeedway]. The day before we were sitting on the pit wall after the ARCA race. We’re watching cars go around about 200 miles an hour [in] ARCA cars.

After the ARCA race, Mark Ludwig, a longtime crew chief, and Bob Hill were sitting on the pit wall when I walked down and told them, “You better get ready. I’m gonna get one of these. I think we can do this.” I don’t know if they thought I was crazy. There we are running half-mile dirt tracks although Bob [Hill] won a race at Indianapolis on a mile track in a dirt late model and ran good everywhere we went. That’s how we decided to get into ARCA racing.

Haas: How long did you own your dealership?

Clement: I started that [in] November of 1971, 50 years ago last December, and then I sold that in 2000. I’ve done a partnership in three Mack truck and construction equipment dealerships in Sioux Falls, Rapids City and Aberdeen (South Dakota) since 1987. That’s what I do now. I’ve got partners, but I’m the general manager and run three big dealerships. We had the Mack truck dealership in Fort Dodge. One year, we were fifth in the nation in the mid ’90s and one year sixth in the nation in number of new Mack trucks sold out of one dealership. That’s pretty good for a farm boy in a cornfield.

Haas: Did you run your shop the entire time out of Iowa or did you eventually move to Charlotte? Where did you have your shops?

Clement: When Bob [Hill] was driving, we have the shop in his place down there by Stanhope [Iowa]. When Frank [Kimmel] started driving, we had our race shop moved down to [where] he was from [in] New Albany, Ind. right across the river from Louisville, Ky.

Haas: One of the most memorable races for you was the 1996 ARCA season opener at Daytona. Where did you get the car that flipped over seven times?

Clement: Believe it or not, that car was the car that Derrike Cope won the [1990] Daytona 500 in the year [that] Dale Earnhardt cut a tire on the last lap. That very car still exists as Marty Pringles [has] that car [in a] de facto kind of a museum (Iowa Hall Of Fame & Racing Museum) [in] a collection of cars. It was a Lumina, and we put a Monte Carlo body [on it]. It went end over end on the last lap six times. It wasn’t Bob’s fault. [Andy Thurman] got loose and come down and hit him in the right rear and went down off the track. When they hit the apron, the left tire caught and started flipping the car end over end.

Haas: I was just watching that replay of that wreck. I always thought that’s not Hill’s fault. He just got into somebody else’s mess when somebody got in the back of Harris DeVane.

Clement: We had a really good car. At that very race, I had been talking to Advance Auto Parts about sponsoring the car and they didn’t have the time to meet with me. Two days before the race I called their VP in marketing Chad Tilly. I said, “Chad, tell you what, we got a really good racecar. We got in-car cameras, three cameras. We’re gonna get a lot of exposure on this car, a lot of airtime,” and I said, “You want to pay for the decals. [They] cost $300. I’ll put you on the car for the race just to prove to you what we can do for you. I know everybody [has] somebody [they] got to answer to.”

He [Tilly] said, “Well, you’re wrong about that. I don’t have to answer them, buddy. Let’s do it.” I had his card with their logo, and I said that was the logo you want on the hood, right? [Kelly said] yeah. It made us famous. There was about 25-30 pictures that a photographer had taken that was right there where the wreck happened just fractions of a second apart. I think it was on every front page [in] every newspaper in America [was] a picture of our car airborne over the top of Bob Schacht’s car with two more [cars] going by in the smoke.

You can read Advance Auto Parts just plain as could be on the hood. We had a pretty good race going on until late in the race with something broke inside the shock absorber. That’s why we weren’t up front. We were running fifth or sixth or something.

Haas: Is that how you got Advanced Auto Parts to stick with you for quite a while was because of that wreck?

Clement: [Chad Tilly] had told me that I’m not gonna go watch the race. [I said] you have to make sure all your store managers and executives know that you got a car in a race. I call him Monday and I said “Chad, did you see the pictures? Well, believe it or not. When I told you we were gonna get a lot of airtime, I hadn’t planned on that much hang time.” They must rerun that [race] eight or 10 times. I taped a video while I was home.

Kyle Petty was a commentator and he said, “Oh, this is gonna hurt me,” [because] it sheared the roof camera off, and all you had [was] the sound. When the car came to rest, it ruined what was left of it, but it was on its wheels. They [the broadcast] turned the in-car camera on and there right in front of the cameras [was] Advance Auto Parts. Later, there’s a company called the Sponsors Report that analyzes the telecasts and assigns an advertising value that the sponsors get. We were the number one sponsored car in race on the Sponsors Report. [The reason] was because of the replay of the wreck.