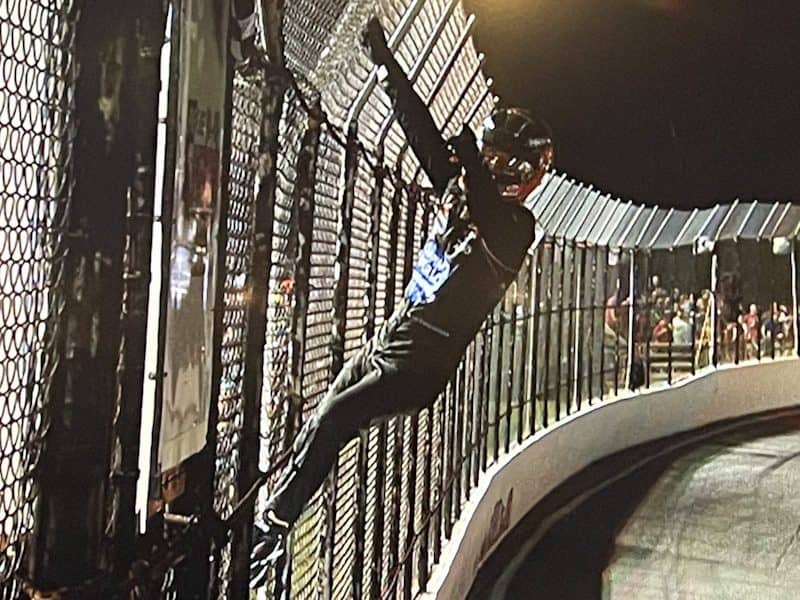 Probably the most shocking factor in the first SRX evening of the 2022 season is just how competitive the drivers with almost exclusively IndyCar backgrounds were.

Last season, just six heats or feature races were won by IndyCar drivers, with Marco Andretti taking half of the wins by sweeping all three races at Slinger Speedway. Paul Tracy, who only had two top-five feature finishes last year still finished 11th on the night, but he did look very good in the first heat battling with Bubba Pollard and Tony Kanaan.

Kanaan also looked particularly strong, being the odd man out in a three-way battle between himself, Ryan Newman and Pollard for second in the closing laps of the feature race. Kanaan never finished above seventh in an SRX feature race prior to Saturday night, so a fourth had to be a big deal for the former Indianapolis 500 winner.

But the star of the evening, of course, had to be Helio Castroneves. The four-time Indianapolis 500 winner revealed after his big win that he and SRX CEO Don Hawk had an agreement that Hawk would try and land the 46-year-old Brazilian a ride in the Daytona 500 if he won an SRX race this year. The reality is that a team would be foolish not to consider Castroneves for a seat in the Great American Race, as his participation would be a huge get for NASCAR if marketed correctly.

Helio Castroneves wasn't even scheduled to race tonight. He literally got on a plane without getting the confirmation that he'd have a car. He just hoped.

Yeah, if he won a SRX race this year, CEO Don Hawk promised him a NASCAR ride.

It’ll be really interesting to see if this IndyCar run of dominance continues throughout this season or if it turns out to be more of a flash in the pan like Andretti’s Slinger dominance. Newcomer Ryan Hunter-Reay had a quiet night and finished eighth in his first major stock car race while Andretti finished just in front of him in seventh.

One driver who really seemed to struggle for much of the night, in contrast, was Tony Stewart. The defending series champion finished a solid third in heat one, but then just couldn’t come marching back at all in the second heat or the feature, finishing eighth and 10th respectively.

It’s crazy just how hot and humid the conditions were at Five Flags, with it feeling like 100 degrees Fahrenheit for most of the day due to humidity. The scene after the second heat with most drivers doubled over in pain was not because these were old men trying to race, even though it may have looked the part. Next year, I don’t think a Florida race would be a great idea if SRX stays in the summertime, just because a lot of the drivers are fairly old and that is a fairly major health risk to be racing in those temperatures.

It’s fine to be a fun series with a few bonafide legends of American motorsport, but you don’t want to be like that Bristol Legends race from a decade ago where Charlie Glotzbach t-boned Larry Pearson in a horrific crash that led to a lot of questions as to if it was ethical to have old-timer races like this.

The best racing of the night had to be whenever Newman and Pollard raced against each other directly. These two drivers were made for each other, the stocky big-name Newman going up against the feisty and loud Georgia construction worker. I really hope this is not the final time these two go after each other on a racetrack, and if there is a season three of SRX, there really does need to be a consideration for Pollard to be a regular in this series because he was absolutely made for it.

We didn’t even get to see him rub fenders with Stewart that much, and obviously another Bobby Santos III appearance next year as a local ringer would make for an incredible atmosphere between the two long-time rivals.

The big arc this season in SRX is probably going to be Newman trying to prove to the racing world that he is not ready to retire to a life of sipping lemonade on his rocking chair. The 44-year-old hasn’t really shown a lot in recent years on the NASCAR circuit outside of developing a reputation of being very tough to pass. Newman should prove a challenge to any driver trying to win in SRX this season, and thanks to his resume, he should be competitive at just about every racetrack.

Next weekend is the first race at SRX in the Virginia-North Carolina mid-Atlantic racing scene, a showdown at South Boston Speedway. Castroneves won at Five Flags after being added to the show that morning, and only local ringer Peyton Sellers has any real history racing at South Boston among drivers in this field, so it’s literally anybody’s ballgame next week in the bologna burger capital of the world.