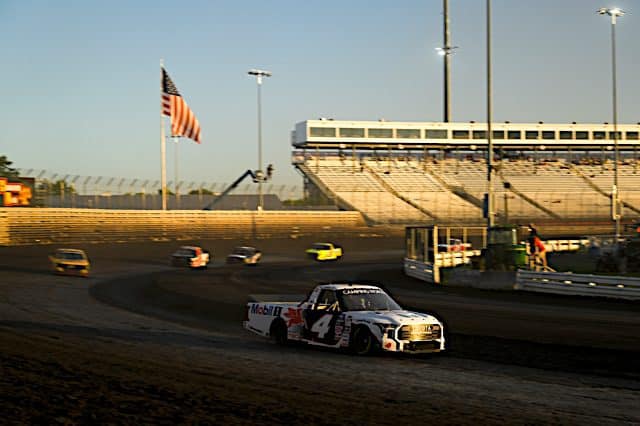 Last week, the first salvo in what could be a long, drawn-out battle between the new Saudi Arabian-funded LIV Golf organization and the venerable PGA Tour was launched.

LIV Golf’s first event did not have big viewership numbers. But that’s not the point of the series – that’s to pay golfers a lot of money to make headlines and turn eyes away from the Saudi government’s human rights violations. It’s the same reason Formula 1 didn’t leave like any reasonable organization would do if a missile strike were to occur within 10 miles of an active practice session a few months ago.

The PGA decided to take action by banning a number of golfers who had agreed to take the money and play for LIV. Phil Mickelson, who to be clear, knows the game being played and is a very willing participant of it, has been barred from competing for the PGA outside of certain majors that he is given automatic access to due to his accomplishments. In racing terms, this is essentially Kevin Harvick being barred from competing in NASCAR.

It’s important for major series race fans to take notice of what exactly is going on here with these two golf tours, because there are three very distinct ways that motorsport could change as a direct result of what happens here:

Probably the most obvious way, this battle is going to provide a view into what an actual modern-day sports war looks like. The reality is racing has only had this during the extremely bitter and divisive open-wheel split, a war that led to NASCAR solidifying itself as the undisputed king of American racing for decades afterward. It’s a battle that IndyCar, 15 years after the merger, is only just now starting to recover from.

Sports wars in history are usually brief affairs, with the new side maybe not even seeing the playing field at times. Obviously the most successful one was the NFL vs. AFL, in which after nine years, the AFL champion was actually able to beat the NFL champion in a football game. Business-wise, player salaries, especially among college athletes turning pro, boomed for both the NFL and AFL and when the first USFL came into existence.

However, most battles end with the new league folding due to hemorrhaging money – see the AAFC in the late 1940s and everything with spring football the last several years. The Federal League made it to the Supreme Court, in which SCOTUS actually ruled that Major League Baseball was a legal monopoly. That’s what makes the LIV deal unique – the invitational is losing a crazy amount of money by design and it would be extremely farfetched to imagine them ever making a profit with how huge some of the dollar amounts being paid out to players are.

Let’s say, hypothetically, somebody rich decided to start an actual counter stock car series to compete against NASCAR. Rich enough to where they approach the series like Vince McMahon initially did with the second iteration of the XFL, in which he had earmarked up to $375 million in losses before cashing in with a new media rights agreement. As the battle goes on, are we going to see more and more teams and drivers choose a side? There are still golfers deciding to make a jump over to LIV. If Hendrick Motorsports, as an example, decided to field a team in this hypothetical series, would NASCAR decide to threaten them with a ban?

It sounds insane, but this has happened plenty of times before, albeit in the early days of NASCAR. “Big” Bill France would routinely strip all championship points from any driver who dared to race for a rival stock car series, which infamously led to Bill Rexford being declared the 1950 Grand National Series champion over Lee Petty, who was stripped at two separate points in the season.

Last year, Chase Elliott mentioned off-hand that he had been given permission to make a one-race cameo in SRX by NASCAR President Steve Phelps. It’s unclear if this is NASCAR policy or if Elliott was just trying to be nice; it should be mentioned that Kyle Busch also stated last year he was going to compete in SRX before he was “shut out of that one”, but it’s also unclear if that was by NASCAR (unlikely) or by Toyota/JGR (more likely).

PGA golfers are independent contractors, and the PGA shutting these golfers out because they signed with somebody they didn’t like is almost certain to lead to a legal battle of some kind. If the results of that battle go one way or the other, there could be major consequences on one end of the garage.

The general consensus I’ve gotten is that drivers are considered independent contractors generally, and that they are generally responsible for their own health insurance and retirement. There are almost certainly exceptions to the rule the higher up the ladder you climb, but at the end of the day it really doesn’t matter at the Cup level.

The reality is, if they need to, big Cup teams would have the funds to pay if there is a somewhat unlikely government crackdown on employees being classified as independent contractors. And there is an argument on both sides of the coin when it comes to NASCAR drivers, in that drivers already agreed to these contracts and that with 38 weekends a year booked up, there’s not much outside work a driver could take on that doesn’t come into conflict with their work for their given team.

The concern may lay more in smaller teams in the NASCAR Xfinity and NASCAR Camping World Truck series, along with IndyCar teams. But the reality there is that those drivers are much more apt to being true independent contractors who don’t need approval to blow their nose like a lot of Cup drivers do – see when Ben Rhodes, a Toyota driver, filled in for Chevrolet driver AJ Allmendinger a few weeks ago.

The Washington Post put out a very interesting article last week that detailed what the major golf broadcasters – chiefly NBC and CBS – could do under the scenario where LIV steals so much talent from the PGA that the Tour’s major events both begin to lack big names and fall below competitive standards.

It’s estimated that the PGA tour rights fees are valued at roughly $700 million per year, between NBC, CBS and ESPN. Theoretically, if the PGA Tour continues to lose value and the networks can get out of those contracts, suddenly that would free up a chunk of change and airtime if any of them decide to pursue NASCAR.

John Ourland, a media reporter for Sports Business Journal, predicted last year that FOX would renew their NASCAR contract while ESPN would take over the NBC portion of the season. This may still happen regardless of what happens during the “Golf Wars” just because Disney is a huge company making enough money to bid on anything.

But suddenly, if the PGA Tour is out at the end of this year in an admittedly unlikely scenario, securing NASCAR might be more of a priority for NBC. Putting these races on the USA Network is going to be very interesting if they end up losing out to ESPN at the bargaining table, because if those go away, USA has almost no viewers on the weekends after two years of being in the top five every Sunday in the summer and fall.

CBS is in such a weird situation, and the reality is that nobody will know their opinion on motorsports until Saturday night’s SRX rating from Pensacola comes in Tuesday morning and that series progresses over the next month. But there’s always been the hypothetical situation where SRX ends up shutting down due to lack of funding, but CBS likes the ratings enough to where they get a summer cut of the NASCAR schedule a la TNT to essentially replace SRX.

There’s way, way too many questions there with this, and the reality is that any decision as far as cutting PGA out is probably going to come after the NASCAR media deals are announced, which is expected to be about this time next year.

This is a unique situation in that never before have we seen a major sports institution in America come up against a new rival that legitimately is not afraid to throw away billions of dollars, never turning a profit in the process. The most important thing when following these type of stories, even when it’s a subject that has no value to you, is to watch and learn from it. I hope quite a few of the big players in the racing industry keep an eye on how this saga unfolds in the coming months.

Some interesting points there Michael. A lot of ways this could go, and you covered quite a few. Thanks.

If Big Bill was in charge and ANYONE ran a different series it would an automatic “Don’t come back!” But today, if Mr. H or Reverend Joe did it, there would be “special” rules coming into effect.