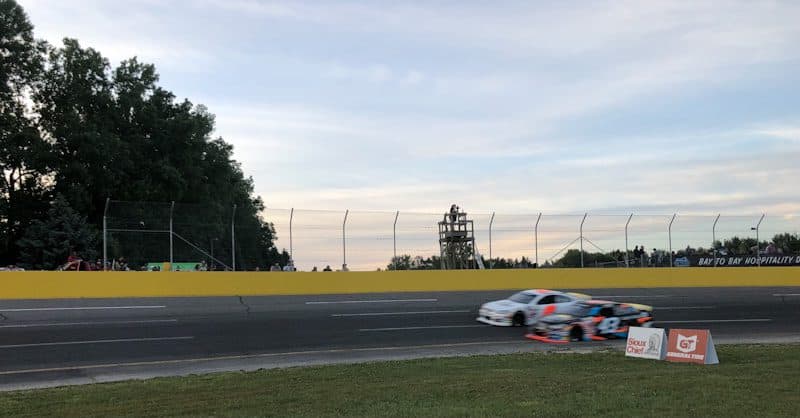 Beginning with the 2022 ARCA Menards Series season, Frontstretch ARCA editor Mark Kristl tweeted his ARCA top five power rankings. These rankings will now be posted on Frontstretch for all our tremendous readers.

Shockingly, in the closing laps of the Zinsser SmartCoat 200 on Saturday (June 18), Daniel Dye experienced a mechanical gremlin in his No. 43 Chevrolet. As a result, Sammy Smith scored his first ARCA Menards Series victory at Berlin Raceway.

Smith is riding back-to-back stout performances since he fully took over the No. 18 Kyle Busch Motorsports Toyota in the main ARCA competition.

In the championship standings though, Rajah Caruth leads his Rev Racing teammate, Nick Sanchez, by one point and Dye by 11 points.

After practice, Sanchez told his team that his No. 2 Chevrolet needed to be faster. In that practice session, Sanchez was the sixth-quickest. He then qualified sixth for the race.

Caruth told Frontstretch that Berlin reminds him of Florence Motor Speedway, a track where Caruth has ample experience. In his first ARCA race at Berlin, Caruth started seventh. As Dye set a blistering pace during the race, Caruth fell one lap down. He received the lucky dog via a lap 66 caution, and Caruth stayed on the lead lap for the rest of the race. When the checkered flag flew, Caruth finished fifth, the highest of the full-time competitors.

Caruth did not have race-winning speed. But he also did not make any mistakes, and these performances will aid Caruth in his quest for the ARCA championship.

It was a heartbreaking night for Dye. Dye undoubtedly had the fastest car all night and appeared to become the sixth ARCA repeat winner at Berlin. Instead, on lap 195, a mechanical gremlin snatched Dye’s win away. Dye’s GMS Racing team has been snake-bitten by mechanical failures in back-to-back races, costing him two potential wins, as well as perhaps the points lead.

Instead, Dye is still in third place, though his championship hopes are still intact. In fact, thanks to winning the pole, leading the most laps and still finishing seventh, Dye earned 40 points at Berlin. It tied for fourth-most, and more importantly, was the most points of all full-time drivers.

“We had such a great GMS Racing Chevy tonight, and I can’t believe how bad our luck has been so far this year,” Dye said in a post-race team release. “The GMS guys did great in preparation and getting the Race to Stop Suicide car dialed in and making it possible to get the pole. We’ll keep just putting our best effort in, and one of these days, hopefully, it will pay off. Thanks to all the fans that came out and showed their support all day.”

Even after terrible heartbreak, @danieldye43 visiting with fans and signing autographs here at @BerlinRaceway. pic.twitter.com/Yv6L8tPio3

Greg Van Alst told Frontstretch he wanted a top-five finish. Instead, Van Alst soldiered on to an eighth-place finish, three laps down.

Already 57 points behind leader Caruth, Van Alst knows winning the championship will be a Herculean task. Van Alst is only eight points behind fourth-place Toni Breidinger though. Ten ARCA races will take place during June 1-September 1. That’s half of the season. Team owner Bill Venturini Sr. remarked that the championship contenders step up their game during the summer. Van Alst might not win the title, but he can still rack up good finishes to climb to fourth in the points.

With his first main ARCA victory, Smith now has one win, five top fives, and five top 10s in six career main starts. His lone finish outside the top 10 was his series debut. In addition, despite not competing in four of the seven races thus far due to being underage, Smith already has led the third-most laps!

Last year, Ty Gibbs piloted the No. 18 to 10 wins en route to winning the ARCA championship. Smith cannot win the championship, but he certainly can win races. I have a feeling his win at Berlin is the first of several to come.

We finally got ourselves an @ARCA_Racing win! So proud of my @TMCTRANS @KBMteam 18 group for working hard all race to have us in position to win.

ARCA heads to Minnesota for its next race. The Menards 250 at Elko Speedway will take place on Saturday, June 25 at 9:30 p.m. ET with TV coverage provided by MAVTV Motorsports Network and available on FloRacing.