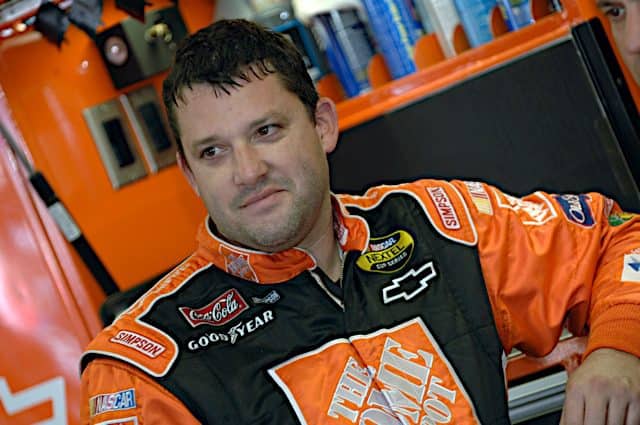 One of the most accomplished drivers in the ARCA Menards Series of the past 20 years is Frank Kimmel. During his run in ARCA, Kimmel won nine ARCA championships in a 10-year span from 1998 to 2007; all with team owner Larry Clement.

Clement owned an ARCA car from the mid ’90s all the way up to 2009 when Matt Carter ran two races for Clement’s team. Clement scored 75 wins in 340 starts in the ARCA Menards Series as an owner and finished in the top 10 in over 70% of his starts.

In part two of this interview, Clement recalls the story of getting Tony Stewart to drive for his team in ARCA and reflects on his ARCA career.

Read part one of this interview here.

Haas: How did you get Tony Stewart to come down to ARCA?

Clement: A great question. I think that came about in 2001. Ron Dragor, the ARCA president called and he said, “Tony Stewart wants to run the ARCA race [on] Labor Day at DuQuion on a mile and he wants to drive one of [the] 46 cars,” and he said “we’d get some little sponsorship from the series and Bob Sargent, who’s a great promoter. He can come up a little bit.”

He [Dragor] said, “No, it costs a lot more money,” but I said, “Hey, let’s do it.” That was when we were first switching over from Chevys to Fords. Tony was running Pontiacs for Joe Gibbs. We have bought our second Ford. The first Ford that we bought was just a killer. It was a Mark Martin car that he finished second at Phoenix [Raceway]. This Ford that we haven’t even raced yet. We thought it was a really good race car and it was. We get that ready, and I went down to the Knoxville national sprint cars that year when Danny Lasoski was driving Tony’s car. Tony’s suite was right next to our Featherlite Trailers suite when we owned a Featherlite Trailer company [with] my brother and his two sons and I. I went down to qualifying night, and Tony [Stewart] saw and waved me over and I went into his suite. I said, “Hey Tony, I understand [that] we’re having fun playing in the dirt [on] Labor Day.” He was a little more wired back then [and] hadn’t mellowed out a whole lot, not that he ever will.

[Stewart said,] “Oh man, I got a problem.” I said, “What is your problem, Tony?” He said, “I thought you ran Chevys.” I said, “Well, we did until Ryan Newman came in with those Fords and kicked our ass, and I don’t like to lose.” He said, “I got in my contract that I can’t drive anything but a General Motors car.” I said, “Don’t worry about it, Tony. The time you’ll see it. It’ll be a Chevy.” He said, “What do you mean?”

I said, “Listen, all I got to do is change the rear window, remove the oval one and install the rectangular quarter window that Chevy used, change the grill and put a bowtie on it. It’ll be a Chevy.” Tony says, “Are you serious?” I remember like it was yesterday, I said, “Tony, ARCA wants you in that race bad enough, I could get a Studebaker through tech.” We did and I called Ron Dreger and he said, “Yeah, that works for me.” One of our guys put a sign on that car, on the front, it said Monte Taurus. He [Stewart] goes and breaks the track record in the car and then Frank [Kimmel] beat him by half a car length when the checkered flag. There aren’t many people gonna beat Tony Stewart on a dirt track.

Haas: [Racing Refernce] says the car manufacturer is a Ford, but it’s like a hybrid car that Tony Stewart ran?

Clement:  Yeah, it was officially a Chevy. I told Ron Drager, “When we go through tech, I said you’re gonna have to use your Ford templates for the body. Tony can’t drive a Ford so it’s a Chevy.” Ron said, “It works for me.” In fact, the next year Tony  came back with one of his own cars, Frank beat him by three car lengths that time. The third year [that] Tony  came back, I think Frank would have beat him again, except we had a car overheating. Every time a yellow came out, we had to come in and fill it with water.

Clement: Dan Falldorf actually physically owned the cars, but the ARCA records go by whatever number is on the car is officially the car owner for the points system. I had watched Frank [Kimmel] when we were running with Bob Hill in ’93, ’94 and ’95. Frank didn’t have good cars; he didn’t have winning cars under him. I used to tell him, “You know that used to tick me off, Frank. You would be out there in a car; you’d qualify 15th because the car wouldn’t go any faster than that. Late in the race, I’d see you out there in the second or third place.” I always thought, man, that guy would be something else if he had good cars under him. I guess I was pretty accurate because that’s what happened when he started driving my cars full-time

Haas: Do you think you would should have jumped up the NASCAR ladder higher with the success that Frank Kimmel had, or were you just content running?

Clement: We ran some NASCAR races in conjunction with Travis Carter, when he lost the Kmart sponsorship when they went bankrupt. We brought some sponsorship to them [and] put Frank in the car, and he ran good. We didn’t have the budget to do that full-time. That was never our goal.

A lot of people ask me, “How come Frank didn’t get a good NASCAR Cup [Series] ride?” I said, “Because of Jeff Gordon.” Until Jeff Gordon came along about age 19 and got a Hendrick [Motorsports] ride, most of the Cup drivers before that didn’t get a good Cup ride ’til they were about 30 years old. That was how it worked back then because the car owners didn’t think they had the experience and knowledge and everything it took to run at that level. That was the situation when Frank came along, and started driving my cars and started winning like we did, then he would have an opportunity for one of the good Cup rides full-time.

Haas: Would you consider yourself a Hall of Fame owner for what you’ve accomplished in ARCA?

Clement: I would think so. You look at what the other owners that are in the Hall of Fame [did]. There aren’t many of them that have won nine championships. There aren’t any of them that won nine championships in 10 years. If ARCA had a Hall of Fame, I’m certainly sure that Frank and I would be in it. As far as the Talladega Hall of Fame, I would think that we deserve merit anyway. I’m not out tooting my own horn. If something like that happens, fine. I was inducted in the Iowa Racing Motorsports Hall of Fame a few years back, and that was basically ARCA, Bob Hill and Frank got me in there. Believe it or not, I grew up in Newton, Iowa, and got inducted in the Newton, Iowa Baseball Hall of Fame [for] high school baseball along with my four brothers that all played baseball.