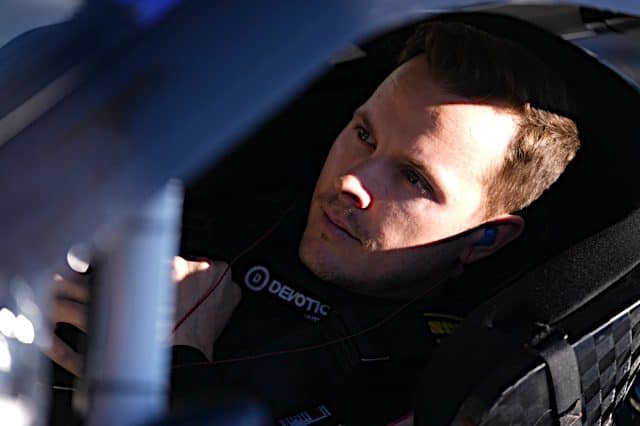 The Joe Gibbs Racing and Toyota portion of silly season — for both the NASCAR Xfinity and Cup series — may be the most interesting part to watch as we look toward 2023.

The crux of the 2023 driver lineup lies in Cup with Martin Truex Jr. Does he return to the No. 19 JGR Toyota for the 2023 Cup season, or does he leave? That decision will trickle down to Toyota’s lineup of drivers in Xfinity competition.

Trevor Bayne can be a beneficiary of not only his good fortune, but also Truex’s decision to leave or stay.

If Truex decides to return, the entire Toyota picture could become easier to fill out. Ty Gibbs returns to the No. 54 Toyota in the Xfinity Series, and Brandon Jones will likely return to the No. 19, which leaves the No. 18 and possibly a fourth JGR Toyota up for grabs. Then there is the seat — or possibly two — at Sam Hunt Racing.

SHR has run considerably better this season with John Hunter Nemechek, Chandler Smith and Jeffrey Earnhardt at the wheel. Leadership at SHR and Toyota will need to decide whether that team will have one full-time driver or two in 2023.

If JGR decides to expand back to four teams, leaving one for a full-timer and another as the all-star car, and SHR decides to run a single driver, there are several drivers from whom the teams could pick from.

“[…] I don’t know what comes of this,” Bayne told NBC Sports. “I don’t know if I end up back in a Cup car full time or an Xfinity car contending for championships. That’s what I would love to see happen.”

When looking at potential candidates to sign for a full-time drive, Bayne is one to consider. When his deal with JGR to drive the No. 18 was announced in February, seven races were announced, with an eighth at Atlanta Motor Speedway added later.

Bayne has tallied three top 10s and two top fives through four starts. The lone blemish was a 28th at Atlanta, where he was running second before being caught up in the Big One. But keep in mind that he’d been running in the top 10 for most of the race.

There’s a universe where Bayne won his second start of the season at Phoenix Raceway. He was the fastest car but got busted for speeding during the stage two caution and restarted the final stage at the rear of the field. The race ran green for the final 101 laps, with no chance for him to reclaim the lead during a restart. He drove through the field, though, finishing fourth.

Atlanta was going to be a toss-up with its superspeedway-style racing, but it’s certainly possible he could have won that race. After all, he is a Daytona 500 winner. Auto Club Speedway was a stretch, as he wasn’t the best car toward the end of the race, and at Charlotte Motor Speedway, he was just a top-10 car.

There are still three races without a driver for the No. 18. Those races are Atlanta (July 9), Darlington Raceway (Sept. 3) and the Charlotte Motor Speedway ROVAL (Oct. 8).

Denny Hamlin typically runs one Xfinity race per year, and it’s usually Darlington, and the Charlotte ROVAL will likely go to a road course driver like Connor Mosack. Maybe a last-minute deal can come together a few weeks before the Atlanta race here as well. But it looks like his remaining four races are it.

In five previous starts at Nashville, he collected five top-10 starts and three top-12 finishes. The other two finishes of 28th and 32nd were due to crashes, but Bayne is in the best equipment he’s ever been in when going to Nashville.

Looking at New Hampshire, Las Vegas and Homestead, they are statistically his best three tracks. At New Hampshire, Bayne has four top 15s, three top 10s and one top five through four starts. The biggest imperfection on his track record at the Magic Mile is an 18th-place starting position in his first start in 2010 with Diamond-Waltrip Racing. Not to mention that New Hampshire is comparable to Phoenix. Another strong flat-mile oval run could be in his near future.

Homestead is where Bayne will make his final start, and while he’s only led five laps there, he has two fifth-place finishes and two 11th-place finishes. He has three top-10 starts in his four races — all with Roush-Fenway Racing (now RFK Racing).

Las Vegas, where Bayne will make his second-to-last start of 2022, is where he is most impressive. He has three starts of 14th or worse out of five races, but started all of them in the top 20. The standout stat? His worst finish is eighth.

Las Vegas has been the single strongest track for Bayne not only in his Xfinity career but also in Cup. He spent the majority of his Cup career in lackluster equipment, but only Bristol Motor Speedway was a better track for him.

Only at one other track in the Xfinity Series can Bayne say his worst finish was a single digit. He raced at Mid-Ohio Sports Car Course twice and finished ninth in both events. But at Las Vegas, he has three top-fives to go with finishes of sixth and eighth through five races. Bayne and Vegas click.

So, for Trevor Bayne fans, mark his final four races of 2022 on your calendar. They are literally his best racetracks, and if he wants to come back and run more races, if not sneak his way into a full-time ride for 2023, these might be the most critical four races he’ll ever drive.

Bayne can’t control which seats will open, but by winning a couple of his final races this season, he can position himself as a strong contender for any seat that places a ‘Driver Wanted’ ad out.

Bayne hasn’t done great at Nashville, but he’s in a good ride this year. We’ve got Reddick Busch whacking again and Preece will be in the #5. Parker Retzlaff is in the field and he’s impressed me. Gibbs and Mayer will both make their Xfinity Nashville debuts as well. I’m leaning towards Gibbs, Allmendinger, Berry, Hill, and probably Reddick. Preece won here in trucks, I think, but I don’t know about the #5 team. Should be a good, competitive race. And we’ve got SRX.