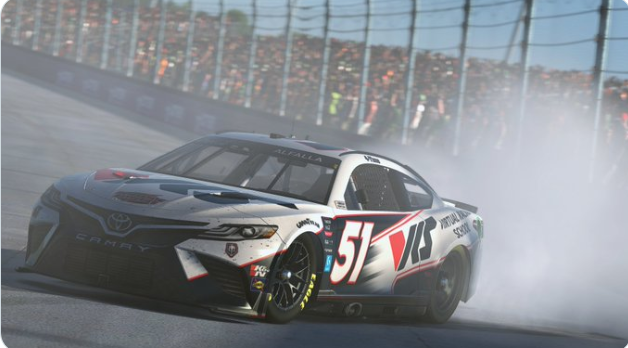 For Ray Alfalla, the first half of the 2022 eNASCAR Coca-Cola iRacing Series season was a struggle, sitting 21st in the standings with only one top-10 finish to his name. It was an uncharacteristically slow start for the 32-year old Alfalla, a four-time series champion (2011, 2012, 2016, 2018).

Alfalla now has a new lease on life after emerging victorious at Nashville Superspeedway for his first win of 2022 and the 27th of his eNASCAR Coca-Cola iRacing Series career, the most in series history. Alfalla drove his No. 51 Virtual Racing School Camry all the way up from his starting position of 37th to claim the win.

“Yeah, what a season it’s been for the VRS (Virtual Racing School) Camry,” Alfalla said in his post-race interview with Evan Posocco and Blake McCandless. “So happy to get back to victory lane. We messed up in qualifying, but got a good break with the yellow. Once we were up front, we felt we had a good chance to contend.”

IT'S THE 27TH CAREER VICTORY FOR THE FOUR-TIME SERIES CHAMPION, RAY ALFALLA WINS AT NASHVILLE AND ALL BUT CLINCHES HIS PLACE IN THE 2022 eNASCAR PLAYOFFS!#eNASCAR | @iRacing pic.twitter.com/QmeWxXfziS

This race on the 1.33-mile concrete oval at Nashville Superspeedway had its fair share of incidents, with five cautions scattered throughout the race. The first came immediately on lap 1, with a multi-car wreck knocking several notable drivers out of contention, including the No. 7 of Malik Ray, the No. 19 of Vicente Salas and the No. 46 of Jimmy Mullis.

After the ensuing the restart, the race settled into a 54-lap green flag run, with pole sitter Briar LaPradd in the No. 88 JR Motorsports Chevrolet and the most recent winner, Graham Bowlin, in the No. 48 Charlotte Phoenix Toyota combining to lead the entire first half.

Shortly after halfway, green flag pit stops began, and it was in the middle of that cycle that the No. 6 of Parker Retzlaff spun off of turn four to bring out the second caution, trapping the cars that already pitted one lap down and forcing them to take the wave around. This led to a new cast of characters up front, with Mitchell DeJong bringing his No. 23 23XI Racing Toyota to the point.

From there, three cautions in the final 16 laps changed the complexion of the race. The third caution of the race came on lap 84 when Bowlin and LaPradd, now both mired in the pack, made contact on the backstretch. It was under this caution that Alfalla and his team made the race-winning strategy to take two right-side tires, coming off of pit road first and restarting third behind Logan Clampitt in the No. 97 and Derek Bourdeau in the No. 42, both of whom stayed out under the caution.

Alfalla had just taken the lead from Clampitt on lap 90 when the fourth caution flag flew after the No. 21 of Garrett Lowe spun into the frontstretch grass and then came back up the race track, colliding with the No. 31 of Garrett Manes and knocking both of them out of contention.

Alfalla appeared to sail away on the ensuing restart when the fifth and final caution came out following another frontstretch wreck involving four cars, most notably defending series champion Keegan Leahy in the No. 45 Virtual Racing School Toyota for 23XI Racing.

The race would be extended by four laps into a NASCAR overtime. Alfalla got a good launch on the final restart and then held off a hard-charging Zack Novak to take the checkered flag.

Unfortunately for Novak, this meant that for the third race in a row he was the bridesmaid instead of the bride, scoring his third straight runner-up finish in his No. 5 Sunoco Chevrolet for Rise eSports.

“It just stings once again,” Novak said after the race. “I thought it was ours to lose. When you’re that close that many times, it gets frustrating.”

Blake Reynolds came across the line in third place, while Michael Guest and Michael Conti rounded out the top five spots.

So blessed to race for this incredible team. I am beyond excited to represent @Duracell! Colors are changed up a bit but our goals aren’t. Let’s go get it tonight! #WilliamsEsports #eNascar #NASCAR #iRacing #ontheway #all4Christ pic.twitter.com/a58If4e7iI

The eNASCAR Coca-Cola iRacing Series will return in two weeks to make both left and right-hand turns on the 4.048-mile road course at Road America in Elkhart Lake, Wis. The race will start at 9 p.m. ET, and it will be broadcast live on eNASCAR.com/live, YouTube.com/iRacing and Twitch.tv/iRacing.