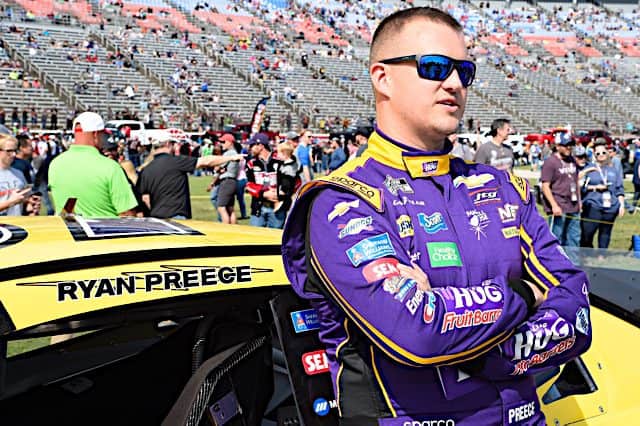 Usually during an off weekend for the NASCAR Cup Series the silly season rumors ramp up and things begin to get clearer as far as who will be in what ride for the following season. That did not happen this past weekend though, as the rumor mill remained quiet.

Yet, we do know of one open ride for 2023 and that is the No. 10 Ford at Stewart-Haas Racing. Current driver Aric Almirola will retire at season’s end and while there are several options to replace Almirola, the consensus has been Ryan Preece, who is technically a reserve driver for SHR this season.

However, so many things can change and just because Preece is under contract at SHR doesn’t make him a lock for the No. 10 car in 2023. That’s why it is called “silly season” after all. We pitched this question to our writers – is Preece still the favorite to replace Almirola at Stewart-Haas Racing? Stephen Stumpf and Michael Nebbia debate who will drive the No. 10 car in 2023.

Preece and What Else?

This says more about Ford’s developmental driver program than anything else.

Ford needs new blood, as the Kevin Harvick-era at Stewart-Haas Racing is nearly over. Ford’s best drivers this season are Ryan Blaney and Joey Logano. Chase Briscoe and Austin Cindric have shown promise, but there is a long way to go for them to consistently contend for wins.

So, who does Ford have to step up to the plate? Other than Preece, no one.

Their once strong Xfinity Series program has been gutted.

After Cindric graduated from the Xfinity Series at the end of 2021, Team Penske shut down the No. 22 Xfinity car. A seat that could’ve been used for driver development this year is no longer an option going forward. For SHR, their one Xfinity car is driven by Riley Herbst, who in 47 starts has a best finish of third in a car that won nine races with Briscoe in 2020.

ThorSport Racing left for Toyota after the conclusion of 2020, leaving David Gilliland Racing and Front Row Motorsports as the only Ford teams. Hailie Deegan has one top-10 finish for DGR since the start of 2021. Tanner Gray has been with DGR since 2020 and hasn’t contended for a race win. The best driver currently in the lower series for Ford is Zane Smith, who has won three times with FRM this season. But it would be too early to rush him to Cup without a year in Xfinity first.

In seven Truck races for DGR, he has scored a win and six top-10 finishes. Certainly impressive compared to his teammates.

However, Preece will be 32 in October and there are questions surrounding his previous Cup performances.

In his three seasons at JTG Daugherty Racing, Preece was paired with Chris Buescher in 2019 and Ricky Stenhouse Jr. in 2020 and 2021. Preece’s points finishes were 26th, 29th and 27th; Buescher was 20th in 2019, while Stenhouse was 24th and 22nd in ’20 and ’21. Preece had just four top 10s outside of Daytona International Speedway or Talladega Superspeedway in his three seasons at JTG. Buescher and Stenhouse combined for nine.

Even with Preece’s success in the lower series, the best indicator of Cup performance has always been Cup performance. Therefore, his head-to-head results against Stenhouse and Buescher will be a big question mark heading into 2023.

SHR’s best chance would be luring a driver like Tyler Reddick away from Richard Childress Racing, but the odds of that happening are unlikely. Therefore, Preece is the best option for the No. 10 because no one else in the Ford pipeline is ready.

Perhaps Preece will do well in the No. 10.

If so, great. SHR will have found another driver to lead the team after Harvick retires. But if he isn’t living up to expectations within a year or two, he shouldn’t be a long-term solution for the team.

Preece should get the No. 10 car for the time being, but Ford, SHR and Penske need to invest heavily in their Xfinity Series programs for the future. Joe Gibbs Racing has a three-car Xfinity team. Hendrick has a de facto four-car Xfinity team through JR Motorsports. There is zero excuse for SHR and Penske to have a combined one car. All of the greatest drivers work their way up from NASCAR’s lower levels, and Ford will be missing out on the best talent if they aren’t putting an effort into developing it. – Stephen Stumpf

Do people forget the mediocrity Preece showed at JTG Daugherty Racing? I know he’s talented, but a lot of talented drivers have made it to NASCAR’s top level and things just didn’t work out for him. Stenhouse, who did not set the world on fire in his time at Roush, significantly outperformed Preece at JTG Daugherty, as did Buescher, when he drove the No. 37 car for the organization as a teammate to Preece.

I think it’s time for Tony Stewart, Gene Haas, Joe Custer and the rest of the hierarchy at Stewart-Haas Racing to look no further than their own Xfinity program for the next driver of the No. 10 car. That driver just so happens to be Riley Herbst.

Sure, Herbst got off to a slow start in his first year in the Xfinity Series, but once he got his feet wet, he started rattling off top fives and top 10s, finishing 12th in the points last year.

In his second Xfinity season, he almost has just as many top fives and top 10s as he did all last season and we’re only 14 races in (he had five top fives and 13 top 10s in 2021; four top fives, nine top 10s so far through 14 races in 2022). Herbst has shown the consistency needed to be considered a championship contender and the leading candidate in the No. 10 car.

I also think Ford should look at some other internal options. Yes, their Xfinity program has just a few teams, but when you look at the Truck Series another candidate emerges. Look no further than Zane Smith who was recently tabbed to substitute for Buescher in the No. 17 Ford for RFK Racing when Buescher missed a race due to contracting COVID-19.

Co-owner Brad Keselowski gave Smith a ton of praise for his abilities, and he has been one of, if not the best, driver in the truck series the last few seasons.

I would also look at this past weekend’s truck series winner, Todd Gilliland.

Gilliland drives the No. 38 Ford for Front Row Motorsports. But there’s no doubt he is loved by the Ford camp and you can envision the No. 38 car as sort of a place to get Gilliland’s feet wet until the powers that be feel he is ready to take over a winnable and championship caliber ride.

Between Herbst, Gilliland and Smith there are better options out there than Preece.  – Michael Nebbia

It would seem to me like SHR is headed down the same path as Haas’s F1 money pit, performance wise. Both orgs would seem to be badly in need of a shake up leadership wise.

That having been said, with Brad K willing to take a huge step career wise to bring RFK back to where it once was, as well as the first glimmer of positive results at Sonoma. Ford needs to step up & render them every possible assistance. I think there’s more potential there, than at SHR.

After that cry baby blow up he had in the Truck Series a while ago I think his ego is greater than his talent. He had multiple chances and bombed out in all of them.

In his defense, Hocevar really messed up his day. He was close to pulling it off. Otherwise, he will probably have a mediocre career wining one or two races in the cup series. Similar to Almirola, which would probably make for a good transition for the team.

Herbst, are you kidding?? I’ve watched him since he started in ARCA. Not Good.. How has he maintained the Monster sponsorship? It sure isn’t because of his many trips to Victory Lane, even in ARCA. Preece raced marginal at best in the equipment at JTG, as no driver has had much success there. Reece can pop in for a modified race, and always contend for wins. That ain’t easy, as those cars are hard to drive. Is Ryan the long term answer, I don’t know. It’s hard to say one way or another, because he’s never had good equipment and a good team with financing. I think Zane Smith is really good, but I’m not sure that he’s ready yet. But if SHR did move him up that quickly, they’d have to be willing to fund a couple of rough seasons while he learns. Isn’t that exactly what SHR is already doing with Cole Custer. If his dad wasn’t running SHR, would Cole still be there? So does Gene Haas want to self fund 2 Cup teams and an F1 team? I think SHR will need to fill 2 seats at the end of the season.

Ford really does need to get their head back in the game, and support the truck & Xfinity series beyond Herbst & DGR. Unless of course if they are ok with they Chevy & Toyota teams funding Ford’s driver development program. I do think that Ford has thrown some cash at the Ryan Seig team. He’s running better, but I don’t think that he’ll make the jump.

I don’t think that there are any really good, established drivers coming available this year. But hey, that’s why they call it Silly Season. You never know what’s going to happen. But of this group that are talked about in this article, I’d take Preece all day long.

Well Stephen, I guess you haven’t seen Preece in a Modified!

Preece is the driver for the 10 car give him a chance all he needs is good equipment.