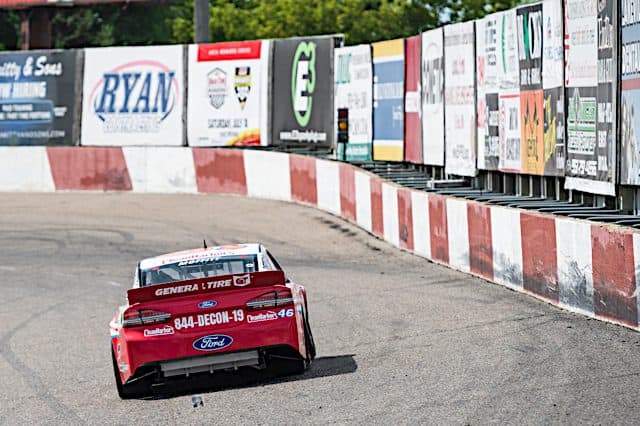 The ARCA Menards Series moves from one short track to another this weekend in Elko Speedway for the Menards 250.

Will the Minnesota race course bring fireworks once again?

Last season saw Corey Heim grab the lead away from Ty Gibbs in the final few laps at the 0.375-mile track, vastly different from what transpired at Berlin Raceway last week. In that event, Daniel Dye dominated only to suffer a mechanical issue with less than 10 laps left. As a result, Sammy Smith took the lead and earned his first ARCA Series victory.

Dye and Smith are two of the 20 drivers vying for the trophy in the eighth race of the season, with the former looking to rebound after his disappointing finish at Berlin.

The 18-year-old Florida native finished seventh in his ARCA debut at Elko last year, but hopes to take what he’s learned and bring home a checkered flag.

“Elko was a different experience for me last year and I kind of felt like we were a little behind all day,” Dye said in a team release. “Now that I’ve seen the place and had some laps, I’m sure we’ll be able to get the car handling more how we need it for the race and will put our GMS Chevrolet in contention again.”

Smith, meanwhile, will attempt to go back-to-back in the No. 18 of Kyle Busch Motorsports, the same number in which Gibbs led 236 laps a year ago. The 2021 ARCA Menards Series East champion has finished in the top five in all three events he’s run this year. In fact, he’s earned top-three results in each of his last four ARCA races, going back to Bristol Motor Speedway last year.

“Come off the corners,” Venturini Motorsports team owner Bill Venturini Sr. told Frontstretch about how to best drive at Elko. “The competition is really tough this year. There are a good eight or nine cars that can win at any given time. ARCA has done a good job equalizing the field.”

It’s similar to the North Carolinian racetrack Hickory Motor Speedway, according to Venturini and the No. 20 crew chief Shannon Rursch.

New Jersey-native Hessert described how the track might change during the 250-lap race.

“Billy [Venturini, the team co-owner] had those three races open on the schedule and it’s at three tracks we used to run well at so it made sense,” Tom Hessert told Frontstretch. “It’s a pretty slick little race track like this [Berlin Raceway]. So just be smart and be there at the end. Be competitive. It’s been a while but fortunately we’re in a great race car and have a good team so try to get a top five or better and hopefully be in contention.

“The cars will change a lot with the tires, the sun will go down, the track will change, and we’ll see what happens.”

Caruth has finished in the top five in four events this season, his latest one at Berlin a week ago. He placed third in last year’s ARCA East race at Southern National Motorsports Park, a 0.4-mile track.

His Rev Racing teammate Sanchez doesn’t have as many top fives so far, sitting just one point below Caruth in the standings. But he knows that as long as he keeps his car free from damage, he can contend for the win if things get wacky at the front (like with Heim and Gibbs).

“Overall as a team, we’ve gotten faster on these [short] tracks so we’ll see if we can improve our positions from last year,” Sanchez told Frontstretch. “Honestly, you have to get through that race and keep it clean. Then you have to be there at the end.”

Another 2022 victor, Taylor Gray, is also in the mix for the win at Elko. He was out front for 43 circuits at Phoenix Raceway en route to the victory, while last week at Berlin he snagged a fourth place.

But Elko is especially meaningful for Gray, as he finished fifth in his first event back from an injury.

“Elko was my first race back last year after getting hurt,” Gray told Frontstretch. “It’ll be good to go back there and improve upon what we’ve learned.”

As far as the racetrack, Gray likens it to the Bullring at Las Vegas Motor Speedway, where he dominated the 2021 ARCA West event.

Rette Jones Racing’s Amber Balcaen, who’s fifth in points with three top 10s, wants to bounce back from a crash at Berlin.

“I’m still a little upset with myself as I mentioned on MAVTV on Saturday night,” Balcaen said in a release. “As a race car driver, you push and sometimes you push so hard you find yourself in trouble. I made a mistake on Saturday night because I wanted so much to continue to propel our race team forward.

“And believe me, I will continue to push, but I think I will somewhat limit my expectations and just do what the car is able to give me at that exact moment. I’ve never been so ready to rebound and I’m glad we’re going back to another short track for a chance at redemption.”

Balcaen added: “I was happy with our speed in practice at Berlin, so if we can continue that pace at Elko and then just take one lap at a time on Saturday night, then hopefully we can find ourselves somewhere nestled inside the top 10 when the checkered flag waves.

“It’s important for us to remember, if we focus on our finishes, the points will then take care of themselves.”

He’s earned four consecutive top-10 finishes, including a fifth at Charlotte Motor Speedway. He may be ranked sixth in the standings, but he could very well get a top five this week. Last year at the half-mile Winchester Speedway he was runner up to Ty Gibbs, showing just how strong he is on shorter tracks. As long as his equipment holds up for 250 laps, Van Alst should be around there at the end.

The Menards 250 airs on Saturday, June 25 at 9:30 p.m. ET on MAVTV Motorsports Network and FloRacing.