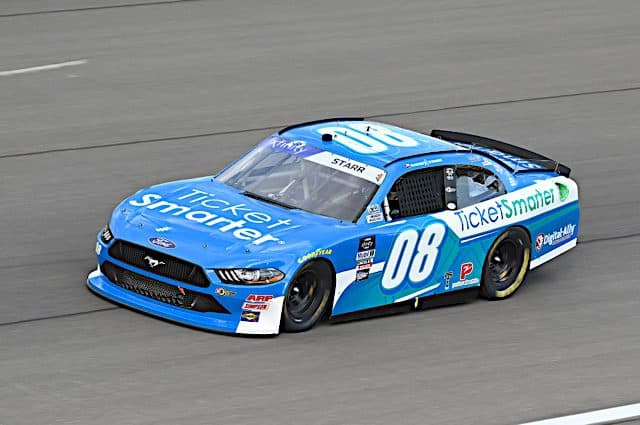 BJ McLeod will fill in for an ill David Starr for the June 25 NASCAR Xfinity Series race at Nashville Superspeedway, Starr announced via Twitter.

In a statement, Starr stated that he tested positive for the flu after previously testing negative for COVID-19.

“I am disappointed to share that I will miss this weekend’s race at Nashville,” Starr’s Twitter statement said. “I have not been feeling 100% this week. Initially, I felt like I had a cold, but then I got a fever and that’s when I knew I might be sicker than I thought….

“As a race car driver, you never want to step out of the car for any reason. I cannot thank my good friend BJ McLeod enough for filling in for me while I recover. I know my #08 TicketSmarter Ford Mustang is in good hands with BJ. Thank you to the SS Green Light [Racing] team for everything. And a huge thank you to my fans and sponsors for understanding.”

Starr has attempted all but three races this season with SS-Green Light Racing, with four DNQs and a best finish of 21st at Texas Motor Speedway. The team won its first ever race in their 27-year history, when Cole Custer took the No. 07 to victory lane at Auto Club Speedway.

McLeod, on the other hand, will be attempting his season-debut in the Xfinity Series, as he has focused his efforts on his Cup Series team, Live Fast Motorsports, where he has a best finish of 19th (twice) in 13 starts. His Xfinity team, BJ McLeod Motorsports, currently holds a best finish of fifth on the season, at the hands of Ryan Preece, driving the No. 5 at Charlotte Motor Speedway.