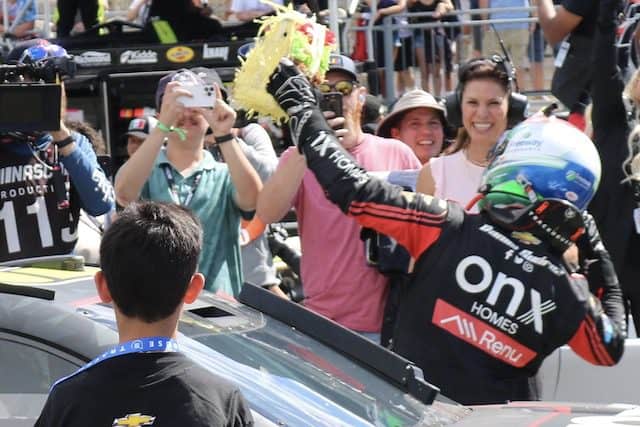 After adding races in Los Angeles, Nashville, and St. Louis, does NASCAR really have anything to gain by dropping Road America for a street race in Chicago? Edward S., Durham, N.C.

To make a long story short: yes. NASCAR, billion-dollar company that it is, has access to the kind of market research and data that us mere mortals can only dream of, and NASCAR wouldn’t do anything without knowing for sure it would be financially worth it.

Backing up a bit, Adam Stern reported for Sports Business Journal on Friday (June 17) that NASCAR is close to a deal that would send the NASCAR Cup Series to a street race in downtown Chicago, presumably on the lakeshore, at or near the location of the fictional Chicago street circuit that debuted on iRacing last summer.

.@NASCAR is getting closer to announcing a new street race in Chicago that would start next year, per sources.

🔲 Not yet clear who would lose a race, but NASCAR appears open to dropping a road course and Road America doesn’t have a deal yet for 2023.

The fact that Road America in nearby Elkhart Lake, Wis. does not have a contract for a 2023 event, and that Steve Phelps indicated to NASCAR on FOX that the series was happy with the number of road courses currently on the schedule, has led to much speculation that the historic 4-mile venue will lose its Independence Day weekend Cup date for 2023.

Now, I must admit over the last several years I have become quite a fan of street races. I’ll concede that they don’t always make for the most thrilling TV for the NTT IndyCar or Formula 1, but the at-track (technically, not-track) experience is second to none.

Race cars on regular roads is a spectacle, one that makes motorsports look truly awesome to attendees with only casual knowledge: To those of us who watch NASCAR weekly, a street course might not look all that fast, but to someone used to being stuck in traffic at the intersection Chase Elliott just took at 120 mph, it’s otherworldly.

See also
Heading Back to Nashville Superspeedway, For Better or Worse?

NASCAR’s first modern-era experimentation with temporary venues came at February’s Busch Light Clash at the Coliseum, on a quarter-mile bullring constructed inside the Los Angeles Memorial Coliseum in the heart of the City of Angels. The event was an undeniable success, drawing an estimated crowd of 60,000, with approximately two-thirds of spectators reporting that it was their first time attending a NASCAR event. Importantly, it drew in over four million viewers on FOX, up over 150 percent from the previous year’s Clash, which was also held on a new track: the infield road course at Daytona International Speedway. The Clash at the Coliseum was recently confirmed to be returning in 2023.

We’re so excited to return to the @lacoliseum on Feb 5, 2023 for the @BuschBeer Light Clash! Don’t forget to sign up to be notified when tickets go on sale. You won’t want to miss it!

NASCAR is almost certainly taking the Clash at the Coliseum as proof of concept for “pop-up” events in non-traditional NASCAR markets: hence, moving forward with the Chicago street race proposal.

Of course, non-traditional is the operative word here: although the first sanctioned auto race in North America was held on the streets of Chicago in 1895, and stock car racing was born on the streets and beaches of Daytona, street racing is totally alien to modern NASCAR. Then again, so was dirt, and we all saw what happened there.

Right now, NASCAR is an underdog in the sports market, and as negotiations for new TV deals hang over the 2023 and 2024 seasons, anything the sport can do to generate headlines and draw eyeballs is a good thing for the health of this industry, especially since once those eyeballs are paying attention, the racing product is the best we’ve had in a long time.

It is unfortunate that this race will likely come at the expense of Road America because of how well Elkhart Lake’s many fans responded to the Cup Series’ long-overdue return last July, to say nothing of the nearby Milwaukee Mile and Joliet’s Chicagoland Speedway, both of which arguably deserve Cup dates as well. The problem now is there are more worthy locations than available weekends, which, for a sanctioning body that’s proven itself more willing than ever before to change schedules around, is a good problem to have.

Besides, the Los Angeles market has technically been served by Fontana’s Auto Club Speedway since 1997, but somewhere between 33 and 40 thousand people attended their first NASCAR race in the Coliseum. Three weeks later, Fontana also saw its best crowd in years. The data doesn’t support the fear that a Chicago street race would cannibalize audiences from another race elsewhere in the greater Chicago-Milwaukee area. More likely would be the opposite: a headline-generating street race could turn more than a few Chicagoans into race fans willing to travel an hour or two to see another race at a more traditional track later in the year.

And just to preemptively address the bad-faith arguments: according to the most recent FBI data, Chicago’s per-capita violent crime rate is approximately half that of new Cup Series host St. Louis. There would not be any significant safety risk to holding a street race in the most tourist-friendly district of one of the nation’s most historically and culturally significant cities.

Is [Sonoma winner] Daniel Suarez going to be a one-win wonder, or will he find victory lane again? Ashley L., Vernon Hills, Ill.

As a pessimist and often-heartbroken fan of the underdogs, I didn’t truly believe Daniel Suarez would ever win a Cup race until he did.

When he first announced the concept two years ago, I was initially dismissive of Justin Marks’ vision for a revolutionary new kind of NASCAR team. But I, like all of Trackhouse’s doubters, have been proven wrong many times over.

Trackhouse was perfectly positioned to take advantage of the engineering clean slate offered by the switch to the Next Gen car, and has transcended its previous mid-pack results to become arguably the best team of 2022.

Before 2022, neither Suarez nor teammate Ross Chastain had ever won a Cup race, nor made the Playoffs. Yet two races before the halfway point of the season, they are both winners and (presumably) locked into the postseason. Chastain is within sight of the regular season points lead and the team shows no signs of slowing down. How could Marks have pulled this off?

They can’t be building better cars than anyone else, thanks to the mile-long list of single-source parts bolted to every Next Gen chassis. While both drivers are undeniably talented, neither had ever shown this type of consistent speed before.

I’ve learned my lesson now, as should we all. Let’s take Justin Marks at his word. It’s about the culture.

Suarez, when asked after Sonoma about his contract for next season, told NASCAR.com that even before his win, they had pushed the negotiations down the road, saying “this is my home, I’m not going anywhere. … I’m 100% sure things are going to work out.”

Before signing multi-year deals at Trackhouse, both Suarez and Chastain had only ever been in the position of racing for their careers. But at Marks’ team, Suarez describes feeling “support and trust … like I had never before felt in the Cup Series.”

Yes, it’s a cheesy line that Marks continues to press, insisting after each victory that the team wasn’t expecting to be concerned with race wins, playoffs, and championships so early in its existence, but for the only NASCAR personality with a tattoo commemorating his respect for Buddhist philosophy, it shouldn’t be a surprise that Cup Series success has followed a Middle Path of realistic expectations, long-term commitment to his people, and an emphasis on fun.

The day @Travis_Mack99 signed with @TeamTrackhouse – so proud of him. Thanks for believing in us Travis. Congrats on your first @nascar Cup Series win as a crew chief. pic.twitter.com/mLIdtpYGRZ

Old-fashioned popular wisdom might suggest the best way to get results out of a driver is to put their feet to the fire, a little carrot-and-stick action. But as talking openly about mental health is increasingly destigmatized in motorsports, thanks to Cody Ware’s advocacy among others, it was only a matter of time until someone in NASCAR was able to turn it into a competitive advantage. We’ve always talked about ‘momentum’ as an element that determines how well a race team performs — really, that’s just another way of saying a confident, positive attitude.

Over in F1, drivers have made working with sports psychologists an integral part of training, and Mercedes-AMG’s “no-blame” corporate environment let them capitalize on the 2014 change in technical regulations, setting off a tear of eight consecutive world titles before Red Bull Racing caught up. Mercedes-AMG’s corporate culture encouraged innovation by not punishing failure, and the team used that to design some of Grand Prix racing’s most dominant cars (three words: dual axis steering).

While NASCAR’s completely different competitive structure makes dominance like that (thankfully) impossible, I have wondered for a few years now when “no-blame” culture would make its way Stateside to NASCAR. While Marks, Ty Norris, and Pitbull have put their own spin on it, (I doubt Valtteri Bottas got to smash a piñata full of money whenever he won a Grand Prix) the “no-blame culture” may have found its equivalent in NASCAR with multi-year deals for Suarez and Chastain that allow the drivers to race without having to race for their careers.

When @pitbull throws you a taco piñata, there’s only one thing to do!! 🌮 pic.twitter.com/exR4oFlLKd

Marks’ longer-term commitment to his drivers has taken the pressure off of them to deliver results immediately, and ironically may have been just the thing that allowed them to grow into front-runners. On a recent “Ask Me Anything” on Reddit’s r/NASCAR, Marks said his favorite thing about team ownership is, “seeing people enjoy their jobs.” It’s cheesy stuff, but it’s working.

Going back to your question, I think that Daniel Suarez is going to win again because the Next Gen platform is doing its job of equalizing the field on car performance. Trackhouse’s culture is what’s making the difference, changing the conventions of NASCAR and coaxing the maximum performance out of all of its team members, particularly its drivers.

Now you can explain what happened to Joliet, after the owner built such an outstanding facility.

Has something to do with how covid restrictions affected some states but not others in red states vs blue states.