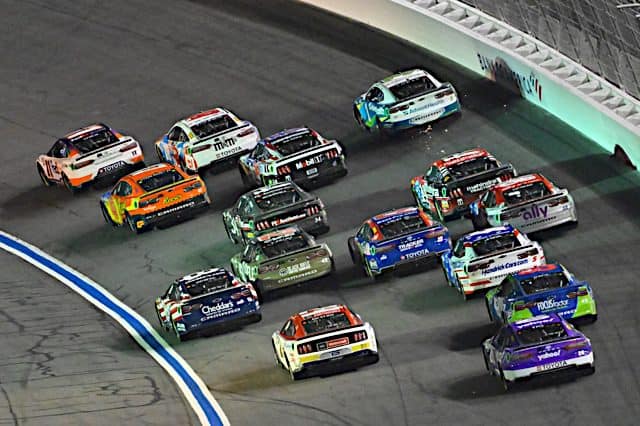 The 2022 NASCAR season has reached its halfway point.

Okay, not exactly. We just call it that because it’s close enough to the mid-season point for the NASCAR Cup Series and we just had a week off; in reality, we’re just shy of halfway for Cup, not even close to halfway for the Xfinity Series and more than midway for the Camping World Truck Series.

Whoaaaaaaaa, livin’ on a prayer

Maybe not living on a prayer, per se, but definitely almost halfway there.

With all that said, let’s break down the three series and where we’re at as the push towards the playoffs begins in earnest at Nashville Superspeedway this weekend.

Next Gen. Parity. Wheel issues. You’ve heard all these for more than four months this season.

There’ve been 12 different winners across 16 races, a third of them first-time winners: Austin Cindric led off the season with his Daytona 500 triumph, while Chase Briscoe and Ross Chastain followed in later races with their first career victories. Most recently, Daniel Suarez dominated late at Sonoma Raceway for his maiden win.

Hamlin leads a Joe Gibbs Racing stable with just one win outside of the No. 11 crew, which came in the form of Kyle Busch on the dirt at Bristol Motor Speedway. Busch ran well enough to be in position to capitalize as Briscoe and Tyler Reddick made contact to end both drivers’ chances at a victory, but teammates Martin Truex Jr. and Christopher Bell still haven’t found the winner’s circle in 2022. Truex came close at Las Vegas Motor Speedway while battling Busch, but a late caution made it a Hendrick Motorsports 1-2 instead of a Gibbs 1-2.

Speaking of Hendrick, Chase Elliott leads the points but was the last driver — by quite a bit — in the stable to finally secure a win. Kyle Larson and Alex Bowman won the second and third races, respectively, while Byron claimed two wins in a four-race span and nearly won a third in that window at Richmond Raceway.

Also winning in that span was Chastain at Circuit of the Americas, and the “Melon Man” followed that up less than a month later with a triumph at Talladega Superspeedway. Suarez’s win at Sonoma — which meant Trackhouse Racing Team swept the two road course races in the first half of 2022 — means both of the team’s machines are locked into the postseason, barring more than 16 total winners.

That seems within reach, though. Ryan Blaney is the only Team Penske pilot yet to win, securing the million-dollar All-Star Race prize at Texas Motor Speedway but so far failing to triumph in a points race. His impressive late-season performance last season means he’s still a threat and sits fourth in points, in position to make the playoffs provided a slot to make it on points still exists.

Blaney, Truex, Bell and Aric Almirola are the four drivers who’d make the postseason on points if the regular season ended today, but the winners problem is still looming on the horizon. All four have the ability to win, but that’s counteracted by the ability of a number of other drivers below the cutoff having solid runs in 2022 as well.

Chief among them is Reddick, who’s come oh-so-close multiple times, particularly Fontana and Bristol dirt, only to have extenuating circumstances send his chances at a victory spiraling. Michael McDowell was no slouch at Sonoma, running third, and neither was eventual runner-up Chris Buescher (so keep an eye on both at these upcoming road courses). Erik Jones has exceeded expectations in the No. 43 and 2021 Talladega winner Bubba Wallace have shown speed, though past champion Brad Keselowski‘s first season as a Cup owner-driver has been lackluster.

Don’t count out rookies Todd Gilliland and Harrison Burton, either. Daytona could be an all-out dogfight amongst 10 or more drivers throughout the field.

There’s been plenty of wild moments, too. Daytona devolved into a wreckfest after Burton’s flip and Atlanta’s debut as a superspeedway was fascinating, while COTA featured a three-car, fender-banging battle for the victory. Bristol ended as described above, with Briscoe and Reddick spinning in the final corner, the Coca-Cola 600 might’ve been the best in more than a decade and Gateway’s debut for Cup featured plenty of flared tempers.

Don’t forget Buescher’s flip in the 600, which was one of the weirdest in the past decade or so: in Cup, it’s the first tumble that wasn’t a blowover or weight-shift flip since David Reutimann’s violent crash at Watkins Glen in 2011.

Repeat winners have been more of a theme in Xfinity, where four different drivers have won multiple events through fewer races than Cup. Ty Gibbs‘ three wins lead all drivers, while AJ Allmendinger, Noah Gragson and Josh Berry each have two.

It hasn’t been without its share of weird and wild moments: from Myatt Snider‘s flip at Daytona to Gibbs and Sam Mayer fighting at Martinsville to Allmendinger’s wild comeback at Portland amid rain-induced chaos, the Xfinity playoff opening continues to swing wide open and bang into the framework like a creaky screen door in a horror movie. No one outside of a select few are safe, not even winless defending series champion Daniel Hemric, and nearly half the postseason spots are still up for grabs.

Zane Smith is tied with Gibbs for the most points wins of any driver across any of NASCAR’s three primary series, but has gone cold of late: after scoring his trio within the first eight races, he’s winless in the past month. That’s not to say his stats have suffered: his previous four races have all featured finishes of ninth or better, three of those in the top five.

That said, part-timer Corey Heim has been impressive, already winning two races, while defending champ Ben Rhodes has one victory thus far. Contrary to Xfinity, though, where less than 15% (2 of 14) races have been won by points-ineligible participants, that percentage skyrockets to just under 50% in the Truck Series. It’s been a season, at least so far, nearly half-dominated by part-timers and drivers from higher divisions.

Drivers like Ben Rhodes and John Hunter Nemechek have just one win apiece. Carson Hocevar, so close so many times, hasn’t found victory lane thanks to seemingly endless instances of bad luck. Neither have perennial winners Matt Crafton or Grant Enfinger.

The trucks, too, have had their own oddities, especially within the past week. Jessica Friesen rolled over at Knoxville, followed by an on-his-side Brett Moffitt scraping down the frontstretch wall in the same race.

What a weird year for all three series all the way around.

A little bit of everything, it seems, as each division faces a slate of tracks all over the place in terms of on a map and in layout configuration.

For Cup, the 10 races leading up to the cutoff consist of three road courses, two superspeedways (three, if you count Nashville by name alone), one triangle, one two-mile track, one flat oval and one short track. Xfinity has a whopping 12 races left until the playoffs, while trucks have just three: Nashville kicks it off, followed by Mid-Ohio and Pocono.

Settle in, y’all. This should be fun.

Three things jump out for me.

1 Faux is in the rear view mirror, yeah!.

2 NASCAR has been aware of the wheel issue from Daytona, & has done absolutely nothing to help correct it.
Both Penske, & RFK figured out that the wheel pin holes needed to be eased before Daytona, & both had already tried it on wheels but didn’t run the modified wheels. NASCAR, after confiscating them, allowed the modification that these teams had already figured out.
But they’ve done nothing to further improve wheel seating, & teams are still losing wheels. Being fined & having crew members suspended.

3 Kyle Larson has proven to be mortal, after all. And while Elliott is every bit as good on road courses as he was. He’s no longer in a class by himself.