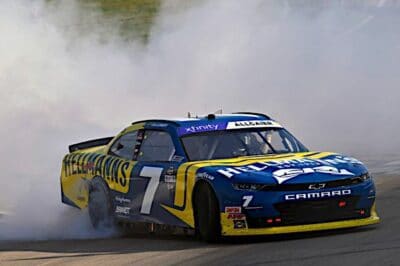 It’s his second win of the year for the JR Motorsports driver and 18th in his Xfinity career.

Allgaier took the lead from AJ Allmendinger late in stage three and never looked back en route to victory.

“I don’t think ever,” Allgaier told NBC Sports when asked when he had a car that dominant. “You fans that stuck around here in this heat, thank y’all very much. What a heck of a race, man. We’ve been coming here a long time, love this racetrack, been trying to go to victory lane so bad and I haven’t been able to do it. Today was for the dirt racers, though, because it was slick, it was hot, just sliding around. Just proud of this team, everybody at JR Motorsports the Hendrick engine shop…

“It was hot, but i know you all were a lot hotter there in the grandstands so thank you guys for sticking around and watching a great race. That’s the best I’ve ever ran…”

Stage one went caution free as Allmendinger started out front but was passed by Allgaier on lap 19. The No. 7 went on to win the stage as those behind him fought hard for every spot they could get.

Pit road is where things got dicey, though. Herbst clipped a tire and crew member of Bayne’s team, knocking the tire out of his hands. The crew member continued but had his foot taped up.

Also on pit road, all three Kaulig Racing cars sped and had to restart at the back.

Josh Berry had some radio issues during the opening stage but it started working after several laps.

In stage two, Allgaier once again drove out to the lead, while Ty Gibbs and Sam Mayer got in second and third. But Allmendinger, who drove from the back, told his team his right foot was hot and blistering. The No. 16 driver is also slated to run in the Cup Series race on Sunday.

The heat also affected other drivers, as Natalie Decker’s cool suit failed, while Mayer also was hot in his No. 1 as his hose was blowing out hot air. Mayer ended up speeding on pit lane and restarted stage three in the back.

Back at the front, the No. 7 claimed the stage two victory, extending JR Motorsports’ stage win streak to 12.

However, Ty Gibbs got out ahead of Allgaier during this caution. The pair battled for first for the next several laps before the No. 7 got on the apron off of turn 4 to retake the position.

Soon after, Josh Berry spun around right in front of Ryan Preece, who also slid a bit and eventually making slight contact with the No. 8’s right front.

Another caution flag waved when Jeffrey Earnhardt got loose while racing underneath Sheldon Creed, making slight contact and turned around.

Several cars pitted during this caution, including Bayne, who was penalized for equipment interference. He had to drop to the back as a result.

And as the saying goes, cautions breed cautions. This time, it was for a much bigger incident between Jeb Burton, Creed and Joe Graf Jr. All three cars crashed hard in the outside wall; Graf exited from his car on the track, while Creed went to the garage with a broken track bar. Burton also went behind the wall and out of the race.

Multiple cars are involved in an incident in Turn 1. pic.twitter.com/uWTo5PV20S

Allmendinger, Jones and Gragson pitted earlier than Gibbs and Allgaier, so they restarted ahead of the Nos. 54 and 7.

As Allgaier worked his way through those three, Mayer appeared to get Gibbs slightly loose in the left rear. Gibbs slid around and back into the No. 1, which straightened Gibbs out. The race stayed green, and Allgaier took the lead away from Allmendinger.

Gragson, Jones and Allmendinger all eventually pitted for fuel and some tires, while Allgaier built over a four-second lead to win the race.

The Xfinity Series turn left and right at Road America next Saturday, July 2. Coverage will air on USA and Motor Racing Network radio.