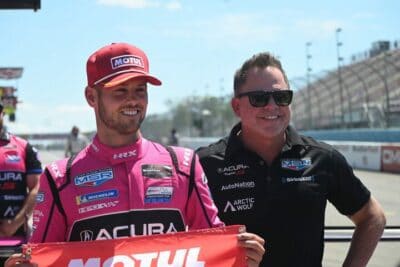 WATKINS GLEN, N.Y. – Meyer Shank Racing with Curb-Agajanian’s Tom Blomqvist continued his stranglehold on the speed charts Saturday (June 25) by setting a new track record at 136.638 mph to win the pole for Sunday’s Sahlen’s Six Hours at the Glen.

Blomqvist took the pole with what was really his second-best lap.  He had set a personal best in the first sector and the quickest of all in sector two on his previous lap, only to be held up in the last couple of turns by Era Motorsport’s Dwight Merriman.

In LMP2, PR1 Mathiasen Motorsports’ Ben Keating is typically the strongest qualifier in the class.  This remained true on Saturday, but he had to fight for it.

Keating turned in a lap at 130.310 mph to put himself on top.  Teammate Steven Thomas challenged late in the session and set a lap just one-thousandth of a second slower over 3.4 miles.

Shortly afterwards, Andretti Autosport’s Jarett Andretti hit the wall exiting turn 11.  He was able to continue down the track, but his left rear tire went down, triggering a spin in turn 1.

Andretti tried to pull off, but could not get far enough off of the racing surface to not trigger a red flag.  As a result, Andretti lost his two best laps.  At the time, Andretti was third in class.  He’ll start in .

The session did not resume after the red flag.  As a result, Varrone will start from the class pole.  He ended up more than a half-second ahead of Sarchet.  CORE autosport’s Jon Bennett will start third, then Performance Tech Motorsports’ Dan Goldburg and Riley Motorsports’ Gar Robinson.

There was also a penalty given to Sean Creech Motorsports’ Dr. Lance Willsey for illegal touching and leaving the car early.  Both are illegal in IMSA qualifying sessions.  As a result, the team loses all their times and points from the session.

GTD Pro qualifying at first was much like the first two practice sessions of the weekend.  The Heart of Racing’s Ross Gunn put his Aston Martin at the top of the charts early on.

As the session continued on, the rest of the class put it to Gunn.  Vasser Sullivan’s Ben Barnicoat and Risi Competizione’s Davide Rigon took their turns at the front of the pack.  However, it was BMW M Team RLL’s Connor de Phillippi who won the GTD Pro pole with a lap at 116.844 mph.

In GTD, Turner Motorsport’s Robby Foley set a quick lap at 116.100 mph halfway through the session for everyone to take on.  The primary competition turned out to be Team Korthoff Motorsports’ Stevan McAleer.  Despite running the entire session with his right turn signal on, McAleer was able to set a lap at 116.486 mph to win the GTD pole.

Two cars failed to take time.  They were the Hardpoint Porsche, due to be qualified by Rob Ferriol and Gradient Racing’s Acura NSX GT3 Evo22 that Kyffin Simpson was going to qualify.  This is due to the crash involving Simpson and Katherine Legge during the second practice session Saturday morning.

The Sahlen’s Six Hours at the Glen is scheduled to go green at 10:45 a.m. ET Sunday morning.  Coverage of the race will start exclusive to Peacock at 10:40 a.m.  The whole race will stream on Peacock, but USA will pick up live coverage starting at 2 p.m.