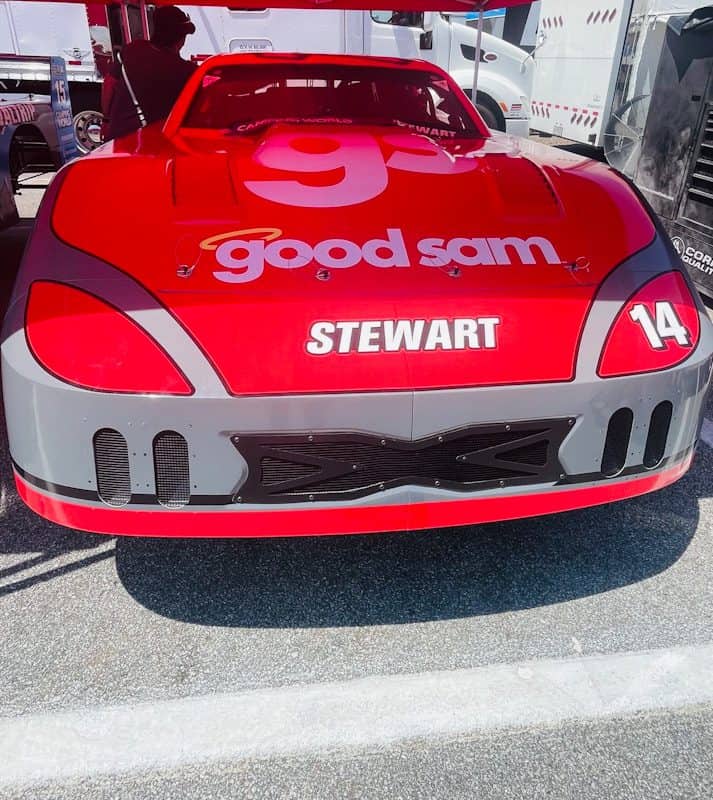 Stewart earned the most points in the heat races to start on the pole, with Marco Andretti starting alongside. The SRX Fun Flag came out 25 laps into the 100-lap feature. On the restart, Paul Tracy got caught up in his second incident of the night (see below) thanks to Ryan Hunter-Reay to immediately bring out the caution again.

Stewart jumped out to the lead again on the following restart. The caution came out yet again when Biffle and Andretti came together racing for second, with Andretti being the victim, as he spun off of turn 4.

A few laps after the restart, Hunter-Reay made an aggressive move on Michael Waltrip, sending the latter sliding into the outside wall. As the field rolled around under caution, Waltrip intentionally ran into Hunter-Reay under caution several times, with the last hit ripping Hunter-Reay’s right front fender loose. Waltrip then parked his car on pit road and told CBS Sports that he was not done with him.

“I just got dumped,” Waltrip said. “He just got into me and never let me go. I just don’t understand how that can happen.

“…And so he’s going to hear from Uncle Mike… We’re not going to have a beer tonight.”

“I’m not really worried about it, to tell you the truth,” countered Hunter-Reay.

Stewart was able to hold off Biffle for the final 26 lap stint to win his third career SRX race.

“When you got fans of South Boston cheering like that every time you get the lead, by God you’re not going to let them down,” Stewart said in victory lane.

Tempers were the biggest issue of the night. Outside of the Waltrip/Hunter-Reay incident, it seemed like everyone had an issue with everyone. Following his run in with Castroneves in the second heat, Tracy made it clear that he was going to pay back Castroneves — who Tracy now insists on calling “Castro” because, “He loves to steal wins from me.” It’s a reference to the controversial finish of the 2002 Indianapolis 500, where Castroneves was awarded the victory despite numerous protests by Tracy’s team.

Stewart himself had a very heated conversation with Ernie Francis Jr. following the second heat. Stewart could be seen physically grabbing Francis and yelling at the Trans-Am star over the way he raced Stewart in heat two.

“Trust me, I know every dirty trick and got it in my bag,” an irate Stewart said. “…When you’re following somebody and the guy’s on the outside, and as soon as he gets clear he just turns down across, that’s the dumbest s–t you can do, I swear to God.

“I’m just done playing nice with everybody. Anybody that touches me, I’m touching back x5, so… just done jacking with some of these clowns.”

However, Stewart did praise Francis Jr. for his talent, which Stewart said is why he was so upset, because Francis is “too talented to do dumb s–t like that.”

“I’m not going to take that from him,” Francis said “I know he’s the boss, but you know, rubbing is racing out there.

“For him to hit me under caution, that’s kind of a dirty move there. That’s kind of something Paul Tracy does.”

Moments later, Stewart and Francis were seen chuckling on pit road before the main event.

If fans were looking for a typical, “short track Saturday night,” these drivers certainly delivered. However, despite getting the win, Stewart is not too happy with the amount of damage caused in the event.

Labonte led the field to the green, but Biffle quickly took the lead, with Andretti scooting through to second. Following a restart for the SRX Fun Flag, Biffle and Andretti had a spirited battle for the lead, but Biffle eventually prevailed to win the first heat.

The inverted field saw Tracy start on pole, with Castroneves alongside him. Tracy rocketed to the lead, but Newman, who started the heat in sixth, made his way to second in just a few laps and hounded Tracy for the next several laps.  Castroneves retook second from Newman about halfway through the heat. Moments later, Castroneves went into turn 1 too hard and spun Tracy to bring out the caution. Castroneves then held off Andretti and Newman to win heat two.

Next up for the SRX series is a return to Stafford Speedway on July 2 at 8 p.m. ET.  Hometown hero Doug Coby is the 2021 winner of the event (the inaugural race for SRX), although he will not be competing this year.

Ernie Francis Jr should of punched Stewart.
Paul Tracy is everyone’s bitch.
When the cars are equal, just take the leader out if you want to pass.

Tony is showing no signs of maturing. I thought getting married might result in some changes in his temperament. I hope Leah is never on the receiving end of one of his tirades.