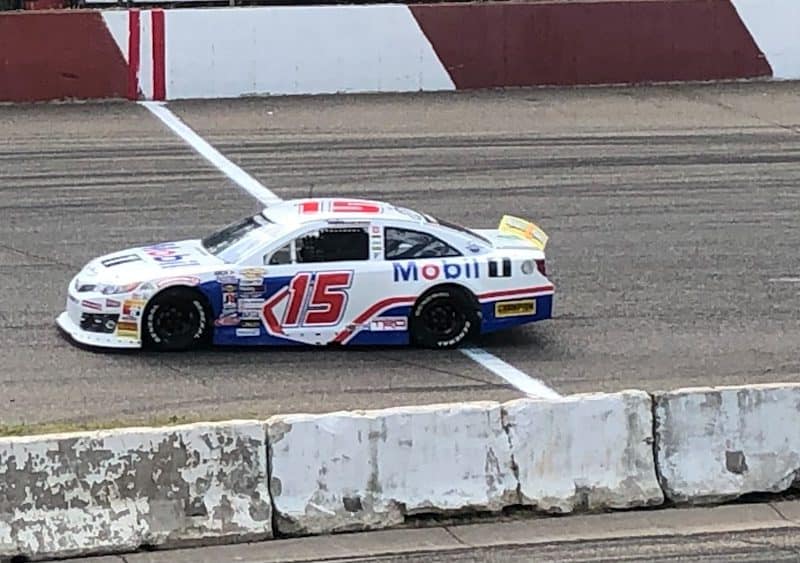 Elko New Market, Minn. – Entering his ARCA Menards Series debut at Elko Speedway on Saturday (June 25), the most noteworthy accomplishment on Landon Pembelton‘s racing resume was his victory in the 2021 NASCAR late model stock car race at Martinsville Speedway. After 250 laps in the Menards 250, Pembelton certainly impressed at the 0.375-mile short track.

Pembelton posted the third-fastest time during practice, then qualified third. Third is where the teenage newcomer raced for most of the 250-lap race.

Early in the race, Pembelton drove his No. 15 Venturini Motorsports Toyota ahead of Taylor Gray. Gray tried to pass underneath Pembelton, but to no avail.

For the final dash to the checkered flag, Pembelton and Dye battled for third place for a number of laps. Ultimately, when Sammy Smith won for the second straight time, Pembelton brought his No. 15 home to a third-place finish.

“Our car was fast,” Pembelton told Frontstretch post-race. “Our No. 15 Mobil 1 Toyota was quick tonight. I think we should’ve been one spot better there but always something to look forward to. My next race is Milwaukee Mile and I’m looking forward to it.”

“He didn’t win,” Venturini jokingly said. “He did a good job man. Honestly, for his first race, I thought that was a really solid night of restarts. And every time I bring a kid to their first one, they struggle. I don’t care who it’s been, they struggle on the first one. He did a solid job; he wasn’t strong in that area but he wasn’t weak.”

“We can be better,” Pembelton echoed.

Dye is one of the full-time competitors battling for the championship. Yet Dye and Pembelton raced cleanly for a number of laps. Dye ultimately finished fifth.

Pembelton has two more ARCA races on his slate this year. He’ll compete at the Milwaukee and then the season finale at Toledo Speedway. In addition, Pembelton will also compete in the ARCA Menards Series West season finale at Phoenix Raceway.

“We want to get a little bit more experience on the bigger [short] tracks,” he added. “I’ve got a lot of experience on the short tracks in late models. I think it’s something to look forward to from here on out.”

Pembelton earning a podium finish in his ARCA debut is impressive. But does it match his late model win at Martinsville?

“We need to be a hair bit better but this is right up there. Definitely, it’s up there with the Martinsville one. Definitely for the debut; I’m looking forward to the next opportunities that come out. It’s going to be a lot of fun.”