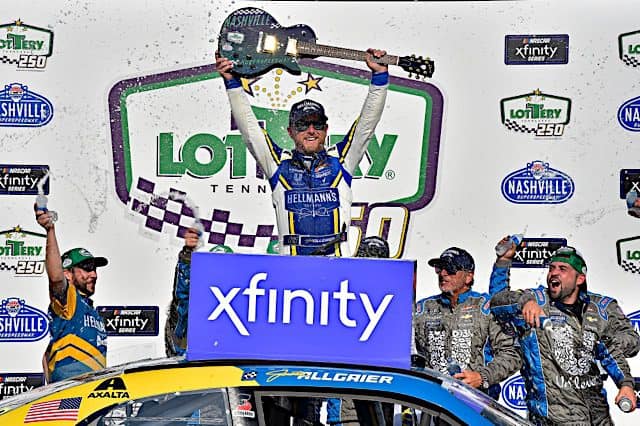 “It never gets old driving a racecar that good, I can assure you of that,” said the now two-time winner in the 2022 NASCAR Xfinity Series Justin Allgaier as he took the checkered flag at Nashville Superspeedway.

Trevor Bayne, Riley Herbst, Ty Gibbs and Sam Mayer rounded out the rest of the top five, but all crossed the finish line well behind Allgaier as he cruised to his 18th career Xfinity Series victory. Allgaier didn’t stop at just winning the Tennessee Lottery 250, though.

Allgaier was able to stake his claim to both of the previous stages in the race, earning playoff points galore for his efforts. With the playoff push rapidly approaching Allgaier now sits in third place, less than 10 points behind Gibbs for second place.

Enough about the basics, though — this is the Breakdown after all, so let’s do just that.

At this point, even I think it’s getting old to see JR Motorsports keep popping up in our winners section, but until somebody puts their foot down and stops them, I can’t warrant taking them out. Even after a two-week hiatus, they’ve made their return in a thunderous fashion, placing two cars inside the top five and sweeping all three stages. The JRM boys didn’t just provide some fanfare on the track this weekend, though.

Mullet Fans rejoice as Noah Gragson brought back his infamous (or famous, depending on how you look at it) mullet this weekend in hopes the luscious locks will carry him into the latter half of the season with a little momentum. Did it work, though? Somewhat. He came home 13th after having to dodge some traffic during the final stage. Overall, not a bad day at the office, but it could be better. He looked fly doing it though, and to some, maybe that’s all that matters.

When you have a race at 4 but have to jump 40 school buses on a dirt bike at 8. #NASCAR pic.twitter.com/n0Knmja8ar

As hot as it was at Nashville Superspeedway, I have to include every single driver in this week’s losers section. Sure, Allgaier got the win, but I promise you that if he could have turned the temperature down a few notches, he’d have still done it. Multiple drivers were taken to the infield care center post-race for heat-related issues and reports have surfaced that even fans were passing out due to the exposure.

Now, what can NASCAR do about it? Absolutely nothing that they don’t already do, in all honesty. Unless we’re talking about vortex theory here, they can’t control the weather. AJ Allmendinger sure looked like he wished he could, though, as he had to ice down his feet after he climbed out of the car post-race.

Allmendinger took off his shoes and put ice on his feet immediately after the race. He got up and was standing shortly afterward. pic.twitter.com/Y9aKYfkshs

Interestingly enough, we’re sticking with the theme, as Allmendinger earns the final spot on this week’s Losers list. Despite a front row start, Allmendinger brought his ride home in 16th. Now, was that due in part to the issue with his feet? It’s entirely possible – maybe even plausible – but either way, the current first-place points-holder realistically never wants to finish that low, no matter the temperature.

This was the first time this season that the Xfinity Series let me down when it comes to its paint schemes. Usually, even if not all of the schemes are good, there are at least one or two that are “out there” enough that they’re kind of cool. This week, that was not the case.

The best and most eye-catching that I could come to terms with this week was Bassett Racing’s No. 77 Chevy.

Before you are quick to judge and slow to look, yes, this is an old tweet. However, the Bassett Racing Twitter account isn’t the most active, and in all honesty, it just adds to their charm. This is a solid two-tone scheme with great logo placement and color differentiation. I would have never thought to put hunter’s-vest-orange on a racecar, but it works, and now I might just fire up NASCAR Thunder ’04 and do just that.

Allgaier’s victory doesn’t change the current playoff field that much, as it notched his second win on the season. Winners now include Allgaier, Allmendinger, Gibbs, Gragson, Brandon Jones, Josh Berry and Austin Hill according to Jayski.com. There’s still plenty of time left for fresh winners to be added to the fold, and with plenty of superspeedways and road courses ahead, I like the odds of that happening.

I touched on this a bit earlier, but it’s well worth circling back to. For those of you lovely, well-appreciated readers that don’t really know me, I’m a college student who spends his summers working as a boat mechanic. In short, I spend my days out underneath the same hot Tennessee sun the drivers did today.

With that being said, it is not for the faint of heart. It is grueling, with heat indexes upwards of 110 degrees on some days like today. That fact alone coupled with what is essentially cooking inside of a steel cage with wheels only makes it more and more grueling.

I say all of that to bring up this point: yes, there are plenty of night races on the NASCAR schedule, but when it comes to the safety of the drivers, would it not be smarter to have these races in the middle of the summer at night? NASCAR knows it’s in one of the hottest parts of the country, yet they still trot their drivers, their moneymakers out into the heat in full firesuits in the middle of the day.

If you don’t believe this is akin to cruel and unusual punishment in at least some fashion, I urge you to put on even a light jacket and pants, come live with me, stand outside all day, then see how great you feel. I’ll even let you take the guest room.

Just like Willie Nelson, the Xfinity Series is back on the road again, as it takes on Road America next week for the Henry 180. It will complete 45 laps of the historic track, as a new face looks to join the fold of winners and secure their spot in the playoffs. Like many others, last year’s winner of the Road America race was Kyle Busch. Now, with him out of the picture in this series at least, the door stands wide open.

That race will begin at 2:30 p.m. ET and will be aired on USA Network, the Motor Racing Network and the NBC Sports app.