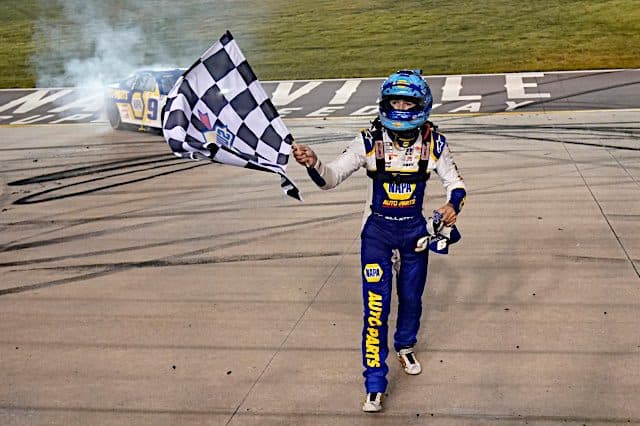 When his No. 9 Chevrolet came alive when the sun went down (after multiple rain delays pushed racing later and later into the evening), Elliott spent much of the final stage battling for the lead with Kyle Busch. A very late caution for Josh Bilicki‘s engine failure and divergent tire strategies among the frontrunners meant that Elliott had to hold off the other brother, Kurt Busch, to claim the checkered flag.

Speaking to NBC Sports after the race, Elliott described an up-and-down race in Nashville: “It was a long day, a fun day. Thank you [fans] so much for hanging out. Just so proud of our team. We have had a pretty rough month and month-and-a-half, so just nice to get going in the right direction. Getting a win is always huge, but to do it in a really cool city like Nashville is even better. Looking forward to that guitar.”

On the subject of the final restart, he said: “Ryan [Blaney] gave me a great shove and I appreciate him doing me a solid there in getting us out front.” Elliott’s final margin of victory was 0.551 seconds.

Confetti! Guitar! Checkered flag! @chaseelliott’s got it all in Victory Lane! pic.twitter.com/ZetIw4CdPZ

Polesitter Denny Hamlin was the first Toyota to take a turn up front, stretching out a lead early in stage one before the evening’s first lightning strike brought out a red flag just 41 laps in.

After the 30-minute wait was complete, Hendrick Motorsports saw a double disappointment as a broken steering rack for William Byron and a hard crash for Alex Bowman on consecutive laps took both Camaros out of the running.

The restart has not been kind to Team Hendrick.

William Byron heads to the garage and Alex Bowman spins and hits the wall hard.

Chase Briscoe and Ty Dillon were also victims of Nashville’s turn 2, crashing after contact with Ross Chastain on lap 62 and setting up a 25-lap shootout to the end of the stage between Joe Gibbs Racing teammates Hamlin and Martin Truex Jr.

As the lights came on, Truex seized the lead, but Hamlin ran him back down, putting his No. 11 right in the tire tracks of Truex’s No. 19 with five laps left in the stage. It took a flawless defensive drive from Truex to hold off Hamlin for his fourth stage win of 2022.

A caution for rain interrupted Truex and Ryan Blaney’s battle for the lead in stage two; after a brief delay, Denny Hamlin put them three-wide to take the top spot once again.

But another red flag for lightning, followed by a longer delay for rain, brought the action to a halt just 10 laps short of halfway.

Two hours and one network change later, the Ally 400 restarted with 150 laps to go, and Hamlin and Truex immediately resumed their dogfight. Truex once again came out on top to win stage two.

A slow stop for Hamlin after the stage promoted Kyle Busch to the front row on the restart, and the two-time champion used the position to full effect, sweeping past Truex on the bottom to take the lead. As Busch drove away from Truex, Elliott got past the No. 19 for second, and closed in on the leaders.

With 54 to go, Elliott took the lead, but immediately triggered Busch and Truex into green-flag stops.

🎶 You picked a fine time to leave me, loose wheel. 🎶

Chris Buescher loses a wheel, bringing out the yellow late at @NashvilleSuperS! #NASHCAR

A caution for a loose wheel on Chris Buescher’s No. 17 shook up the field mid-pack, but it was still Busch and Elliott up front until the caution for Bilicki upended everything.

Kyle Larson ended the night in fourth, and Ross Chastain added to his top-five tally by coming home fifth. Hamlin finished best of the JGR cars in sixth, with Austin Cindric in seventh scoring back-to-back top 10s for the first time in his Cup Series career. Christopher Bell, Joey Logano and Kevin Harvick rounded out the top 10.

The NASCAR Cup Series returns to Wisconsin’s Road America circuit next week for the Kwik Trip 250 presented by Jockey Made in America, airing 3 p.m. ET on USA.

Long race. 4th for Larson while Hamlin at 6th was the highest of the 3 really strong Gibbs cars. The last caution saved bubba from a 23 place finish and allowed him to finish 11th or near there. Results aren’t up yet. Sure nice to be rid of fox for the year.

NASCAR is going to kill any momentum they are gaining this season in attendance and ratings if they don’t change their idiotic start times. Does anyone seriously think when football season starts that people are going to sit through a seven hour broadcast that starts at 5:00 on a Sunday?

When the second delay hit, it sent me right to the Stanley Cup finals for good and I hardly ever watch hockey. Plus I have to get up and go to work on Monday mornings like pretty much their entire audience on the East Coast.

Who is NASCAR trying to please? It seems like with every decision NASCAR makes, the dedicated fan is always the last consideration.

It would sem that the Rain Gods are just as angry with Brian’s sycophants as they are with Brian.