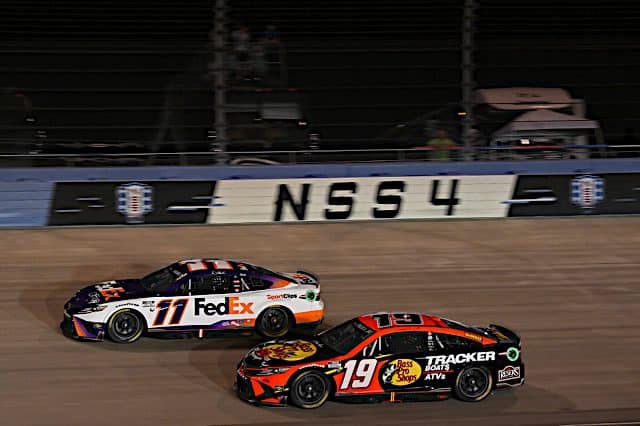 With inclement weather making the NASCAR Cup Series’ Ally 400 a long day on Sunday (June 26), Joe Gibbs Racing had fast Toyotas at Nashville Superspeedway. Yet a late-race caution split the field as far as pit strategy. When the checkered flag flew, none of the four JGR drivers finished inside the top five.

In fact, not only was the JGR quartet fast at the 1.333-mile track, they were dominant.

Joe Gibbs Racing led all but 50 laps in the race. Best finish for the team was Denny Hamlin in sixth.#NASCAR

But none of them took home the trophy.

How did such an astounding performance lead to less than indicative finishes?

It didn’t happen due to a problem early in the race.

On the contrary, all four JGR drivers were fast during practice and qualifying. Although Busch spun and made contact with the wall during his qualifying attempt, his team repaired his No. 18 and he was forced to start at the back of the field.

The repairs didn’t hamper its speed. When stage one ended at lap 90, Truex was the leader followed by Hamlin in second, Bell in fourth, and Busch in ninth place.

Yes, Bell’s incident with McLeod cost him a shot at points in stage two. His three teammates though ran 1-2-3, with Truex fending off Hamlin for the playoff point and Busch running in third place.

Busch and Hamlin both led during the final 100 laps of the race.

With less than 10 to go, Busch was close behind Elliott with Hamlin about a second behind the frontrunners.

The final caution split the field on strategy. With 27 drivers on the lead lap, Bell was the only JGR driver who chose to stay out, joining nine other competitors.

Busch and his team opted for code M&M’s, which meant two tires. The four-lap dash to the finish wasn’t enough time for Busch, Hamlin and Truex to contend for the victory.

Bell’s eighth-place finish has him 37 points above the playoff cut line with nine races to go in the regular season.

Busch finished 21st after getting shuffled back on the final restart. After ninth and third-place stage finishes, 21st clearly is a disappointment for Busch.

Despite earning two more playoff points and leading six times for 82 laps, Truex fell all the way back to 22nd place. Fortunately, his 35 points in this race keep him 73 points above the playoff cut line.

NBC broadcaster Dale Earnhardt Jr. talked about the importance of morale to a team. After having fast Toyotas, the JGR contingent didn’t leave the Music City on a high note. Instead, the organization will have to take solace in its speed, not results at Nashville Superspeedway.

I feel really bad for the three Toyotas that were stupid enough to pit for tires with four laps to go.

Yep, you would have thought Hamlin or Busch would have rolled the dice and stayed out since they already had wins.

TiminPayson
Reply to  Bill B

That’s exactly why they pitted. They weren’t going to win without trying something.