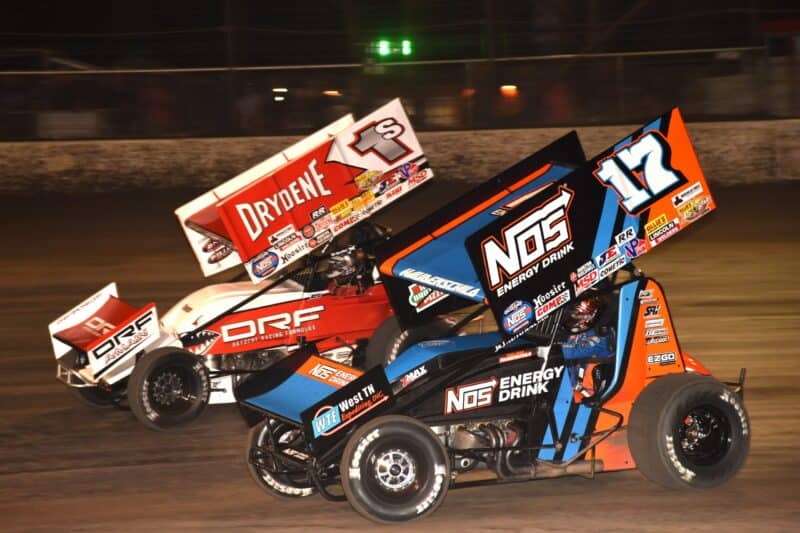 Sheldon Haudenschild executed one of the most dramatic passes sprint car racing has seen in recent memory Saturday night, pouncing on a battle for the lead between polesitter Carson Macedo and Buddy Kofoid. He then powered past Kofoid on the cushion exiting turn 2 on the white-flag lap to score a $100,000 win in the High Bank Nationals.

It’s the biggest victory of Haudenschild’s career as well as the largest paid out in sprint car racing so far in 2022.

The late-race fireworks saved what had been to that point a pedestrian feature. Extensive track work prior to the A-main left the Huset’s Speedway feature “juiced up,” with so much moisture put into the bottom that the opening 20 laps of the 40-lap event were all but a glorified hot lap session, with Macedo leading the entire way.

The race, and specifically the track, turned shortly after halfway when an extended red flag flew after Carson McCarl slapped the track access gate on the frontstretch wall, breaking the gate open from the wall.

With the track surface widening, Kofoid was able to run down Macedo inside of 10 laps to go, setting both up to be overtaken by Haudenschild for the race win.

It took until the last night of the High Bank Nationals for Sheldon Haudenschild to break into the win column, but even before scoring a six-figure payday the numbers pointed to Haudenschild as the sleeper of the event. One of only three drivers to score top 10s across the four nights of racing at Huset’s, Haudenschild further passed more cars than anyone in the field, going a whopping plus-34 in winning hard charger honors Thursday and Friday. And that pass on Saturday will go down in lore.

Carson Macedo was the second such driver to score four top-10 finishes this weekend, including an emotional win on Friday night that happened to coincide with the four-year anniversary of the death of sprint car racer Jason Johnson, the namesake of his No. 41 race team.

"I think I had a co-pilot there," – Carson Macedo said, after winning the Huset's High Bank Nationals prelim night in the Jason Johnson Racing No. 41.

A special night at Huset's:https://t.co/7HbEP7OPbg

Though Macedo will be disappointed in losing the lead in Saturday’s $100,000 feature late, his results over the weekend closed him to within 12 points of the series lead.

Though his feature win Wednesday technically wasn’t part of the High Bank Nationals (Wednesday night was a rescheduled feature from earlier in the month), Spencer Bayston’s victory in said feature came the day his CJB Motorsports team announced a new sponsorship deal with TrueTimber Camo. Debuts don’t get much better.

Defending series champion Brad Sweet left Huset’s with the series points lead and his 18-month streak of completing all laps in WoO features intact, but the High Bank Nationals were the most eventful event the Kasey Kahne Racing team has endured in recent memory. Sweet tore up multiple cars over the course of the week, including a nasty crash in Friday’s feature that saw Sweet exchange words with Rico Abreu under the red flag.

Brad Sweet looked to want to have a conversation with Rico Abreu. He got back to the car to get to the work area. pic.twitter.com/v14j9DDzDD

That Sweet’s crew managed to keep him on track despite the incidents was an accomplishment, but reality is leaving Huset’s four drivers are within 54 points of the series lead. Far cry from 2021.

Sweet wasn’t the only driver to endure a harsh wreck over the course of the High Bank Nationals. Both Noah Gass and Brooke Tatnell saw their machines utterly destroyed during Saturday’s racing program, though both drivers fortunately walked away.

He quickly climbed out and walked away under his own power. pic.twitter.com/t8I552T1rz

The wreck of the weekend though came Thursday night in the street stock support class. Matt Chaney went airborne in a wreck that pulverized his racecar and topped any crash a sprint car endured this week.

Logan Schuchart is the defending Jackson Nationals champion, the last WoO race to feature a “king of the hill” format as Saturday’s High Bank Nationals did. But a repeat was not to be. Schuchart suffered a flat tire early in Saturday’s feature while running in the top 10, then suffered further damage in dealing with Tatnell’s flip. He finished 20th.

David Gravel, who is sponsored by Huset’s Speedway, did make up 28 points on Brad Sweet in the WoO standings over the course of the High Bank Nationals, but that didn’t stop Huset’s from reaching out and biting its namesake driver more than once. Wednesday night saw Gravel wreck from the race lead trying to get by lapped traffic on the notoriously tight Huset’s surface. And while Gravel finish fourth in Saturday’s feature, it felt like a missed opportunity, as Gravel’s right-rear tire was damaged when the frontstretch gate broke loose from the wall and was struck by Gravel’s car.

I watch literally thousands of dirt races a year, so it takes a lot to make my jaw drop. Sheldon Haudenschild’s pass for the win Saturday made my jaw drop. I can only imagine that the track crew at Huset’s was breathing a sigh of relief for such an amazing finish, because watching how follow-the-leader the majority of the race was after their track rework, it really seems like they went too far with the moisture put into the track.

I still haven’t figured out what the terms of this “Whiskey Myers” promotion that has the band associated with the World of Outlaws’ signature four-wide pre-race display are, but what a mess of an idea. Replacing the iconic use of The Alan Parsons Project’s “Sirius” with a nondescript country rock song that couldn’t even be heard over Johnny Gibson’s emphatic command made absolutely no sense and frankly robbed pre-race of spectacle. And this is coming from someone that thinks the four-wide is completely overused.

Dear @WorldofOutlaws please don't permanently get rid of Sirius during Johnny's four-wide call. It's too iconic. Idc that it's now called the Whiskey Myers salute. Their stuff can be played afterwards. I speak for 99.9% of viewers.

It was announced Saturday night that the High Bank Nationals will return in 2023 for historic money, $250,000 to win and $5,000 to start across a four-night program. Assuming Eldora and Knoxville don’t respond in kind, the event will mark the richest purse ever offered in sprint car racing. Here’s hoping they have the suites rebuilt by then. Of course, they need to fix the front access gate first.

The rain fortunately held off Friday night, but the race program was at least initially expedited due to the threat of weather. Said the PA crew at Huset’s, you can understand why we’re jumpy with weather. Yes, Huset’s Speedway, yes we can.

On that note, that the track was able to get themselves back up and running as quickly as they did after being all but destroyed by severe weather was an accomplishment.

The race format used over the course of the High Bank Nationals was a victory on several fronts. First, the decision to make Saturday’s $100,000 feature not a points race was a stroke of genius, as it freed teams to take risks, which they did. Between David Gravel’s team opting to stay out and race on their damaged right-rear tire or Haudenschild’s banzai charge to the win, having no shackles to points racing was a big plus.

Second, while I was critical of the King of the Hill format used in the Jackson Nationals last year, said format worked really well at Huset’s. Huset’s proved to be a track-position sensitive track all week long. So while the King of the Hill, which was essentially a knockout bracket of time trials to set the first four rows of the field, meant that the normal dash and it’s side-by-side racing went out the window, it also meant that a random draw didn’t tilt starting positions towards being lucky. On a track this tough to pass on, the format did make sense.

49 – sprint cars that contested at least one night of the High Bank Nationals at Huset’s.

$1,000 – prize a lucky fan won that had Macedo listed in their High Bank Nationals souvenir program after he won the King of the Hill.

Where it Rated (on a scale of one to six cans with one a stinker and a six-pack an instant classic): We’ll give the weekend four and a half chilled Bud Lights. Sprint car racing needs every big-money payday it can get its hands on, and Haudenschild’s pass for the win Saturday will not be forgotten. That went a long way towards covering for Huset’s proving narrow and sensitive to track position on numerous evenings.

Up Next: Thinkin’ Dirty goes back on tour with the Lucas Oil Late Model Dirt Series on Independence Day weekend. The $30,000-to-win Freedom 60 from Muskingum County Speedway in Ohio runs Saturday night and will be streamed on MAVTV Plus.