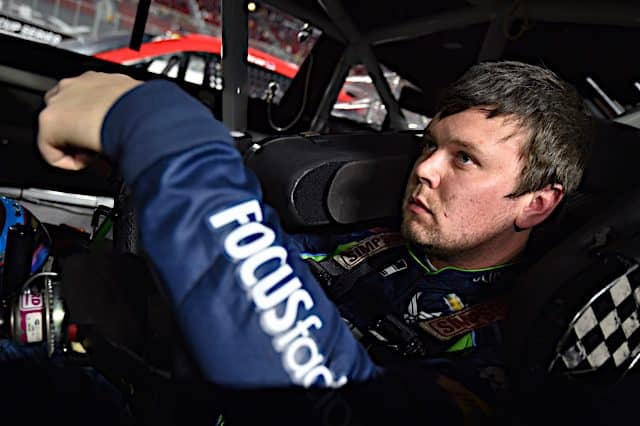 As NASCAR Cup Series drivers returned from a rare weekend off, they were treated to a long night at Nashville Superspeedway with multiple weather delays before ultimately running the race to completion.

Flat track racing has lined up well with Erik Jones’ talents, and Nashville was no different. The Petty GMS Motorsports driver came up one spot short of earning a top 10, settling for 11th.

The delay from the rain and lightning forced teams to be on their toes with the race turning into a night race rather than the hotter conditions they faced all weekend. Jones’ No. 43 FOCUSfactor Chevrolet did not respond in favor of the changing conditions, causing him to slide outside the top 20 in stage two.

When awards are given out at the end of the year, the No. 43 pit crew deserves one for the most versatility. Just a few weeks ago, a jammed lug nut cost Jones several laps and led to the team doing a full-out operation on the wheel. At Nashville, Jones had re-entered the top 15 in the final stage when Ryan Blaney spun with just under 100 laps remaining.

As Jones pitted, fuel from the car ignited a flame in the box. Not only did the flame persist in the box, but it also glowed on the right rear quarter panel of the car the whole lap around. The heat forced Jones to have to pit a second time to change the left rear tire.

These boys are tough as nails, but 🤞 for no more adventures 😅 https://t.co/CfmVcJk6HX

Soon afterward, Jones radioed in that he believed that he was experiencing steering box failure. There were also fears that the brake rotors were warped. Despite the chaos, he flirted with the top 15 until a caution with eight laps to go.

The No. 43 team opted to pit for four fresh tires, and a crazy restart mid-pack allowed Jones to pounce for an impressive 11th-place result.

Jones now has three finishes of 14th or better in the last four races. A win is likely needed to make the playoffs, as he sits in 20th in the playoff standings, 58 points back of Kevin Harvick.

Jones may have been the top underdog at the end, but it was Michael McDowell who had the most complete race. That has been a common theme over the past two months, as McDowell’s performance has earned him more television exposure recently. The 37-year-old earned a stage point in stage two and was once again battling with big names when it mattered most. At one point near the end, McDowell was the highest running Ford in seventh. Down the order was Hendrick Motorsports, Joe Gibbs Racing, and then the little engine that could of McDowell and Front Row Motorsports.

The No. 34 Love’s Travel Stops Ford was a constant top-15 presence all night, fighting with drivers like Harvick, Kyle Larson and Blaney for position. The last caution of the race forced crew chief Blake Harris to examine his hand from the eighth position. The team opted to pit for fresh tires, setting them up in 16th. McDowell gained three spots before the end to finish 13th. While it was not the top 10 he likely deserved, McDowell still has only finished outside the top 15 three times in the last nine races.

It was a big week for Ricky Stenhouse Jr. The 34-year-old signed a multi-year extension to remain at JTG Daugherty Racing, with whom he is in his third year. That was a particularly quiet silly season domino to fall, as many had questioned the future of the team. A year ago, Stenhouse got up as high as second in Nashville before finishing in sixth. The concrete tracks seem to sway in Stenhouse’s favor. However, it was not easy this go around. Stenhouse was in the top 20 most of the night but was not a top 10 threat like he was a year ago. The No. 47 Entenmann’s Chevrolet got as high as ninth when a yellow flew with less than 50 laps to go during green flag stops. The advantage of staying on the track allowed the Olive Branch, Miss. native to maximize his result, finishing in the 16th position, his best finish since the Coca-Cola 600.

Corey LaJoie had an eventful opening stage. On lap 50, LaJoie made contact with Alex Bowman, sending the No. 48 into the outside wall and ending Bowman’s race.

The restart has not been kind to Team Hendrick.

William Byron heads to the garage and Alex Bowman spins and hits the wall hard.

During one of the weather delays, Lajoie fed off of the situation.

I think we need to add a new shirt to the site. pic.twitter.com/8Q64kDHf5F

Despite the early drama, LaJoie recovered for a solid 20th-place showing. It was a much-needed result for LaJoie, who had finished 34th or worse in four of the five previous races due to issues mostly out of his control.

Jones’s Petty GMS teammate Ty Dillon was not as fortunate as the former. On lap 61, Chase Briscoe overdrove the corner and tagged Dillon’s No. 42 Black Rifle Coffee Company Chevrolet, sending both drivers into the outside wall.

A ride that @ChaseBriscoe_14 definitely did not want to take. pic.twitter.com/4cv4dgfK3f

The damage relegated Dillon to a 31st-place finish.

One driver from a lower division who deserves a shout out this weekend is Max Gutierrez. In the NASCAR Camping World Truck Series, AM Racing’s Austin Wayne Self opted to step out of the No. 22 at Nashville as his wife just welcomed a baby. In his place, the 19-year-old Gutierrez muscled out an eighth-place finish in just his second career Truck start. The result was also AM Racing’s best of the season thus far.

Erik Jones (11th): “We definitely had our ups and downs today, but nice to rebound and get an 11th-place finish. We fought the handling of our FOCUSfactor Chevy early in the race and I felt like we were making the right adjustments to have a good day before the rain delay. Once we restarted, after 10-15 laps, the handling would go away and it was just hard to drive. We’ll keep learning and working to get better. Overall, a good finish that we’ll take with us into next week at Road America.”

Ricky Stenhouse Jr (on his contract renewal): It’s been a good week, so far. Myself and everybody at JTG Daugherty Racing inked a new contract for me for a multi-year contract. That’s been something that we’ve been working on. I know that a few people have asked me over the last few weeks kind of where that was. But we had been working on that. I’m very thankful for Tad (Geschickter), Brad (Daugherty), Jodi (Geschickter), Gordon (Smith), everybody in the ownership group. And then obviously everybody in the race shop. We have so many people that don’t get to travel with us every weekend that put their heart and soul into this organization and I’m glad to be a part of it.”

While they may not be making the most noise on the track, the paint schemes certainly do at Live Fast Motorsports. The growing team broke out a black and green No. 78 Motorsports Games/NASCAR 21: Ignition Ford that brought some sweet heat to Nashville. Driver BJ McLeod piloted the mean machine to a 32nd-place finish.

Ridin’ it all night long here at @NashvilleSuperS 🌛 #NASHCAR pic.twitter.com/65TT0k3HNU