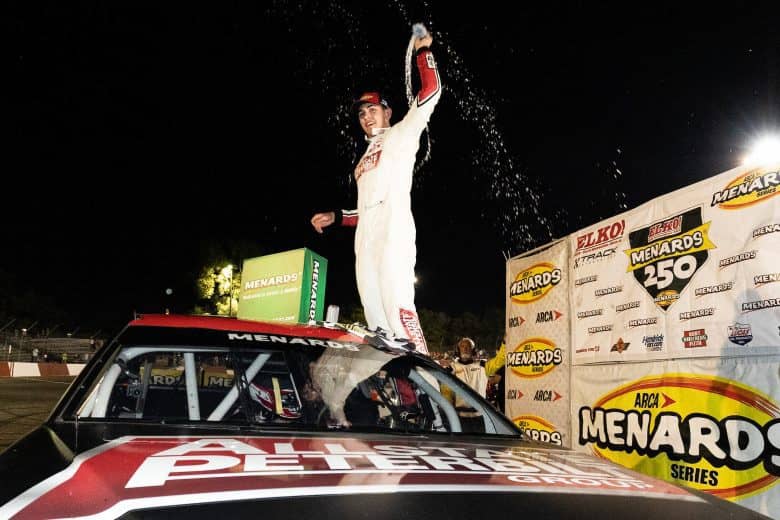 It’s better to be lucky than good. Why not be both on back-to-back Saturday nights? At Berlin Raceway, Sammy Smith was the lucky beneficiary of Daniel Dye’s No. 43 experiencing mechanical woes. Smith won there for his first ARCA Menards Series victory. Then at Elko Speedway, Smith was exceptionally good.

Rajah Caruth kept his points lead, now five points ahead of his Rev Racing teammate Nick Sanchez and nine points ahead of Dye. Toni Breidinger remains fourth in points and Greg Van Alst gained one spot to fifth place in the standings.

After three straight Saturday night races at three short tracks, how are the top five the power rankings faring?

Despite competing in only half the races this season, Smith has tied for the most wins and now has led the most laps, 384 compared to the second-highest, Dye with 224.

ICYMI:@sammysmithSS dominated the day at @elkospeedway. Leading both the practice and qualifying sessions, before leading the most laps in route to his second straight @ARCA_Racing win. Here is what he had to say post-race. #ARCA pic.twitter.com/IqN2zgOxVa

Smith has climbed to ninth in the championship standings, 171 points behind Caruth. With 12 races left this season, Smith would need to gain about more 15 points per race than his fellow ARCA championship contenders. While it is not impossible, it certainly is a daunting task for Smith. It will be interesting to see how he performs in the next three races at Mid-Ohio Sports Car Course, Pocono Raceway, and Lucas Oil Indianapolis Raceway Park, all of which are vastly different tracks.

Pre-race, Caruth told Frontstretch that his Rev team missed it in qualifying, leaving him with a 12th place starting spot. He added the team took a big swing to hopefully make his No. 6 faster. Caruth indeed gained five positions, finishing seventh, but two laps down. Still, Caruth only lost two points to Dye and gained four on Sanchez.

Sanchez had a tough time at the 0.375-mile short track. He started eighth, but misfortune struck when his No. 2 received damage due to a stack-up on a restart. The damage was detrimental to Sanchez’s race, as he really struggled for the rest of it. Adding salt to his wounded No. 2, Sanchez was spun by Willie Mullins, becoming the third driver Mullins spun in the race.

“It was the event [that restart] that got us in that situation,” Sanchez told Frontstretch post-race. “We had massive damage. Obviously, the hood, the whole front nose, we did have some suspension damage and that was the biggest thing. That’s why we were back there with the No. 12 [Mullins]. It takes a lot of damage to be back there with the No. 12. That situation was like the icing on the cake, really.”

“I love short track racing, but it also offers lots of opportunities for stuff to go wrong with tight quarter racing,” Sanchez continued. I think the road course [Mid-Ohio] will give me a good opportunity to make up the deficit. I think Mid-Ohio will be very good for us. I’m confident we’ll be back to Kansas and Talladega fashion. That’s the mindset I’m approaching Mid-Ohio with and want to go win that race.”

Sanchez won at both Talladega Superspeedway and Kansas Speedway. In the ARCA Mid-Ohio race last year, Sanchez both started and finished in fifth place.

After back-to-back DNFs due to mechanical issues, Dye finally finished an ARCA race. He finished fifth, the best of the top three championship contenders.

Dye ran third for most of the race, battling alongside Landon Pembelton.

Pembelton finally bested Dye to finish third, and Taylor Gray then passed Dye for fourth. But nevertheless, Dye had a fast No. 43 Chevrolet.

“Elko was another challenge for me tonight with our Martech Services Chevy,” Dye added in a team release. “We had a fast car but just struggled to find the balance we needed from early to late in the runs. I can’t thank everyone at GMS enough for their hard work today and to the Martech group for coming to the track and showing so much support.”

This ARCA season has eight races completed. Van Alst participated in eight ARCA events last year, too. He has tied his top fives — one — and bested his top 10 finishes from last year.

Now the key for Van Alst is to improve in qualifying. In all but the first two races this season, Van Alst has finished better than his starting spot. Yet his best starting position this year has been ninth, in back-to-back races, too. If Van Alst starts an ARCA race inside the top five, he will become an instant contender for his first-ever ARCA victory.

The ARCA drivers take one weekend off when they will celebrate the Fourth of July holiday. Then they make their first road course start this season at Mid-Ohio. The 42-lap race will take place on Friday, July 8 at 5 p.m. ET with TV coverage provided by FOX Sports 1.