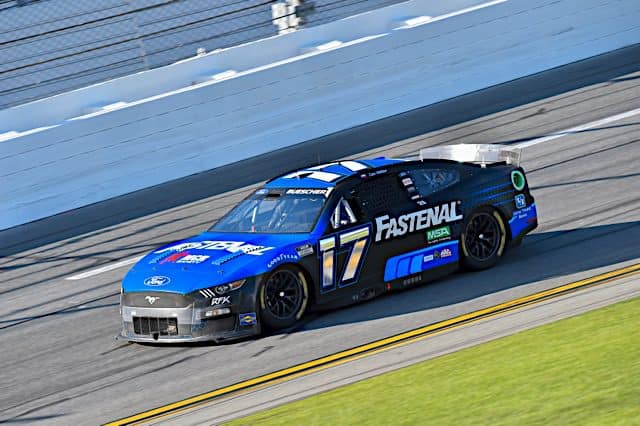 Chris Buescher will have to spend the next four weeks with a different crew chief after Scott Graves, the full-time crew chief for the No. 17 Ford in the NASCAR Cup Series, was suspended for a lost-wheel penalty issued by NASCAR in its weekly penalty report on June 28.

The infraction comes for an incident during last weekend’s Cup race at Nashville Superspeedway when Buescher’s right rear wheel came detached on lap 255.

🎶 You picked a fine time to leave me, loose wheel. 🎶

Chris Buescher loses a wheel, bringing out the yellow late at @NashvilleSuperS! #NASHCAR

In addition to Graves, jackman Matthew Wilps and rear tire changer Seth Gajdorus have been suspended for four Cup events.

This is the 12th lost-wheel penalty issued to a Cup Series team in 2022.

Buescher has earned one top-five and four top-10 race results throughout the first 16 Cup events he has competed in this season. The Texan did not compete at World Wide Technology Raceway at Gateway after being diagnosed with COVID-19.

No point deduction or monetary fine was given to the RFK Racing team following the penalty.

Also in the report were four NASCAR Xfinity Series teams whose crew chiefs were all fined $5,000 for unsecured lug nuts following last weekend’s event at Nashville.

For me there are two solutions to the wheel problem. One is to eliminate the studs like F1 (they can change 4 tires in under 3 seconds) so the wheel always ends up flush and any problem would be with the nut that holds the wheel. The other is to extend a stud so it protrudes through the wheel and can be seen by the changer. It would take a bit longer to line up but it would ensure a flush fit.

F1 tire changes are faster because there are tire changers at all 4 corners and they are already in position as the car pulls into the pit and stops. Plus there is no fuel added during an F1 pit stop.

All I’m saying is that they can mount the wheel without worrying about lining up studs. So if they don’t need studs why does the brain trust at NA$CAR think it is necessary?