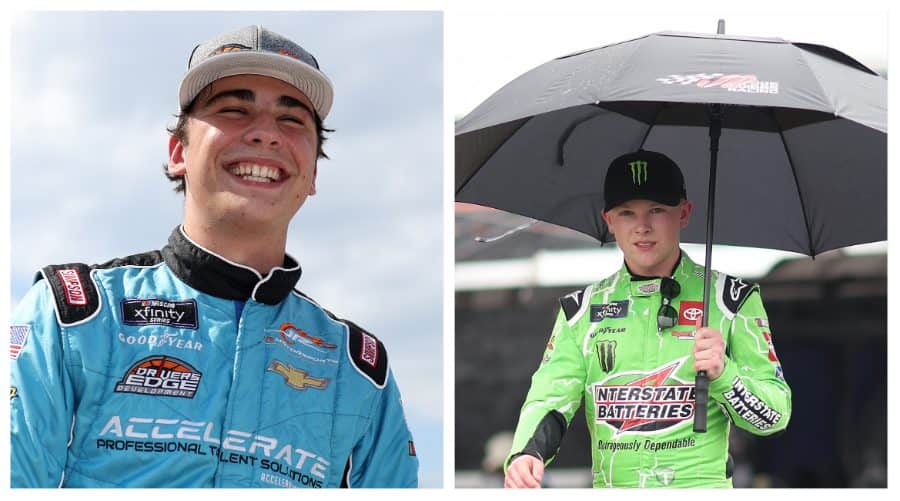 It’s a good week to be Sam Mayer.

The JR Motorsports NASCAR Xfinity Series driver is fresh off his 19th birthday, which he celebrated Sunday (June 26), the day after he finished fifth at Nashville Superspeedway. That made for his eighth top five in the last 10 races.

Now, the Xfinity Series heads to a special place for Mayer: home.

The series’ next takes Mayer and his competitors to Road America, the 4-mile road course in Elkhart Lake, Wis., located less than an hour from his hometown of Franklin, Wis.

Not only is it Mayer’s home NASCAR track, it’s also the location of his earliest vivid racing memory nine years ago.

“My dad (Scott Mayer) was racing the (NASCAR Grand-Am Rolex Sports Car Series) race up there,” Mayer told Frontstretch. “His teammate (Brendon Hartley) carried the team very well and carried them to their first win of the year and got to victory lane. And it’s very special because I was up there. Obviously, it was my first real memory with them because it was the first time I was at the track with them.”

So of course it would be special for Mayer to get his first career Xfinity Series win at the road course.

It maybe surprising, but Mayer, who signed with JR Motorsports to drive a Late Model at the age of 15, has championships in the ARCA Menards Series East and K&N Pro Series East and won in just his seventh NASCAR Camping World Truck Series start (Bristol Motor Speedway, 2020), hasn’t managed an Xfinity win yet.

Saturday’s visit to Road America will be his 34th start, the equivalent of one full season plus one race.

With his hot streak of top fives over the last two months, Mayer doesn’t seem too surprised he hasn’t taken an Xfinity checkered flag yet.

“Obviously, the racecar driver in me is gonna say, ‘Yeah, I want to go out there and win every single weekend.'” Mayer said. “That’s what everybody does. But you have to kind of put your expectations and everything in kind of a box and realize like what you have and what you can get out of it. And I think going into it, I didn’t have the experience level and the knowledge to go out there and just go and win races right out of the gate.”

Mayer’s Xfinity debut came a year ago this week, in race No. 16 at Pocono Raceway.

Mayer took over the No. 8 Chevrolet after it had spent the first half of the season with Josh Berry, an accomplished Late Model driver with previous Xfinity experience who is also more than a decade older than him.

Mayer wouldn’t finish in the top five until the season’s penultimate race at Martinsville Speedway.

It didn’t help there was next to no practice and qualifying last year due to the COVID-19 pandemic.

“That’s why last year was so tough for me, because I came up and out of nowhere, and it was kind of just like, throw you in with the wolves,” Mayer said. “You show up to these racetracks I’ve never been at before and never even seen and just go out there green flag racing. And that was the toughest part is learning these mile-and-a-half’s that I’ve never been to before. And expecting to go out there and finish in the top five and go win races is very difficult. But I had fun with it.”

He likely wasn’t having as much fun as another driver, one with an almost identical racing background to him, who Mayer has more or less been joined at the hip with in their rise to the Xfinity Series.

The 19-year-old grandson of Joe Gibbs, who Mayer has competed against across the ARCA, ARCA East and both K&N series, also arrived in Xfinity last year, albeit months earlier and to much quicker success. He’s won seven times in his first 33 starts.

“We’ve been coming up at the exact same rate, doing the exact same stuff,” Mayer said. “That’s kind of why I think that TV wants us to butt heads is because we’ve been doing it non-stop for the last four years now or so.”

See also
Eyes On Xfinity: Ty Gibbs vs. Sam Mayer is the Next Great Rivalry

Mayer and Gibbs have a history of on-track incidents, starting in ARCA and continuing into Xfinity last year.

Mayer claims to not even remember when their first run-in occurred.

“It’s been all it’s been just constant,” Mayer said. “Because TV and everything else keeps (saying) ‘Oh, this situation, this situation.’ It’s all become one big blob of just craziness.”

The craziness reached its boiling point in April during the final lap and post race at Martinsville. The two engaged in an altercation that resulted in cross words by both, a fine for Gibbs and more YouTube videos than you can shake a stick at.

“I expected him to be upset, because we were racing for $100,000, he was racing and I was racing for a win, if not a top three,” Mayer said. “We’re gonna do anything in our power to go out there and win. So whether that’s $100,000 or a trophy, we’re gonna definitely take advantage of it. But for us, and for me, I would say I didn’t expect it to escalate as much as it did.”

Even with all that’s happened between the two rising stars, Mayer claims his rivalry with Gibbs is “strictly business” and he doesn’t have any personal animosity toward him.

“There’s really no off-track relationship at all,” Mayer said. “That’s how it is with most drivers. […] But I’ve never had much of a relationship [with him] outside what TV and what the racetrack has built for us.

Does he view Gibbs as being someone who is willing to do that?

“We’re all racecar drivers trying to win do the best we can. And he’s had so much success already that he can kind of go out there and do whatever he wants. And he’s definitely, in my opinion, taken full advantage of it. But if I was in his shoes, I would do the exact same thing.”