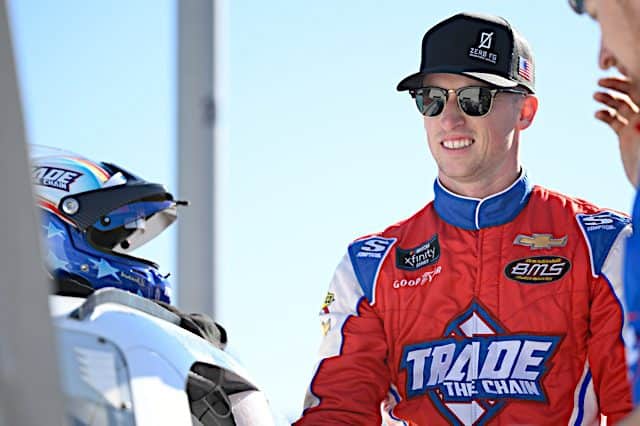 Compared to other NASCAR Xfinity Series midfield drivers, Brandon Brown is having a quiet 2022.

Having a quiet start may not be something to complain about following the unfortunate politicization of his first career victory at Talladega Superspeedway last fall and the controversy following a botched sponsorship announcement with LGB coin.

Undoubtedly, Brown would rather be standing in victory lane every few races, but riding 2022 out quietly isn’t the worst thing in the world. The past will resurface if and when he finds himself in victory lane again. That is just the unfortunate nature of politics. But political realities aside, would you believe Brown is on the best four-race streak since his first career win at Talladega?

Brown is riding a four-race streak of top-20 finishes, including the most recent two finishes being top 12s. He finished 15th at Texas Motor Speedway and 17th at Charlotte Motor Speedway. In the Xfinity Series’ first trip to Portland International Raceway, he finished 12th, and on Saturday (June 25) at Nashville Superspeedway, he placed 11th.


Compared to the four races before Texas, those results were worth stopping at a fancy Nashville steakhouse before driving back to the race shop.

Seven races into 2022, Brown was 12th in points, tied with Sheldon Creed, with the tiebreaker going to Creed. Brown had captured four top-13 finishes through the first seven races and was fresh off an eighth-place finish at Richmond Raceway, tying his career-best at the track.

But six days later, the race at Martinsville Speedway began a painful slide down the standings. Brown was flirting with the top 15 all race long at Martinsville but was involved in the massive pileup on lap 252. He finished 34th, which was his worst finish of the season to date.

The following week at Talladega, Brown was caught in another crash and finished 30th. The following week at Dover Motor Speedway, he spent most of the race outside the top 20 but finished 18th, a small victory after two weeks of heartache. But more heartache struck at Darlington Raceway, where Brown suffered engine troubles. He finished the race five laps down in 35th.

In four weeks, Brown went from effectively being one point out of the playoffs to 17th and 80 points below the cutoff line.

Since his run of top 20 finishes began at Texas, Brown has moved from 17th to 15th in points. And while he has only shaved six points off the margin between him and 12th place Ryan Sieg, he is only five points out of 13th. Four races ago, that gap was 58 points.

Why am I highlighting blocks of four races? At a glance, you’d think 2021 was the best season of Brown’s career, but 2020 is his best season to date. When Brown made the playoffs in 2020, he had seven four-race blocks where his average finish was 12th or better. In 2021, he only had two. And despite 2021 having more wins, top fives and top 10s than 2020, his average finish suffered due to his decreased productivity in top-15 and top-20 finishes.

To add insult to injury, finishes of 30th or worse more than doubled in 2021, going from four in 2020 to nine. Poor finishes like that aren’t going to help four-race microsegments of a season, nor will it help a driver’s hopes of making the playoffs.

But consider this: Despite this season not getting off to as good of a start compared to recent seasons — even 2019 was marginally better — Brown’s 2022 season is trending upward.

See also
Dropping the Hammer: Sam Mayer on Acclimating to Xfinity, 'Strictly Business' Rivalry With Ty Gibbs
An upward trend of improved finishes is leading to more points, and as mentioned above, while the gain on 12th place is small, his gains on 13th, the first position out of the playoffs, have been dramatic. While Brown has averaged a finish of 13.75 in the past four races, his direct midfield competitors have not fared as well. Among his competition, Jeb Burton has the best average finish at 15.25, followed by Brett Moffitt with a 17.5, Anthony Alfredo with a 24.0 and Creed with a 25.5.
More importantly, the 12th-place driver in the standings, Sieg, has averaged a finish of 23.0.

There are 11 races left in the Xfinity Series regular season, which is a lot of racing. If Brown continues his upswing in performance and his competitors around him continue to falter, he will be in a prime position to make the playoffs. If Sieg has a string of prolonged poor finishes, his 74-point lead over Brown and 69-point lead over 13th place Alfredo will drop to a dozen or so points in a matter of weeks. Should Brown continue his trend of averaging a top-15 finish, cutting into a fading Sieg will be no issue at all.

Six weeks ago, it was easy to write Brown off as a possible playoff driver, and the race for 12th would’ve come down between Sieg and the Our Motorsports drivers. With his surge in the past four races reminiscing 2020, Brown has crept back into the playoff conversation.