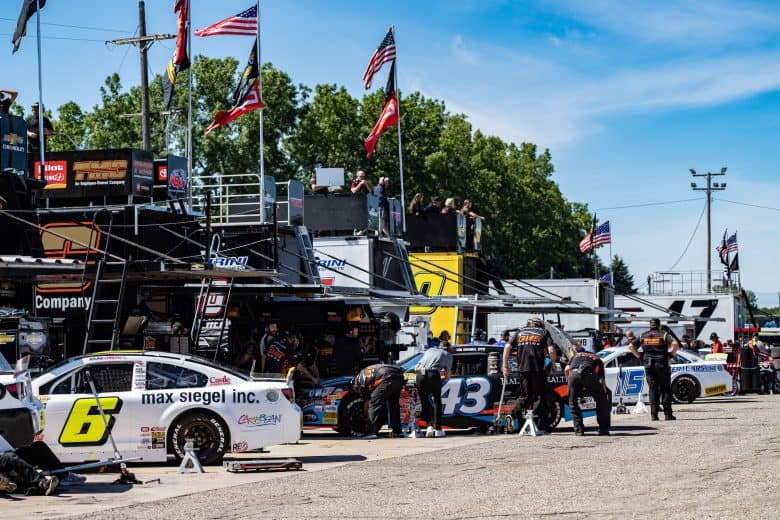 The 2021 ARCA Menards Series season had six winners, though only Ty Gibbs and Corey Heim won multiple times. Through eight races this season, there have been five different winners with three drivers having gone to victory lane twice.

To win an ARCA race, a driver must start inside the top 10.

The last time an ARCA-winning driver started outside the top 10 was the 2019 season finale at Kansas Speedway. Before that, it was Todd Gilliland driving from 15th to the win in the fourth race that season at Talladega Superspeedway.

This statistic is not a surprise among the frontrunners in the ARCA garage, however.

“That’s kind of what we expect this year,” Venturini Motorsports team co-owner Bill Venturini Sr. told Frontstretch. “The quantity isn’t as good as we would hope, but the quality is better than you can expect. Everyone is stepping up their game.”

“The equipment is very good in the top 10 teams. What the drivers do with it is another thing. Our cars are almost prepared identically. Look at Tom Hessert. He hasn’t raced in four years, and he qualified fifth [at Berlin Raceway]. But he’s only 15-hundredths of a second off the pole. That’s nothing! That gives you an idea of how tight the competition is.”

Venturini Motorsports has won 78 ARCA races, and its drivers, Heim and Jesse Love, have won a combined three poles this season.

Shannon Rursch is the crew chief for the No. 20, split between Heim and Love. Rursch is also not surprised the contending drivers start at the front.

“It’s tough,” Rursch said. “The cars that are fast are the ones that will win the race. You’ve got six or seven cars that can win a race.”

In ARCA competition, there are several different varieties for setting the starting lineup. At Daytona International Speedway, there is group qualifying, with the field split into four groups via random draw.

Yet other events have single-car qualifying. Those variations make a difference, Rursch said.

“In regular qualifying, you have extra time between practice and qualifying to prepare your car and make sure everything’s good. In the joint session, that qualifying lap takes time out of your practice time. Of course, there is a different mindset.”

Rursch has his own preference.

“I think that each driver should get their own lap,” Rursch said. “If something happens in practice and they throw a red flag, that takes up even more of your time. So, some of that is unpredictable, so I like having separate qualifying.”

The top three drivers in the points are Rajah Caruth, Nick Sanchez, and Daniel Dye, respectively.

Even though Rev Racing has Chevrolet support this year, Caruth has not spent any time in a simulator to acclimate himself to the tracks on the ARCA schedule. With 20 races at 19 different tracks, Caruth’s learning curve is steeper.

Fortunately, veteran Brad Parrott joined Rev to serve as Caruth’s crew chief. Before each on-track session, Caruth leans on Parrott for his knowledge.

“Just my experience what I’ve seen happen to the track during the race conditions,” Parrott said about their conversations. “We practice for about 30 minutes and put a quick qualifying change to the car then do our qualifying. I provide my experience on the track temperatures, the tires, just overall giving him [Caruth] as much feedback as he can take.”

Parrott has aptly adjusted to the different qualifying procedures for each race, adding it’s “not at all” stressful.

Of the top three, Sanchez is the most experienced with 30 ARCA starts and three wins, including two this year. His average starting position this year is 7.9, and he has yet to nab a pole in his ARCA career.

“Obviously, every race my goal is to get the pole,” Sanchez said. “We have the momentum to win the pole. At the end of the day, if you start in the top five, then you get good track position and you can maximize that. Starting on the pole or starting second, it doesn’t mean you’ll win the race.”

Sanchez is unfazed by the different qualifying procedures, as it does not affect his preparations for each race.

“It just gives you a little more time to work on your qualifying lap,” Sanchez said.

Regardless of qualifying, there are rules on what changes can be made to the ARCA cars before the race itself. However, like the qualifying procedures, those rules also vary by track.

“We will have a final adjustment period, but you are limited to what you can do,” Sanchez’s crew chief, Matt Bucher, said. “You can play with the wedge a little bit, trackbar, and shocks. You cannot completely wholesale a car after qualifying now.”

Per Rursch, after qualifying, teams can change spring rubbers, but they cannot jack the car up, they can change the grill tape and grill duct tape and can change air pressure on the current tires.

Before some ARCA races, teams are allowed to fully fuel their cars while other races teams cannot add fuel. All ARCA races have the drivers begin by driving on their tires from qualifying.

Dye has led the second-most laps in ARCA this year, more than Caruth and Sanchez. He too knows the contenders will be fast throughout a whole ARCA event, from when teams unload the cars from the haulers to the checkered flag to end it.

“At these short tracks, you see the winner come out of the top eight or sometimes the top five,” Dye said. “You have to keep making progress; keep getting better and not getting worse.”

Dye has his preference for qualifying procedures.

ARCA rewards its pole winner with an extra point. Caruth, Sanchez, and Dye are all single digits apart in the standings. Yes, qualifying matters.

“I am points racing this year, so I’m going to drive my hardest to win the pole,” Dye said.

Sanchez agreed, though he added winning will take care of the points situation. Caruth, meanwhile, has not led as many laps as his two counterparts, but he has been the model of consistency, with an average finish of 6.3 after an average starting spot of 11.1.

When the green flag waves to start a race, every driver wants to win. To be a contender though in ARCA competition, one must qualify well, especially inside the top 10. If not, good luck.