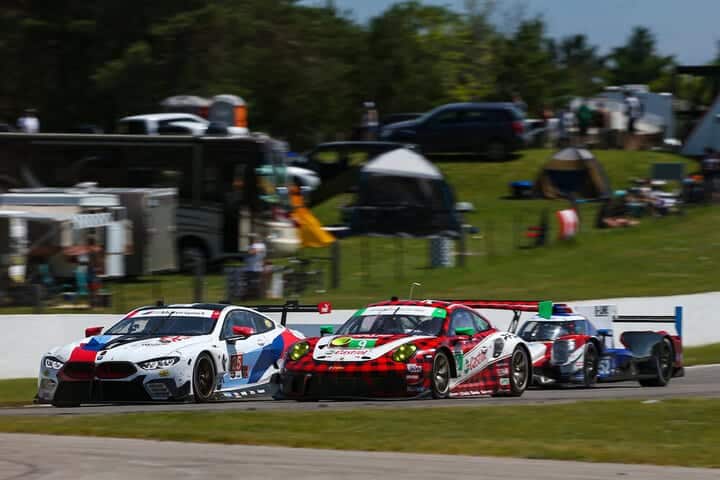 This weekend, the IMSA WeatherTech SportsCar Championship gets back underway after their six-hour race in Watkins Glen with a sprint race at Canadian Tire Motorsports Park near Bowmanville, Ont.  There will be 27 teams entered in the first Canadian round since 2019.

The DPi class has the regular six entries, four Cadillacs and two Acuras.  Action Express Racing’s No. 48 is not entered, although two of their drivers will be racing this weekend.  The points are extremely close at the moment.  Wayne Taylor Racing’s Filipe Albuquerque and Ricky Taylor hold a 17-point lead over Meyer Shank Racing with Curb-Agajanian’s Tom Blomqvist and Oliver Jarvis.  This is less than the difference between finishing first and second in a race.

The LMP2 class is not racing this weekend.  Their next race will be at Road America in August.

The LMP3 class has seven teams entered.  Kyle Marcelli is in the Andrew Wojteczko Autosport No. 13 alongside Orey Fidani.  He was entered last weekend as a late replacement for Kuno Wittmer, then didn’t get to drive because of the crashes.  AWA is continuing to run the No. 7 under the Forty7 Motorsports banner as well.

In GTD Pro, there are six teams entered.  At Vasser Sullivan, it was thought that Jack Hawksworth would be good to return after his motocross injury.  That is not the case.  Instead, Toyota GAZOO Racing factory racer Kamui Kobayashi will drive in Hawksworth’s place.

Kobayashi has very limited experience in GT3 cars, but does have some.  His most recent GT3 race was the Total 24 Hours of Spa in 2020 for HubAuto Corsa in a Ferrari 488 GT3.  He has never raced the Lexus RCF GT3.

At WeatherTech Racing, Daniel Juncadella will return to the No. 79 Mercedes alongside Cooper MacNeil.  He will replace the combination of Mikael Grenier and Maro Engel.

Finally, there are only eight cars entered in the GTD class this week.  This is because this weekend’s race is the second of two events this season that only count towards the WeatherTech Sprint Cup and not the full season standings.

That number might be reduced to seven if CarBahn Motorsports with Peregrine Racing cannot make repairs to their Lamborghini Huracan GT3 Evo in time.  Jeff Westphal crashed hard Sunday after running afoul of a battle between Fabio Scherer and Dylan Murry.  For now, the team is entered, but they have not released an update on their car.

Full-time teams that chose not to make the trip include Team Korthoff Motorsports, NTe Sport, Inception Racing and Hardpoint.  Rick Ware Racing’s Acura for Ryan Eversley and Aidan Read is back, though.

The overall entry is smaller than normal, but is larger than what was rumored.  Canada has far stricter requirements in regards to COVID-19 vaccinations than the United States does.  In May, SportsCar365.com reported that a number of teams were considering skipping the race due to the requirements.  This appears to have not come to pass.