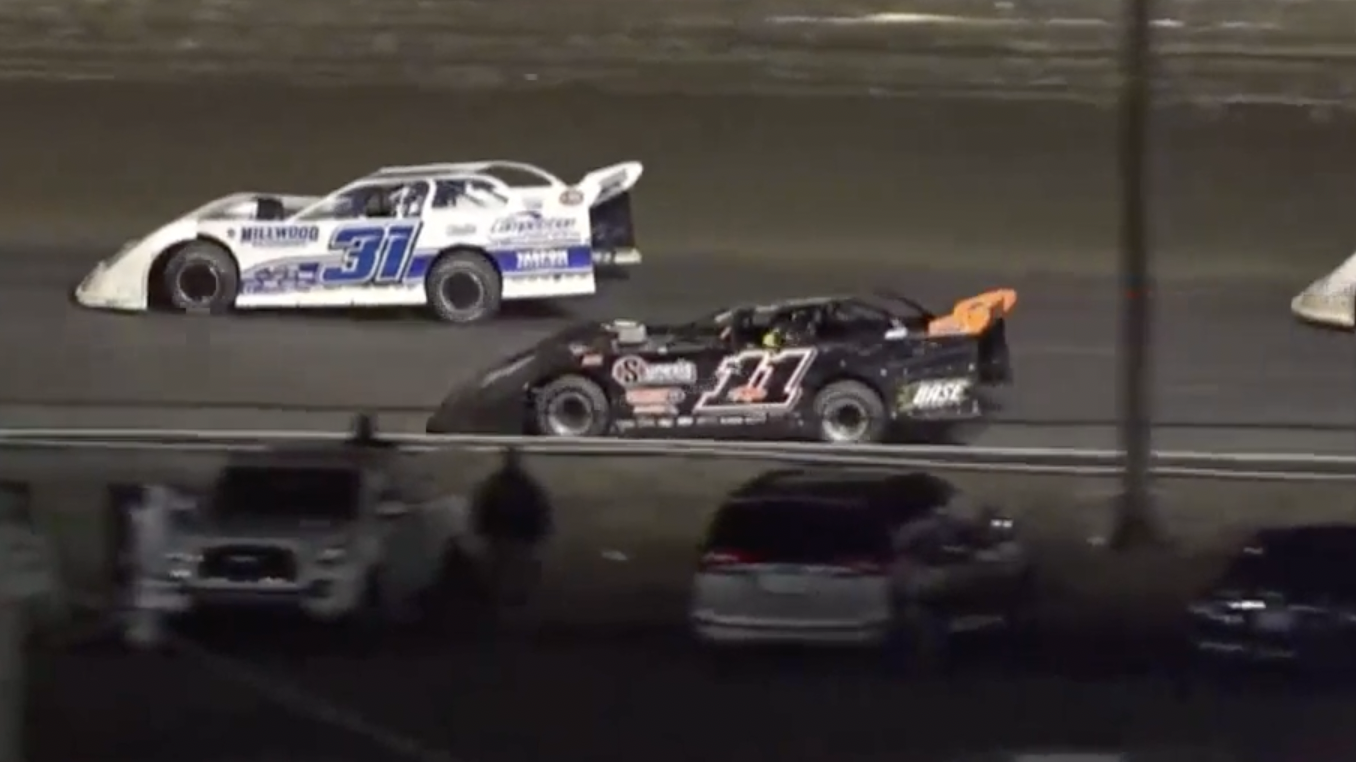 One year ago, Josh Rice prevailed late in the going to score his first career LOLMDS win at his home track of Florence Speedway in the Ralph Latham Memorial, a win he called a dream come true.

This Thursday night (June 30), he won again in entirety different fashion, charging from the drop of the green flag, making what would ultimately be the winning pass on lap 26 of the 60-lap feature and then driving off into the sunset, lapping all the way up to 10th place in the field.

Once Pearson dropped out of the race during a lap 28 caution period, Rice was never again challenged at the front of the field.

Despite 90-plus degree weather, the track prep crew at Florence was able to deliver a stellar racing surface that saw the middle portions of the race chock full of three-wide racing throughout the top 10.

In the points race, current series leader Brandon Sheppard snapped out of mini-slump with a fifth-place finish, allowing him to gain ground on current runner-up and defending champion Tim McCreadie, who finished ninth after riding a wave of momentum that saw him win the Firecracker 100 at Lernerville last weekend.

Take one look at the grandstands as Josh Rice took the checkers Thursday night. Saying the entire crowd was on their feet cheering was not an exaggeration. Rice is the very definition of a regional driver, and to take the regulars of the LOLMDS to school, even on his home track, is a real accomplishment. Rice will be a contender for the North/South 100 in August.

Defending LOLMDS rookie of the year Ricky Thornton Jr. finished second, but he won absolutely everything else Thursday night at Florence, taking fast time in qualifying and winning his heat race to start on the pole. What’s more, Thornton made news earlier in the week by scoring his first career win in a micro sprint at Circus City Speedway in Indiana.

Wanna say congrats to my buddy @RThornton20rt on the win in the MICRO tonight at Circus City! Cool to see him venture into the open wheel world more and more. Go get another one tomorrow night to get ready for the @lucasdirt series race at @FMSpeedway on Thursday!

Brandon Sheppard does not have a lot of experience at Florence Speedway, as it is not a track frequented by the World of Outlaws late model tour. For him to score a top-five finish and blunt Tim McCreadie’s momentum at this track was a real shot in the arm for the Rocket Chassis house team.

Ashton Winger went from 18th to eighth to win the hard charger award Thursday, and boy, did he look the part. Very racy.

Three-time Florence champion Robby Hensley turned heads with a heat race win and was holding his own in the top five during the feature before bringing out the yellow on lap 19 with a flat tire. He never recovered.

Earl Pearson Jr. continues to run well in 2022, but a return to victory lane remains elusive. After leading the first 25 laps of Thursday’s Ralph Latham Memorial feature, Pearson had to park his No. 46 car under a lap 28 caution after a rock went through his oil filter.

Thursday may have been the happiest day for late model fans in 2022. The announcement that MAVTV Plus is abandoning their oft-maligned platform to instead stream the LOLMDS races through Flo Racing is a huge boost to what is arguably the premier form of dirt racing in America.

What’s more, looking ahead this does mean that yes, fans will no longer have to change streaming platforms to watch the entirety of the 2023 Chili Bowl Nationals this coming January. This is a major get for Flo Racing, as now they hold the streaming rights to the direct competition of both the World of Outlaws sprint cars and late model tours.

The Chili Bowl crossover is officially a thing of the past.

Fans can now watch all week long including Saturday’s finale on a single platform. https://t.co/VKE5gj1Ci9

I will concede that I have some concerns for the future, as if something is too good to be true, it usually is. And the fact that Flo Racing in the last two years has acquired the Short Track Super Series, the Lucas Oil tour AND all NASCAR home tracks programming without raising subscription costs feels too good to be true. I sincerely hope the subscriber growth is there to make this work, because Flo Racing does a tremendous job. But the way they’re gobbling up the competition, Flo needs to be on firm financial ground.

The camera work during Thursday’s Ralph Latham Memorial feature was phenomenal. Simple, with minimal cuts between cameras and focusing where the racing was, not just the lead. MAVTV’s production trailer has been routinely criticized for using too many cameras and too many cuts during their telecasts, but their Flo Racing debut was A-game material.

Even besieged MAVTV was able to show debris on track when a debris caution was thrown during Thursday’s feature. How major motorsports networks that shall remain nameless can’t do this

One negative that I will comment on. Despite now being broadcast on Flo Racing, MAVTV’s coverage from Florence Speedway cut off as soon as victory lane interviews with the late model guys were done. Coverage of the support class modified feature was nowhere to be found. I sincerely hope Flo can put some pressure on MAVTV to actually cover entire racing programs rather than whatever gets squeezed in between late model competition.

@FloRacing @MAVTV Any particular reason why you couldn't go ahead and show the modified feature at Florence? I mean, you didn't even show the Quick 6. Great coverage for the @lucasdirt race.

Here’s hoping legendary James Essex gets utilized to cover more of Flo Racing’s late model properties on nights that the Lucas Oil tour isn’t competing. Listening to the veteran commentator utterly flummoxed about what a winged micro sprint racecar actually was, only to pick Ricky Thornton Jr. “in a late model” for his Ralph Latham Memorial prediction was the epitome of entertaining.

$99.99 – money MAVTV Plus subscribers that already have Flo Racing accounts will save courtesy of Thursday’s news.

Where it Rated (on a scale of one to six cans with one a stinker and a six-pack an instant classic): We’ll give the Ralph Latham Memorial five shots of Colonel Kwik-E-Mart’s Kentucky Bourbon. MAVTV did an excellent job with the late model telecast, the track surface allowed for some great side-by-side racing and the crowd left happy with a Josh Rice win. Extended track prep sessions and the rout the race turned into kept this one from six-pack territory.

Up Next: Thinkin’ Dirty stays on tour with the Lucas Oil Late Model Dirt Series on Independence Day weekend. The $30,000-to-win Freedom 60 from Muskingum County Speedway in Ohio runs Saturday night and will be streamed on Flo Racing.