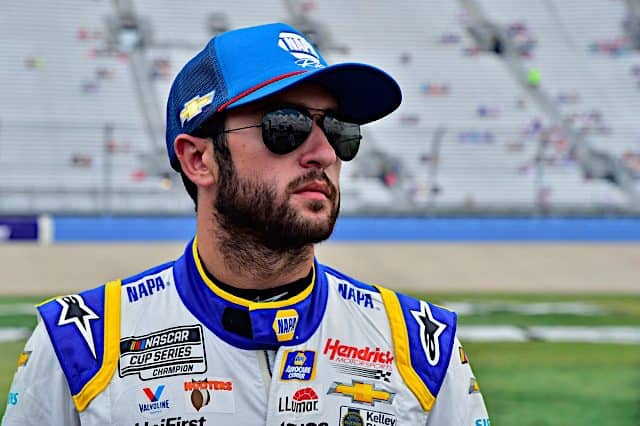 The Cup Series will make its third trek to the 4.048-mile Wisconsin racetrack, the sport’s top division returning to the road course last year for the first time since 1956. Drivers are starting to get more acclimated with the Next Gen chassis, as this marks its third road course event of the season.

Due to the race and track length (62 laps, 250 miles), there won’t be as many opportunities for drivers to lead laps and record their fastest laps. Earlier this year at Circuit of the Americas (a 3.41-mile track), only Ross Chastain posted more than 10 fastest laps (17), and just three drivers led 10 or more circuits.

That means you’ll need to focus on consistency: drivers who can dominate up front and either win or earn a top 10. Additionally, position differential on a road course like this one can really boost your DraftKings score. Last year’s winner, Chase Elliott, started way back in 34th and Kyle Busch wound up third after starting dead last.

Practice results may not help as much this weekend, since it takes over two minutes to get around the course. But be sure to check out qualifying, scheduled to run at 12:20 p.m. ET Saturday (July 2) on USA Network.

Before I share which drivers I’m considering for Road America, let’s check out the results from Nashville Superspeedway:

Most of the scores weren’t terrible, except for AJ Allmendinger, who started 14th and finished 19th at Nashville. If Kyle Busch had finished in the top 10, perhaps this lineup would’ve won something in the $0.25 tournament I entered.

The top score in the $6,000 Quarter Jukebox tournament was 360.05 and had Kyle Busch, Denny Hamlin, Kurt Busch, Austin Cindric, Bubba Wallace and Michael McDowell. It shows that even if your driver doesn’t finish well (on this type of track), as long as he leads laps and records fastest laps, you can still have a high fantasy score on DraftKings. Wallace had a frustrating race, for example, but that 12th-place result was still enough to contend.

Although Chase Elliott is known for his road course racing prowess, he hasn’t won a race on this track type this year. However, I’m still starting with him on top, as he’s the defending race winner. Elliott led 24 laps last year after starting 34th, a tremendous drive through the field for the Hendrick Motorsports wheelman.

This year, Elliott won’t have to fight that hard to get to the front; he starts from the pole. Plus, his career stats on road courses are hard to ignore. Elliott’s average finish of 7.7 is the best among active drivers. He won two Charlotte Motor Speedway ROVAL races in 2019 and 2020, as well as the 2020 Daytona International Speedway road course event. The Dawsonville, Georgia native also won at COTA last year and at Watkins Glen International in 2018-2019.

While Elliott’s two victories have come on concrete ovals this season, he still finished fourth at COTA and eighth at Sonoma Raceway — really solid results in the new Next Gen car. Look for him to contend once again at Road America.

Now, Chastain is one of the favorites heading into this weekend, but he’s above $10,000 on DraftKings (and deservedly so). That’s partly why I chose Ryan Blaney, as he’s less expensive. Blaney’s also done well on road courses, as his average finish of 12.2 is second best to Elliott.

Blaney’s lone win on a road course came in 2018 at the Charlotte ROVAL when the leaders spun out in the final chicane, allowing him to get by. Though that was four years ago, he’s still found a way to get good finishes on this track type. He’s earned top 10s in each of his last four road course races, including a pair of sixth-place finishes at COTA and Sonoma. And did you know he was in the top five fastest drivers late in a run at COTA?

Depending on how he looks in qualifying, Blaney should, at least initially, be on everyone’s radar for DraftKings.

Last year, Cindric encountered a mechanical issue and spun in the grass right after he took the lead on lap 24. This year he’s looking to bounce back from that and possibly earn another top 10 on a road course after finishing fifth at Sonoma and eighth at COTA.

The 2022 Daytona 500 champion performed well on road courses in the NASCAR Xfinity Series, too. Cindric won five such events, including in Elkhart Lake, Wisc. in 2020. He also won at Mid-Ohio Sports Car Course and Watkins Glen in 2019, as well as the Daytona road course in 2020.

If you think the Team Penske pilot can finish up front, feel free to place him in your lineup.

I couldn’t resist adding Daniel Suarez to my roster after he snagged his first Cup Series victory at Sonoma last month. He looked like a contender at COTA as well, at least for the first 15 laps, but ended up 24th after sliding back in the pack with pit problems.

Historically, the No. 99 Trackhouse Racing Team driver has finished several races better than where he started. Suarez was 16th at the Daytona road course after starting 35th last year, and 13th in the Charlotte ROVAL race after beginning 25th. Also, at WGI he earned two straight top fives in 2017 and 2018 for Joe Gibbs Racing.

Trackhouse should keep up its strong performance on road courses this weekend. Suarez is a far better value, though than his teammate Chastain.

See also
Stock Car Scoop: Will There Be 16 Winners in NASCAR's Regular Season?

McDowell has been on a hot streak as of late, with five top 10s in the past nine races. And he’s only finished worse than 18th once during that span.

One of these good results was a third-place at Sonoma, and that was no fluke. The No. 34 Ford driver was at the front all race long, and though he couldn’t quite get to the lead, the 2021 Daytona 500 winner was happy with a podium finish.

In the first road course event this year, McDowell qualified 27th and finished 13th at COTA — a good rebound that earned him 44 fantasy points on DraftKings. For some reason, he’s still less than $7,000 on this site; I would take advantage of it while you can, especially after a sixth-place qualifying effort.

Austin Dillon’s DraftKings salary feels way too low for him. I mean, yes, he’s only had one top 10 on a road course in his Cup career, but that came this season at COTA. Many of Dillon’s other results have been in the teens, too. For example, last year he was 11th after starting in the back at Road America.

Dillon was also 11th at Sonoma last month, one of his six finishes of 18th or better at the northern California racetrack.

And last year at Watkins Glen and the Charlotte ROVAL, Dillon was 15th. Average finishes may not be as good for him when he wants to make it into the playoffs, but it’s still good enough for us, as long as he doesn’t qualify up front.