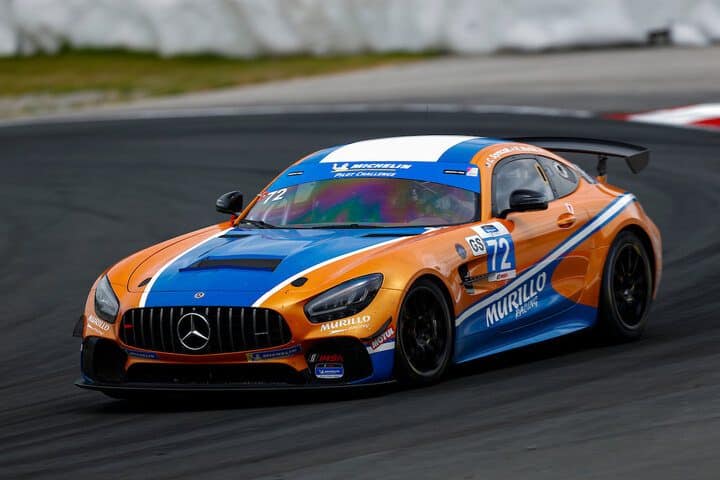 Murillo Racing’s Kenny Murillo put his Mercedes at the top of the chart early, then came back with a track record lap at 106.997 mph to win the pole Friday (July 1) for the IMSA Michelin Pilot Challenge Canadian Tire Motorsport Park 120.  It is Murillo’s first pole of the year and the third for Murillo Racing.  It is technically Murillo’s first career Pilot Challenge pole, but he started last November’s FOX Factory 120 at Michelin Raceway Road Atlanta from pole after the pole winners from KohR Motorsports withdrew after qualifying.

During the Grand Sport portion of qualifying, Murillo was the first driver to set a representative time, already at track record pace.  Teammate Marc Miller was right there on Murillo’s coattails.

Later in the 15-minute session, Riley Motorsports’ Damian Fineschi, 34, making his debut in the series, put down a strong lap in his Toyota GR Supra GT4 to put himself on pole.  The Argentinian racer who most recently competed in TC2000 was looking good for pole on debut, but Murillo came back with the fastest lap of the weekend for pole on his sixth lap at speed.

The session ended early due to a crash for Turner Motorsport’s Dillon Machavern.  As per IMSA’s rules, Machavern loses his two best laps for bringing out the red flag.

TeamTGM’s Hugh Plumb will start his Porsche in sixth, then Machavern.  Consistency worked in Machavern’s favor as losing his best two laps only dropped the No. 95 from fifth to seventh.  McCann Racing’s Michael McCann Jr. starts eighth, then the Ford Mustangs of PF Racing’s James Pesek and Sheena Monk.

In TCR, the run for pole came down to two drivers: JDC-Miller MotorSports’ Chris Miller and Bryan Herta Autosport’s Tyler Maxson.  The two drivers swapped fast times throughout the early part of the session before Maxson put down a lap at 104.988 mph.  This lap was enough for Maxson to take the pole.

For Maxson, this is his second pole of this year.  For the No. 77 team, it is their fourth as teammate Mason Filippi has two of his own, including last weekend at Watkins Glen.  Essentially, if the team has had their Elantra N TCR at the track this year, they’ve put it on the pole.

Maxson’s lap was good enough for eighth overall.  He ended up .118 seconds ahead of Chris Miller, followed by Parker Chase in the No. 98 Hyundai.  TWOth Autosport’s Travis Hill will start fourth in his Audi, while AJ Muss will start the No. 2 Hyundai in fifth.

Only 28 of the 33 cars set times in the session.  Hardpoint’s No. 22 Porsche and the No. 33 Bryan Herta Autosport Hyundai did not go out at all.  Normally, Robert Wickens qualifies the No. 33, but he wasn’t at the track all day Friday.  He had a very good excuse.

For those of you wondering why I wasn’t at the track today.. I would like everyone to meet Wesley Joseph Wickens. Born two weeks early but we could not be happier. Baby and Mom are doing great! I am so grateful to be married to such a strong woman! Let’s start the next chapter! pic.twitter.com/XY4ypAUdlG

The other three teams (CarBahn Motorsports with Peregrine Racing, TWOth Autosport’s No. 48 and Hyundai Racing Canada) did venture onto the track, but they did not set times.

The Canadian Tire Motorsport Park 120 is scheduled to go green at 4:10 p.m. ET Saturday.  The race will be streamed live on Peacock.