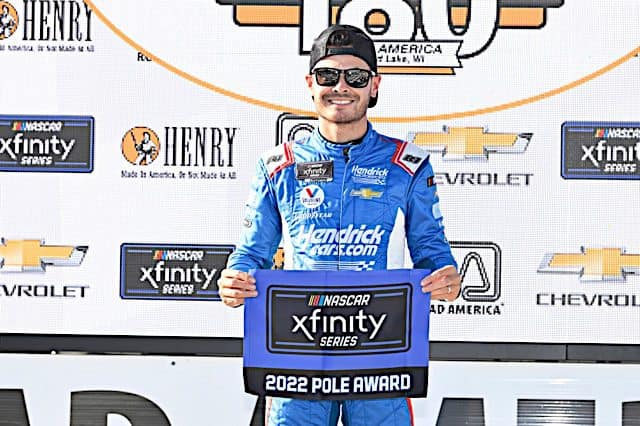 Kyle Larson secured the pole for the Henry 180 at Road America, the 16th race of the 2022 NASCAR Xfinity Series season.

Larson wheeled his No. 17 Hendrick Motorsports Chevrolet around the hilly 4.048-mile Wisconsin road course at a pole-winning speed of 108.495 mph. It’s the defending Cup Series champion’s fifth career NXS pole, in his first start in the series since 2018.

Ty Gibbs will start next to Larson in second place. Riley Herbst and Cole Custer make up the second row in third and fourth place, respectively, while Wisconsin native Sam Mayer will begin his home race in fifth place. Sheldon Creed qualified a solid sixth.

The only real major incident on Friday evening occurred in the closing moments of practice when Noah Gragson spun out in turn 10 and occurred some minor damage to his No. 9 Chevrolet’s rear end. Gragson recovered to make it into the final round of qualifying, in which he qualified seventh, just ahead of ARCA Menards Series regular Sammy Smith in eighth place. Tyler Reddick (ninth) and Austin Hill (10th) conclude the top ten starters in Saturday’s race.

AJ Allmendinger was unable to qualify due to a braking issue with his No. 16 Chevrolet. As a result, Allmendinger will start dead last (38th). Allmendinger already has two Xfinity wins this year and he also won the 2013 Xfinity race at Road America.

The No. 47 Chevrolet of Ryan Vargas, the No. 66 Toyota of J.J. Yeley, and the No. 92 Chevrolet of Dexter Bean did not qualify for the event.