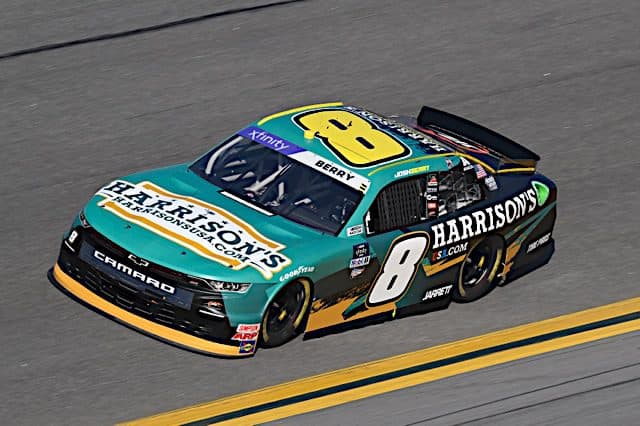 After years of speculation, the championship-winning NASCAR Xfinity Series team co-owned by two-time Daytona 500 winner and 15-time Cup most popular driver Dale Earnhardt Jr. is ready to make the jump to Cup — or at least “dip [its] toe in the water.”

Earnhardt fed the rumors earlier this week on the Dale Jr Download, but his sister, JRM co-owner and vice president Kelley Earnhardt Miller, all but confirmed them on SiriusXM NASCAR Radio, saying, “we’re thinking about it every day, working on it, it feels like every other day. We do want to go Cup racing.”

Said Earnhardt Miller, “I don’t think we’ll be Cup racing full time for 2023, that’s for certain. … unless something awesome falls from the sky … I don’t think there’s a lot of charters up for grabs at a reasonable cost right now.”

I’m mature enough to admit when I’m wrong. When NASCAR introduced the charter system in 2016, like many fans I mourned the loss of the ostensibly meritocratic top-35 rule. Instead, the 36 teams that owned charters would be locked into every race purely because they’d paid for the privilege.

After a couple years, the whole thing looked like a mistake. Richard Petty Motorsports and Richard Childress Racing downsized and charters ended up in the hands of non-competitive backmarker teams.

Just a few short years later the charter system has lived up to its promise, stabilizing the business of team ownership and attracting new owners to the sport. The result? The number of competitive full-time Cup teams is growing, and both the industry and the show are healthier for it.

The downside, at least for Earnhardt and JRM, is that, since a flood of new owners have already entered the sport, fewer and fewer charters are available at an affordable price. The cost to obtain one has likely gone up since last year, after Trackhouse Racing Team, 23XI Racing and Kaulig Racing all expanded to two full-time cars each at around $15 million a pop.

One additional problem: Rick Hendrick, owner of four-car Hendrick Motorsports, is a stakeholder in JRM, and the rules of the charter system prohibit him from owning a fifth charter. Assuming NASCAR won’t grant a waiver for JRM to enter the Cup Series, not only would the Earnhardts have to rustle up millions of dollars, they also would have to do so without the assistance of Hendrick. A difficult ask, considering that JRM’s Xfinity program already occasionally struggles for sponsorship.

I see two paths forward for JRM, given that the current holders of charters won’t let them go for anything remotely resembling a reasonable price.

Thirty-sixth and last in owner points of all chartered teams is the No. 78 of Live Fast Motorsports, a team founded in late 2020 by Matt Tifft and owner-driver BJ McLeod. While it has been common for wealthier organizations to buy out the charters of underfunded teams, the charter craze of the past several years has left LFM the sole remaining fully-chartered backmarker (Spire Motorsports and Rick Ware Racing have improved their performance in the Next Gen era, and neither is more likely to sell).

LFM’s charter is almost certainly the primary target for JRM, but the fact Earnhardt Miller was less than enthusiastic about JRM’s short-term charter hopes suggests McLeod is unwilling to sell at a price the Earnhardts can afford.

Well, why shouldn’t Earnhardt and McLeod, two of the most well-respected people in the garage area, team up? The Earnhardts could get themselves a Cup team by buying a stake in LFM. This would get around the requirement for Hendrick to divest; technically speaking, the Earnhardts’ buy-in would create an entirely new organization (call it Dirty Mo Racing, maybe), but one that could still take advantage of Earnhardt’s long association with Hendrick for full HMS technical support, given the new team’s inevitable switch to Chevy and No. 88.

Earnhardt and McLeod are no strangers to mutually beneficial arrangements: it was a number swap with McLeod’s Xfinity team that saw the No. 8 return to the Earnhardt family in 2019. Certainly, McLeod’s mid-pack Xfinity program could benefit from its owner having a close relationship with Hendrick and JRM.

McLeod might not want to step out of the LFM driver’s seat — both literally and metaphorically — but transforming his Cup team into a competitive operation and dropping down to run factory-supported Camaros for his own Xfinity team might be a deal too good to pass up.

The second option involves more moving parts and would likely be more expensive, but the current charter environment calls for gambles on the scale of Justin Marks buying Chip Ganassi Racing. JRM could buy a major stake in Spire’s two-car Cup operation, while Spire parent company Spire Sports + Entertainment could buy out Hendrick’s stake in JRM.

Spire’s Cup team is a bit of an anomaly. Spire Sports is a marketing company first and foremost, one that continues to represent rival drivers and teams even while running the Nos. 7 and 77 full time. Its rumored technical setup, where Corey LaJoie’s No. 7 benefits from a Hendrick engine program while the second car doesn’t get the same Hendrick tech, is also unusual. Right now, Spire is fighting with one hand tied behind its back, even as it expands into the NASCAR Camping World Truck Series with a few one-off races for HMS Cup drivers, Austin Hill and Chevy prospect Rajah Caruth.

A JRM-buys-Spire, Spire-buys-JRM deal would be a win-win-win for Spire, JRM and Hendrick. Spire would pick up Earnhardt, the most marketable client in NASCAR. JRM would get a two-car Cup team, and that team would get full Hendrick support on both cars, courtesy of JRM’s close ties with HMS. Spire would get easy options at every level of NASCAR to present to its clients, and HMS gets a consistent partner for driver development across all three series, incorporating Truck and Xfinity teams in addition to a two-car satellite operation in the Cup Series running, I’d imagine, LaJoie in No. 7 and an Earnhardt-backed full-timer in No. 88.

As for who drives this mythical No. 88 car, sponsorship aside, that all depends on if Kaulig puts Noah Gragson full time in its No. 16 next season. If Gragson is full time for Kaulig, I’d expect Earnhardt to tap his protege Josh Berry for the Cup ride in 2024.

In a nutshell, no.

Late-race caution calls will inevitably be controversial, especially in a case as borderline as this one, but it seems like all of NASCAR Twitter is up in arms, convinced that NASCAR is putting its thumb on the scale either to the benefit of Chase Elliott, or the benefit of Toyota, and is able to produce long lists of examples upon command.

Occam’s razor urges us to consider the simplest explanation, and in this case it’s that NASCAR is following the new policy it set forth after the complete disaster that was the final caution at Texas Motor Speedway’s All-Star Race earlier this year, when a caution for Ricky Stenhouse Jr. sent the race into overtime with leader Ryan Blaney mere feet from the finish line.

A great many fans on Twitter have latched onto the discrepancies between the officiating in Texas and Nashville. Bob Pockrass pointed this out on Twitter:

NASCAR didn't throw caution b/c Brad kept moving after contact with the wall, was obeying directions to get below apron & felt they could stay green … (Bob thoughts: Good call. No obvious debris. After Texas, my guess they don't want quick trigger near race end). https://t.co/rnOvtuMukw

But this is my question: do fans really want consistency with Texas? Or is it rather a good thing that NASCAR has learned from its embarrassing mistake?

NASCAR race control is a reactive entity. After the Texas fiasco, NASCAR vp of competition Scott Miller admitted that race control “put that caution out prematurely” in that case, and the sanctioning body would fix that mistake in the future.

But could it have been the response to Spencer Boyd and Erik Jones’ crashes at Las Vegas Motor Speedway in March that led NASCAR to be a little bit trigger happy in Texas in the first place?

I don’t envy race control. It is in the impossible position of having to keep drivers safe and satisfy everybody. That being said, with Texas fresh in everyone’s mind (regardless of the fact NASCAR promised after that race to do … essentially what they did in Nashville) and Brad Keselowski’s silly-looking bounce through the grass, it’s no surprise to me that people are asking questions.

Many people much smarter than I am have studied conspiracies and concluded that, generally speaking, secrets tend to come out. NASCAR isn’t conspiring to hold off cautions when fan-favorite drivers are winning. If it was, someone would have blown the whistle. I’ll always say I don’t think NASCAR decides whether or not to throw the caution exclusively based on who’s out front, otherwise Earnhardt would have won the Talladega Superspeedway playoff race in 2015.

However, ever since we got stage breaks, there seem to have been a lot fewer cautions for debris. If NASCAR has historically tended to throw cautions to improve the show (as it now does officially after stages one and two), the long list of receipts NASCAR Twitter is ready to provide would indicate it disadvantages every driver just about equally. Controversial caution calls are just a part of racing. More power to you if you think a particular one was unfair, but it doesn’t exactly keep me up at night.

Even if I choose to put my conspiracy hat on, Occam’s razor calls again: if you had been in the race control box for over seven hours and suddenly had a borderline call to make with four laps to go, wouldn’t you want to leave it green and go home?

In the last 5 years if a race was getting dull, any car that got loose or brushed the wall yielded an immediate caution. The inconsistency over time has made anything that Nascar does suspect in the eyes of some (including me). I believe their true desire is to, per Bill Sr, to not “sh*t up the show.” This will lead to inconsistencies which I have to learn how to accept or take my interests elsewhere. The default is away from purity of the sport and toward whatever is good for entertainment. They are no longer one in the same.

The charter system by design, and further enhanced by the horrible pay back to non-Chartered teams, is to protect and enrich the initial stakeholders. It benefits no one other than the original 36 holders…and Nascar who gains money with each transfer. When Nascar moved from ‘independent contractors’ as teams always were claimed to be, to a franchise system they have forced themselves into a corner. Some of the old guys are cashing out, but Roush and Petty did that years ago when they sold majority stakes off to financial entities. The new blood will help the sport, but at the expense of open competition. While it is hard for me to believe Denny Hamlin outsmarted anyone, he outsmarted the Earnhardts. I still believe a viable scenario is for them to buy into RCR which gives them the trademark #3 and #8. The #3 could then become a bargaining tool for use with the Wicked Witch of Kannapolis and get them a known starting point. With Hendrick and Childress engine shops merging at the demand of Chevrolet, a single development activity between HMS and RCR could actually emerge, as it does presently between JGR and 23XI.

Junior will decide if JRM goes to Cup! To Cup, or not to Cup?