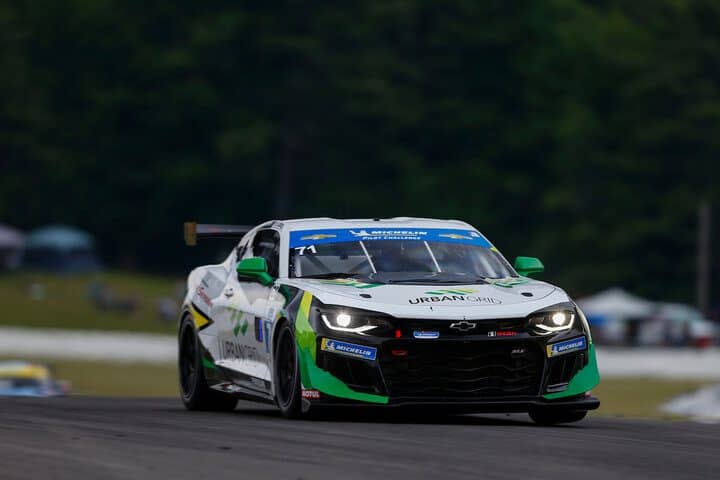 For IMSA Michelin Pilot Challenge teams Friday (July 1) at Canadian Tire Motorsport Park, the goal was to get out there and set a quick lap.  Rebel Rock Racing’s Robin Liddell turned in a lap at 106.938 mph nine minutes into the opening session.  That lap held up to be the fastest Pilot Challenge practice lap of the day.

In the morning practice session, the quickest times were all set in the opening 10 minutes of the session.  Spencer Pumpelly, Bill Auberlen and Eric Foss were all quick early in the session.  However, Liddell turned the fastest lap of the session on just his fifth lap at speed to top the session.  The lap was more than a half-second faster than the current Grand Sport track record.

Liddell’s lap was two-ninths of a second faster than points leader Trent Hindman in the VOLT Racing Aston Martin.  Foss ended up third in his Mercedes, then Pumpelly and CarBahn Motorsports with Peregrine Racing’s Tyler McQuarrie in the fastest Porsche.

Auberlen was sixth in his BMW, then TeamTGM teammates Owen Trinkler and Matt Plumb.  Christian Szymczak was ninth in the second Murillo Racing Mercedes, while Robby Foley was 10th in the second Turner BMW.

In TCR, JDC-Miller MotorSports’ Mikey Taylor was fastest in his Audi RS3 LMS with a lap at 104.941 mph, good for 14th overall.  Taylor’s lap was four-tenths of a second faster than TWOth Autosport’s Travis Hill in the No. 26 Audi.  Belgard & Techniseal Racing’s Denis Dupont made it an Audi sweep of the top three position.  Mark Wilkins had the fastest Hyundai in fourth, while Road Shagger Racing’s Jon Morley was fifth.

In the afternoon session, Liddell was once again very quick early in the session, topping the charts early on.  However, Szymczak was able to put down a lap at 106.756 mph 14 minutes into the session to put himself on top.  That time held up for the remaining 46 minutes to be quickest.

Szymczak’s lap was .058 seconds faster than Hindman, who set his best time in the final couple of minutes of the session.  Liddell was third, then Foley and Foss.

Dillon Machavern was sixth in the No. 95 BMW, then McQuarrie.  Things weren’t all that great in CarBahn Motorsports with Peregrine Racing paddock as Mark Siegel spun their Porsche late in the session in turn 4.  He was able to continue back to the pits.

In TCR, VGRT’s Karl Wittmer set the pace early on in his Honda Civic Type-R TCR.  However, Dupont put his Audi on top of the charts with a lap in the final 20 minutes of the session at 105.217 mph, good for 15th overall.

32 of the 33 cars on-site turned in laps during the session.  The sole holdout was the Hardpoint No. 22 of Nick Galante and Eric McAlister.

Qualifying for the Canadian Tire Motorsport Park 120 is scheduled for 5:10 p.m. ET Friday.  We will have a recap of the session after it finishes right here at Frontstretch.