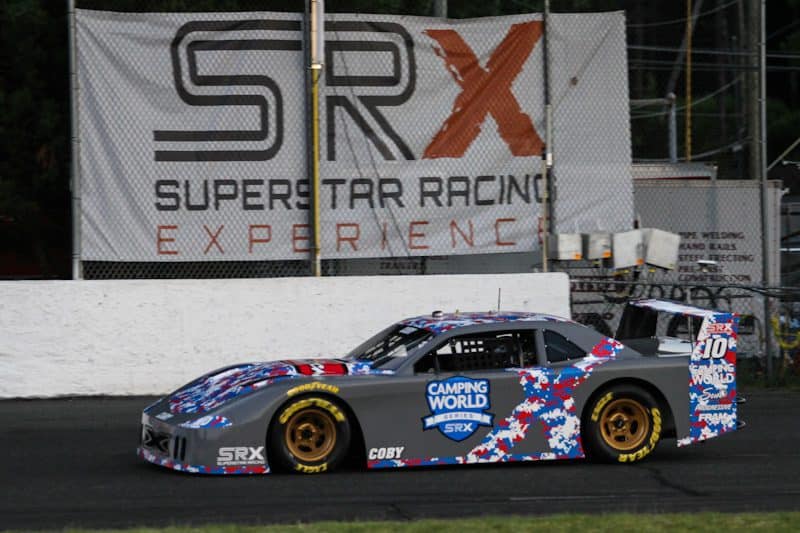 The first of two returning circuits this year in the Camping World SRX Series, Stafford Motor Speedway, could be the track with the longest history in the country, beginning life as a horse track in 1870.

Yes, this track was hosting events closer to the end of the Civil War (1865) than it was to the formation of the National League of Baseball (1876). Stafford would eventually host car races, and after being paved, became the premier track for modern modified racecars. This was the stomping grounds of the legendary Richie Evans and recognized names such as Pete Hamilton, Geoffrey Bodine, Greg Sacks, the real “Mr. Excitement” Jimmy Spencer, and Steve Parks built names for themselves around this half-mile racetrack.

With nine degrees of banking in the first two turns and only seven degrees in turns 3 and 4, each end of the racetrack is different. The SRX regulars last year found that out the hard way when Doug Coby became thus far the lone local ringer to win an SRX feature race. Coby knows this, his home track, like the back of his hand, and Coby’s six NASCAR Whelen Modified championships in the past 10 years are almost certain to lead to his name being added both to the previous paragraph and NASCAR Hall of Fame consideration in a couple of decades.

This race is scheduled to be Bill Elliott’s last in this series for this year. It’s unclear if this will be the final race in a long career for the 66-year-old legend out of Dawsonville, Georgia. If it is, it’ll be hard to top his experience last year at SRX, when the senior Elliott went head-to-head with the younger Elliott at the Nashville Fairgrounds.

There are a lot of great accolades in the career of this NASCAR Hall of Famer, but there are a couple that generally go unmentioned. When Konami decided to publish the first official NASCAR licensed video game, the sport’s most popular driver not only graced the cover, the name of the game itself was Bill Elliott’s NASCAR Challenge. While primitive by today’s standards, the game jumpstarted a tradition that continues today, with Chase Elliott appearing on the cover for both 2020’s NASCAR Heat 5 and 2021’s NASCAR 21: Ignition.

Personally, I don’t think Bill Elliott gets enough credit for helping rebuild the Wood Brothers Racing organization in 2009. When WBR downsized itself to a part-time team, it’s a well-told story now that Edsel Ford II took a personal interest in helping to rebuild the team. But Elliott coming aboard and providing both a solid hand and his guaranteed starts as a past champion helped stabilize the team after a very rocky 2007 and 2008. His humility in stepping aside for an unproven 19-year-old Trevor Bayne led to a now-legendary victory in the 2011 Daytona 500 for the organization, which today still fields competitive race cars in the NASCAR Cup Series.

Justin Marks is a very interesting figure. A sports car winner, Marks tried for years to make his mark on stock car oval racing, and for whatever reason, he just was not very good at it. That’s not to say Marks is a bad driver at all; plenty of fantastic race car drivers over the years just could not grasp oval racing.

Marks probably was not the best GT driver in his days in sports cars — that honor goes to Boris Said or Andy Lally in that era — but he was still pretty great when he wasn’t too focused on NASCAR. Any driver who can say they had just one class victory in the Rolex 24 Hours at Daytona is impressive, let alone a driver like Marks that had three of them.

Now, however, after his retirement from active driving in 2019, Marks has focused on building TrackHouse Racing Team, a team he co-owns with singer Pitbull. While Marks himself is not too exciting of a driver — he’d probably admit as much himself — the implications of his involvement in an SRX race are pretty massive.

Helio Castroneves, who Marks is subbing for this week, had a deal with SRX CEO Don Hawk that Hawk would help Castroneves get a ride in the 2023 Daytona 500 if Castroneves won a race in SRX this season, which he did in week one at Five Flags Speedway.

There are still some hiccups to get through if this is all potentially leading to Castroneves racing for Trackhouse in the Great American Race, namely the fact that the four-time Indianapolis 500 champion would be driving a Chevrolet while being contracted to Honda, but from the start of this story breaking, Trackhouse has been a frontrunner.

Trackhouse’s third part-time team, a program dubbed Project91, was announced in May and made a bang by signing Formula 1 legend Kimi Raikkonen to drive in the Cup race at Watkins Glen International in August. So not only does Trackhouse have a ready-made part-time car that is designed for brand new outside racing stars of Castroneves’ caliber, anybody paying attention to Cup this year knows how good that equipment is.

Even if this cameo plays no part in final negotiations, it wouldn’t be surprising if this move proves to be an icebreaker for what would probably be the biggest crossover in Cup since Al Unser Jr.’s Hendrick Motorsports entry in the 500 in 1993.

This week’s local ringer is “Big Money” Matt Hirschman, a former runner-up in the NASCAR Whelen Modified Tour standings. As his nickname indicates, Hirschman often seems to rise to the challenge when the lights get brighter and the purse gets heavier.

Preferring to stay in his region instead of spending money to go for a national championship, Hirschman usually isn’t seen at many racetracks outside of the tri-state area. But when he does, he’s at least going to be a headache for any of the frontrunners in that series.

A third-generation driver and the son of Cup champion Kyle Busch’s spotter Tony Hirschman, Matt Hirschman may not know Stafford quite as extensively as Coby. But he knew enough to be able to hold off Ryan Preece in the closing laps of this year’s edition of the Spring Sizzler back in April to earn this chance, and he should play a role near the end of Saturday’s (July 2) feature race.