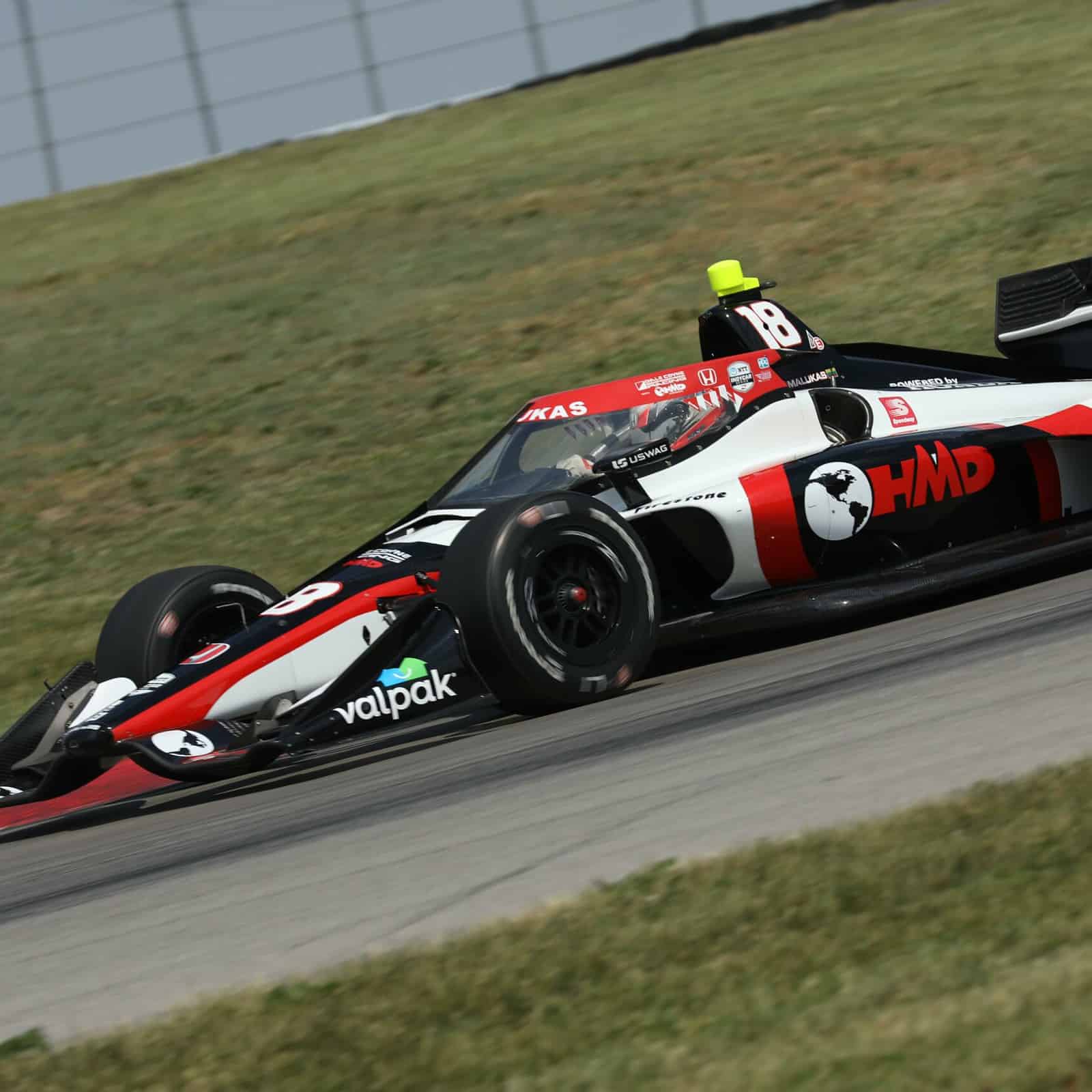 LEXINGTON, Ohio — David Malukas had one of the fastest cars at Mid-Ohio Sports Car Course during qualifying for Sunday’s (July 3) Honda Indy 200. The NTT IndyCar Series rookie, however, will start eighth after his second round elimination in Saturday’s (July 2) knockout qualifying.

As the second round of qualifying ended, Malukas drove the No. 18 Dale Coyne Racing with HMD Motorsports Honda behind eventual polesitter Pato O’Ward. O’Ward built a small gap to Simon Pagenaud in front of him, but Malukas did not do the same as time was running out and Kyle Kirkwood was only a few seconds behind the Chicago native.

If Malukas gaps O’Ward before starting his last lap, the possibility existed that race control would penalize Malukas for qualifying interference if he got in Kirkwood’s way. Instead, the 2021 Indy Lights championship runner-up kept his foot down, trying to stay near the No. 5 Arrow McLaren SP Chevrolet as the second round came to a close.

“At that point, there’s nothing I could really do because Kyle (Kirkwood) was right behind and (Pato) had a, I don’t know, four plus second gap in front of him,” Malukas told Frontstretch after qualifying ended. “So it was really unfortunate, but I mean, we’re going to go right now and I’m going to talk to the officials and try to get a bit more of an understanding on how these impediment rules work.”

Malukas’s fastest lap of 1 minute, 6.8201 seconds was .0246 seconds slower than Pagenaud, who was the final car to advance to the Firestone Fast Six. After being eighth and fourth in the two pre-qualifying practice sessions, Malukas was frustrated by not being in the Firestone Fast Six, but happy with how well his car worked.

“We’ve worked really hard with the car and we got it to where it needed to be,” Malukas told Frontstretch. “We tried some things for the first group, but going into qualifying (it) wasn’t really the right direction, so we kind of went back and made some other adjustments, and then the car was just so fast for that second segment there. I definitely should have been in Fast Six, I really wanted to prove what the car could do on re-runs because I knew it had a lot of pace there.”

In the final round of qualifying, O’Ward put his car on pole position with a fastest lap of 1 minute, 6.7054 seconds to average 121.861 mph. After winning his fifth pole position of his IndyCar career, O’Ward denied any wrongdoing at the end of round two.

“It’s not my problem,” O’Ward said. “I think he’s (Malukas) got to learn how to distance himself and learn that. I think he put himself in that position because the red tires were coming in on lap 3 and he was on my gearbox in lap 1. It’s like, what do you think, I’m going to let you by or something? I’m in my program, too.

“I was also surprised. I was like, why isn’t he backing away? But yeah, he did that to himself.”

Malukas has seven podiums in his junior open wheel formulae career at Mid-Ohio with five wins and two third place finishes. A win is possible as Scott Dixon (2019), Juan Pablo Montoya (1999) and Al Unser Jr. (1995) have all proved in the past by winning form that starting spot

“It would’ve been easier starting from the top six, but I don’t know,” Malukas said. “I mean, IndyCar, that’s what makes it so special. There’s always a chance from everywhere you start and [starting] in eighth, I think you still have a very good opportunity.”