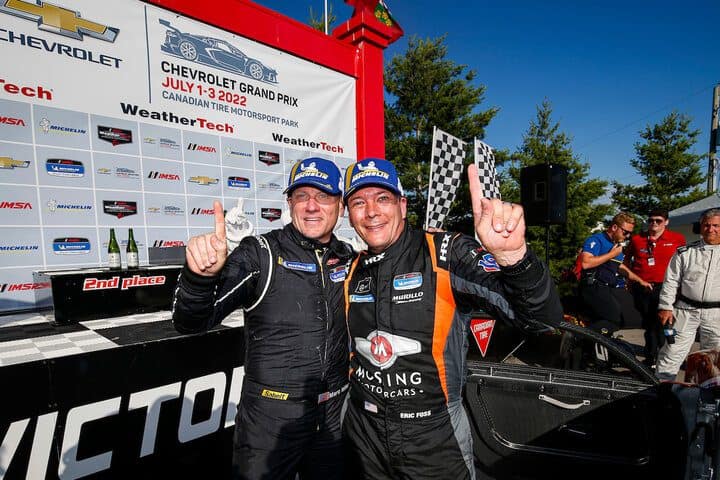 “I can’t say enough for this Murillo Racing team and Marc Miller,” Foss told NBC Sports’ Brian Till in victory lane.  “I’m just super happy and pumped to be up here.”

Neither driver is fully 100%.  Foss recently suffered a left foot injury and was unable to left foot brake last weekend in Watkins Glen.  Meanwhile, Miller is in final recovery after his Achilles injury last year.

Kenny Murillo started on the overall pole and was able to gap Riley Motorsports’ Damian Fineschi on the start.  Miller, who started third, was able to take the spot away partway through the lap.  Once in formation, the two Murillo Racing Mercedes pulled away from the pack while Fineschi held onto third.

The flow of the race was changed when TeamTGM’s Hugh Plumb pulled off in Moss Corner 20 minutes into the race with engine problems while running fourth.  This brought out the full course caution and led to a jumbled pit strategy.  Murillo and Miller stayed out, along with VOLT Racing’s Alan Brynjolfsson, PF Racing’s James Pesek and others.  Fineschi made a stop along with Sheena Monk, Vin Barletta and Sean Quinlan.

The teams that had no confidence that they could run the race on one stop were the teams that stopped here.  Everyone else chose to roll the dice on saving enough fuel during the yellow and running conservatively under green.

When the race restarted, Murillo led over Miller, Michael McCann Jr., Brynjolfsson and Tim Probert in the third Murillo Racing Mercedes.  Here, Murillo was able to maintain a small gap without issue until he approached the slower Porsche of CarBahn Motorsports with Peregrine Racing’s Mark Siegel.  That caused a stackup at Moss Corner, which allowed Miller to fall into the clutches of McCann.  McCann was able to get by Miller for second and held onto the advantage until he pitted to make way for Andrew Davis.

When the time for pit stops came after the halfway point, Miller pitted the No. 56 first to get Foss into the car, take four fresh tires and fill up with fuel.  Murillo stayed out for one extra lap before pitting to put Szymczak in the car.

Szymczak was able to get out in front of Foss, but Foss had the advantage of tires that were up to temperature.  He was able to sweep around Szymczak’s No. 72 on the outside of turn 2 to take the lead of those who had made their final stops.

Fineschi stayed out a couple of extra laps before he swapped over to Aaron Telitz.  Shortly after that, Foss was in the overall lead with Szymczak right behind.  The duo had a three-second lead on VOLT Racing’s Trent Hindman and things calmed down.

With a half-hour to go, Hyundai Canada Racing’s Bob Attrell pulled off exiting turn 1 with what appeared to be a broken front splitter and potential steering issues.  This brought out the second and final full course caution and packed everyone back up.

The fastest man on the track was not even in the top five overall at the time.  It was Rebel Rock Racing’s Robin Liddell, who had been running sixth, 10 seconds behind.  The yellow gave him an opportunity to contend.

The last 20 minutes of the race saw Foss and Szymczak run nose-to-tail with Szymczak not really making a move on Foss knowing that Hindman, who leads the points with Brynjolfsson, was right there, waiting to pounce.

With three minutes to go, Szymczak got a run on Foss on the Mario Andretti Straightaway.  Foss moved to the inside to force Szymczak to take the long way around turn 8.  It was ultimately just enough for him to hold on to take the win.

The final margin of victory was .338 seconds over Szymczak and Murillo.  Hindman and Brynjolfsson were third and lost some of their points lead to Foss.  Liddell and Frank DePew ended up fourth in their Camaro, while Fineschi and Telitz were fifth.

Pesek and Chad McCumbee finished sixth, then BGB Motorsports’ Thomas Collingwood and Spencer Pumpelly in seventh, best of the Porsches.  The sole Turner Motorsport BMW for Barletta and Robby Foley were eighth (the No. 95 crashed in qualifying and was unable to start), while Monk and Marcelli were ninth.  Stephen Cameron Racing’s Quinlan and Greg Liefooghe rounded out the top 10.

In TCR, Bryan Herta Autosport’s Tyler Maxson started from the pole and led early in his Hyundai.  However, JDC-Miller MotorSports’ Chris Miller was able to slip into the class lead when Maxson was distracted by Siegel.  Further back, Robert Wickens was the man on the move.  Wickens spent Friday becoming a father for the first time.  He showed up with no track time, started last and moved up in a hurry.

Unlike the Grand Sport class, nearly all the TCR teams chose to pit.  The sole exception was VGRT’s Victor Gonzalez Jr., who took the lead by staying out.  Miller quickly retook the lead after the restart, but Gonzalez was able to hold his own, settling in fifth position.  Meanwhile, Wickens moved up into the top three.

Behind Miller, TWOth Autosport’s Travis Hill was likely the biggest surprise of the day, putting his Audi up to second and taking the fight to Miller for the class lead.  Once Miller made a pit stop in order to hand over to Mikey Taylor, Hill ended up in the class lead.  He stayed out long enough to actually take the overall lead on the track before his stop.  That is where everything went bad as TWOth Autosport had a terrible stop.  Ultimately, Hill and Eddie Killeen ended up 11th in class in their home race.

Following the green-flag stops, Mason Filippi ended up in the class lead in the No. 77 with Mark Wilkins giving chase.  It was shaping up to be a BHA 1-2-3-4 prior to the final caution.

On the restart, Filippi got extremely loose in turn 1 and went wide.  This allowed Wilkins to take the class lead.  Filippi ended up fading all the way back to eighth and was unable to make up any ground prior to the end of the race.

A couple of laps after the restart, Harry Gottsacker and Taylor were battling for third when contact was made in turn 10.  While Gottsacker got loose, Taylor slid off-course and nosed into the tires.  No penalties were issued for the incident.  Taylor was able to back out of the tires, but his Audi had significant left front damage.  After the car was uncontrollable during the short drive down the pit straight, Taylor pulled off and retired.  No yellow was thrown.

Over the last couple of laps, Wilkins had a tough battle for the lead with teammate Michael Lewis.  Lewis tried all he could, but could not get alongside his teammate as Wilkins and Wickens claimed their second straight victory.

The margin of victory was .522 seconds over Lewis and Taylor Hagler.  This performance was good enough for Lewis and Hagler to regain the points lead that they lost at Watkins Glen.

Michelin Pilot Challenge teams will take a week off before traveling to Lime Rock Park for the Lime Rock Park 120 on July 16.  The race is scheduled to go green at 11 a.m. ET and will be streamed live on Peacock.  Frontstretch will be on-site to bring you all the action.