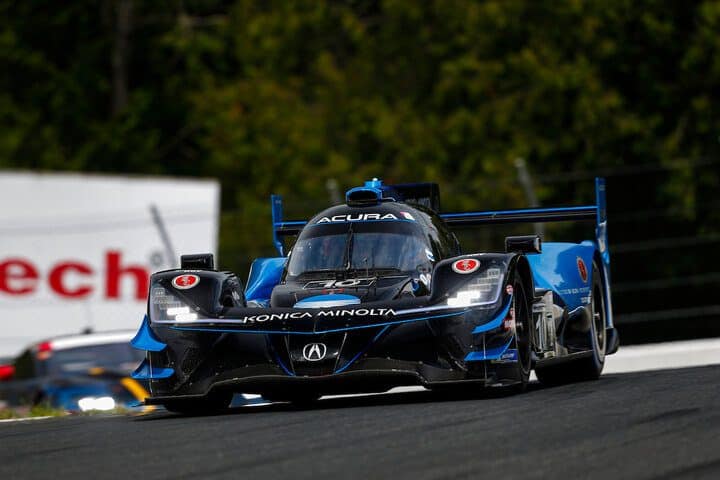 Wayne Taylor Racing’s Ricky Taylor was fastest overall in IMSA WeatherTech SportsCar Championship practice Saturday morning (July 2) at Canadian Tire Motorsport Park with a lap at 136.361 mph.  With the track being freshly repaved, the lap is an unofficial track record, more than a half-second faster than Colin Braun‘s record lap from 2019.

Friday’s first practice session was the first time for WeatherTech teams on the 2.459-mile road course since before the COVID-19 pandemic (the 2020 and 2021 races ended up being cancelled).  With new pavement since the last visit, teams adjusted and the times came down.

Meyer Shank Racing with Curb-Agajanian’s Tom Blomqvist turned in a lap at 134.715 mph 43 minutes into the session to put himself on top.  That time held up.  In the closing minutes, Chip Ganassi Racing’s Sebastien Bourdais was able to equal that time to the thousandth of a second.  A rare scenario, indeed.  Blomqvist is credited with the fastest time in the session only because he set the lap first.

In LMP3, Jr III Racing’s Garret Grist was quickest with a lap at 122.533 mph, seventh overall.  Grist’s lap was four-hundredths of a second faster than Braun.  Riley Motorsports’ Scott Andrews was third fastest in the session, but things weren’t all great for him.  54 minutes into the session, Andrews spun off at Moss Corner and brought out the session’s only red flag.  He did not return for the remainder of the session.

In the GT3 ranks, things were extremely close…except at the very front.  WeatherTech Racing’s Daniel Juncadella was fastest in GTD Pro with a lap at 115.687 mph.  The lap was nearly four-tenths of a second faster than the Porsche of Pfaff Motorsports’ Mathieu Jaminet.  The Heart of Racing’s Alex Riberas was third, then Corvette Racing’s Antonio Garcia and BMW M Team RLL’s John Edwards.

GTD was led by Vasser Sullivan’s Frankie Montecalvo with a lap at 115.075 mph, third of all GT cars.  He was .122 seconds faster than Turner Motorsport’s Robby Foley, followed by Winward Racing’s Russell Ward, Paul Miller Racing’s Bryan Sellers and The Heart of Racing’ Roman DeAngelis.  From Jaminet to the back of the grid was only six-tenths of a second.

WeatherTech teams were on-track bright and early Saturday morning for an 8 a.m. practice session.  During the all-skate portion of the session, Derani and Ricky Taylor swapped quick times.  However, when it was time for just the DPi and GTD Pro teams to set times, Taylor set down the fastest lap of the weekend with just under four minutes remaining.

Ricky Taylor’s lap was two-tenths of a second faster than Blomqvist.  Ganassi teammates Bourdais and Bamber were third and fourth, while JDC-Miller MotorSports’ Tristan Vautier was fifth.

Braun was fastest in LMP3 with a lap at 124.141 mph, seventh overall.  Braun’s lap was nearly five-eighths of a second faster than Andrews, his car fixed after the issues on Friday.  Grist was third, then Chaves and Marcelli.

GTD Pro saw Pfaff Motorsports’ Jaminet make the Toronto-area fans happy by topping the chart with a lap at 116.843 mph in the hometown Porsche (Pfaff Motorsports is Toronto-based and owned by a group that used to own a series of Toronto-area car dealerships before being bought out by Lithia Motors).  Jaminet’s lap was .088 seconds quicker than Riberas.  Jordan Taylor was third in the Corvette, then Juncadella and Connor de Phillippi.

Montecalvo was fastest once again in GTD with a lap at 116.783 mph, a lap just .039 seconds slower than Jaminet.  Montecalvo was .281 seconds faster than Winward Racing’s Philip Ellis.  Foley was third, then Madison Snow and DeAngelis.

The session had one red flag 40 minutes in when Vasser Sullivan’s Ben Barnicoat went off at turn 3.  He ended up getting towed back in before the session could result.  The No. 14 Lexus did not return to the track for the remainder of the session.

Qualifying for the Chevrolet Grand Prix is scheduled for 12:40 p.m. ET Saturday afternoon.  The session will be streamed live at 12:35 p.m. on both IMSA.com and Peacock.