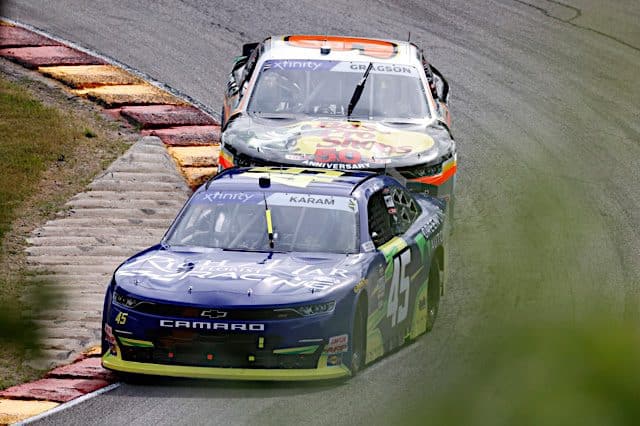 Things had been relatively calm so far in the NASCAR Xfinity Series’ Henry 180 at Road America on Saturday (July 2).

However, the holiday weekend spirit was not with Noah Gragson or Sage Karam, who dueled side-by-side just over halfway through the race. As the pair began lap 25 and exited turn 3, paint was traded between the two Chevrolets, patience was lost, and Gragson yanked the steering wheel to the right and sent both himself and the No. 45 of Karam spinning under the Sargento Cheese bridge.

The two were running near the tail end of the top 10, which meant three-quarters of the field had to navigate through the melee of cars and smoke. Gragson’s teammate Josh Berry, as well as Brandon Jones, scooted by as the two instigators’ machines, parted like the Red Sea, but Landon Cassill, John Hunter Nemechek and Josh Bilicki were the wreck’s next victims, Cassill’s car popping onto two wheels as it was hit from the side.

THE BIG ONE AT ROAD AMERICA!

A massive crash is sparked after @NoahGragson spins @SageKaram in front of the field as there's no where to go.@brandonbrown_68 made major contact with @TylerReddick, hoping he's ok.#NASCAR #Henry180 pic.twitter.com/Ll7ZZufp7L

The car that hit Cassill was Myatt Snider, who collected Tyler Reddick in the stack-up, and Brandon Brown subsequently had nowhere to go and piled into Reddick’s No. 48. Andy Lally was also involved as Brown ground to a halt near one of the retaining walls.

Lap 25 carnage during the @NASCAR_Xfinity race.

TV cameras focused on Brown as he delicately extracted himself from his No. 68, collapsing near the wall and clearly in some distress with his hands on his helmet. Snider was the first to get to him, running over after climbing out of his demolished No. 31 and checking on Brown.

Clearly rattled by the hit, Brown eventually managed to remove his helmet and sat with his head in his hands for several moments.

“Hate that we got our BMS team Chevy caught up in that,” Brown told NBC Sports’ Kim Coon after the crash. ” […] Just an area where there’s no spotters and very high speed, trying to carry as much as you can. Caught the dust cloud and, yeah, looks like the [No.] 45 went around, lot of cars went around. I couldn’t really see anything until I saw the [No.] 48 when I plowed him.

“Just a real gut check. Lost my breath, little kick to the area that you don’t want to injure. Just a bummer that it ended our day early. I just hate that.”

No penalty was issued to Gragson despite the contact.

Karam later added more thoughts outside of the care center.

“I think Noah just got confused and thought we were in a corner, but we were actually on a straight line,” he said. “I’m not really sure. We got really lucky, as far as all the drivers that were involved in that, to not have anybody get seriously hurt, because that was ridiculous. I’ve never been turned into on a straight line like that in car racing ever in my life, and he just flat-out turned to the right out of pure frustration.

“It was ridiculous. I think he tried to take officiating into his own hands, and you can’t be that heated while you’re driving a racecar, and unfortunately, he let his emotions get the best of him today. I’ve seen that with him, and he walks around like he’s the big man on campus around here and everything, and then he does stuff like that. It’s just not a good role model he is.”

Karam was asked whether he had any plans to talk to Gragson.

“I think a lot of people have already spoken to Noah, I don’t think Noah’s gonna change,” Karam said. “The short time I’ve been in Xfinity racing here, I have not heard a lot of great things about Noah, and he has not shown a lot of great racing with me on track, so I’m not sure if we can change Noah. I think this is something that Noah needs to take a look in the mirror, he needs to look at himself and he needs to want to make the change himself.”

NASCAR disagrees. No penalty issued after that incident. So if you're wondering what kind of wreck would cause NASCAR to get involved, the answer is something more blatant than what we just saw.

Tommy Joe Martins, who had both of his co-owned Alpha Prime Racing Nos. 44 and 45 involved, had some thoughts on Twitter as well.

Absolutely on purpose. @EarnhardtKelley @DaleJr I’m sure you’re embarrassed to even be associated with that. Hard racing and bumping a guy back I get but that kind of stuff can hurt someone. It’s too much.

NBC Sports commentator Jeff Burton had a similar crash at Watkins Glen International in 2009, where his No. 31 hit Sam Hornish Jr. in one of the track’s higher-speed areas.

“To hit a car like that, where they’re all essentially stopped on the racetrack, it is a feeling like nothing else,” Burton said. “Everything stops immediately, and it hurts every part of your body.”

Absolutely outrageous behavior from Gragson, leading to a lot of cars wrecked, Brown knocked around badly. All because Gragson is an immature little punk.

Gragson should be penilized or suspended for what he did. The replay shows he deliberately turned into Karam. Nascar do your job

Gragson and his attitude needs so be sat down for a few races to wake him up about his poor attitude. He obviously has no regrets about his actions, so something needs to be done. NASCAR is apparently afraid to do it, so how about Jr. Motorsports disciplining their hothead. Come on, Jr. and Kelly, do do something about this problem child you have.

He needs to have a “talk” with Jimmy Spencer.