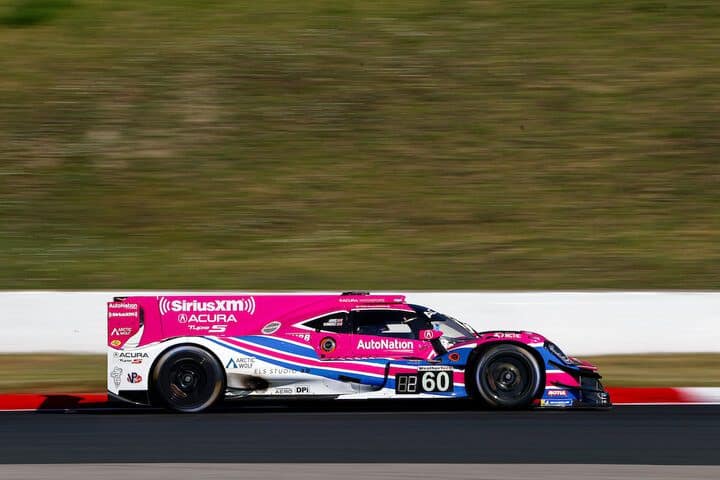 “It was absolutely everything I had,” Blomqvist told IMSA Radio’s Shea Adam afterwards.  “I wasn’t sure that I was going to survive the session, to be honest.  I had quite a few hairy moments, especially in the first couple of corners.  I had to close my eyes and be very, very brave.”

Unlike the other classes on Saturday, a number of the DPi teams chose to wait a little bit since the lap times at CTMP are such that you could complete a dozen laps in a 15-minute session.  The only drivers that went out right away were Ricky Taylor and Action Express Racing’s Olivier Pla.  The other teams joined in roughly halfway through the session.

Ricky Taylor was down in the low 65-second bracket on his first lap at speed.  His second lap at speed was a new DPi record.  He then continued to improve until he set a lap at 137.327 mph.

Then, the sheer forces involved in lapping such a track so quickly came into play.  Ricky Taylor nearly wiped out in Moss Corner.  Blomqvist did the same.  Chip Ganassi Racing’s Sebastien Bourdais actually spun out.  Bourdais didn’t hit anything, but his tires were essentially toast afterwards.

Blomqvist was able to set his pole lap with four minutes remaining in the session.  Ricky Taylor attempted to better it, but could not do so.

The final margin was ultimately .068 seconds behind the two Acura runners.  JDC-Miller MotorSports’ Tristan Vautier will start third in his Cadillac, followed by Chip Ganassi Racing’s Alex Lynn and Pla.

Andretti Autosport’s Jarett Andretti was fastest early on in LMP3 qualifying, but lost his advantage to Riley Motorsports’ Gar Robinson.  Undeterred, Andretti came back and set a lap at 121.097 mph to retake the advantage and win the LMP3 pole.

In GTD Pro, Corvette Racing’s Jordan Taylor was the first driver out on the track.  As a result, he was able to set the first time of the session.  He was on top for nearly the entire first half of the 15-minute session as the times dropped into the representative range.

Pfaff Motorsports’ Mathieu Jaminet took the top spot away from Jordan Taylor seven minutes into the session.  He then continued to improve until he set a lap at 117.300 mph to win the GTD Pro pole.  His lap was .422 seconds faster than The Heart of Racing’s Alex Riberas.  BMW M Team RLL’s John Edwards was nine-thousandths of a second slower than Riberas in third.  Jordan Taylor ended fourth, while Vasser Sullivan’s Ben Barnicoat starts fifth.

Barnicoat was a little late to the session after repairs to the No. 14 Lexus RCF GT3 following a crash in Practice No. 2 necessitated multiple runs through technical inspection.  Barnicoat showed that his Lexus was not significantly hurt by the incident as he was able to turn in competitive laps during the session

GTD saw Paul Miller Racing’s Madison Snow put himself on top early in the session, but Vasser Sullivan’s Frankie Montecalvo continued to show excellent form by putting himself on top of the chart.  Montecalvo improved until he ended up with a lap at 117.044 mph, .165 seconds slower than Jaminet.  That was good enough to give Montecalvo the pole.

Montecalvo’s lap was more than a third of a second faster than The Heart of Racing’s Roman DeAngelis.  Snow will start third, then Russell Ward and Robby Foley.

The Chevrolet Grand Prix is scheduled to go green at 3:10 p.m. ET Sunday afternoon.  The race will air live on NBC starting at 3 p.m.