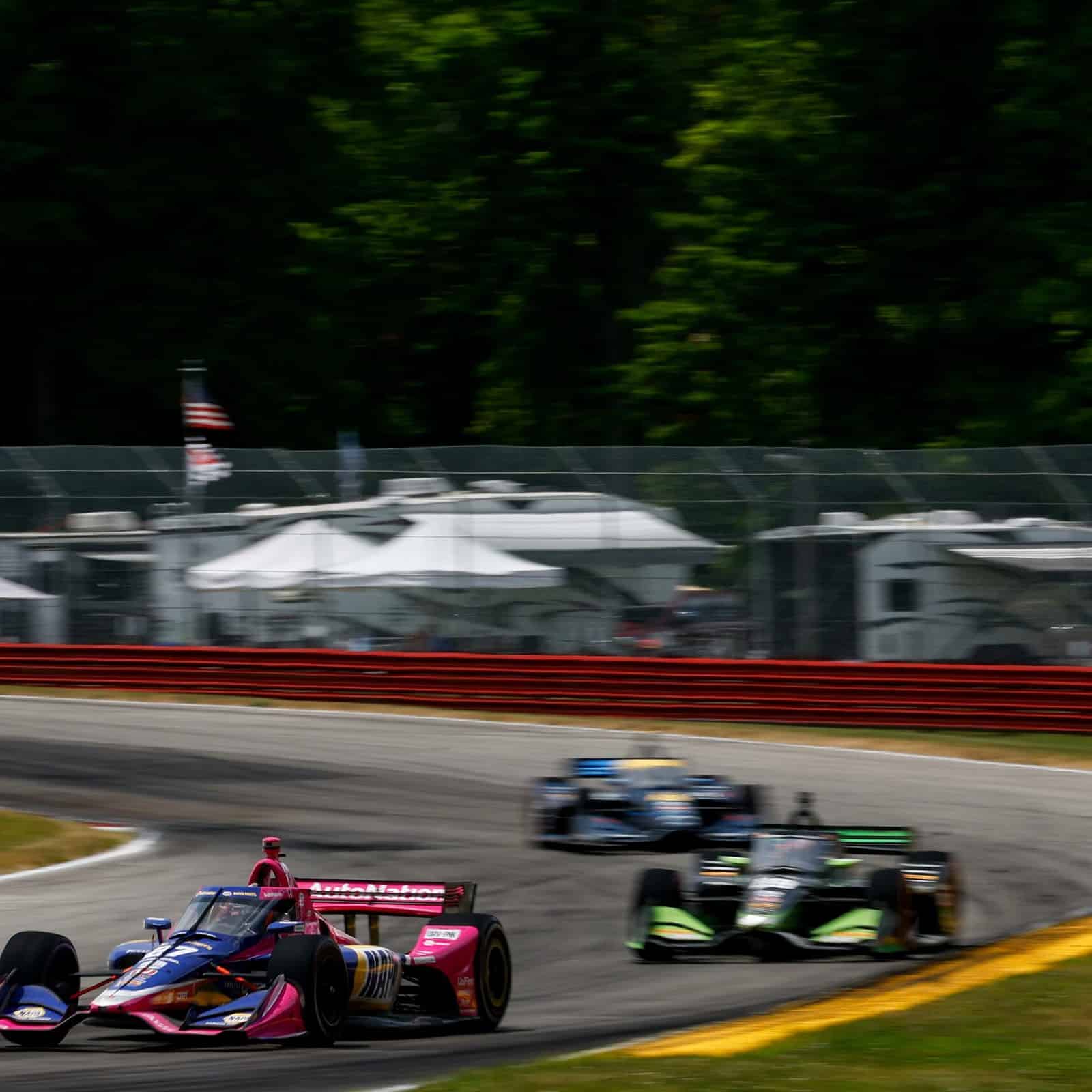 LEXINGTON, Ohio—If the first commandment of motorsports is ‘Don’t hit your teammate,’ then Andretti Autosport’s IndyCar Series organization will have to go to confession after Sunday’s (July 3) Honda Indy 200 at Mid-Ohio Sports Car Course.

The four-car armada had many incidents during the 80 lap race around the 13-turn, 2.258 mile road course, culminating with the No. 27 of Alexander Rossi and the No. 28 of Romain Grosjean both serving pit road drive-thru penalties on the same lap for contact with other teammates while Scott McLaughlin went on to win the race.

The Andretti Autosport misfortune started when Colton Herta was unable to pit before a full course yellow on lap 54 for Tatiana Calderon’s stalled car. With the pits being closed, the No. 26 Andretti Autosport Honda had to stay on track instead of pitting. Herta’s next pit stop would drop him through the running order.

Instead of remaining in the top four like the Californian had done throughout the race to that point, Herta dropped to 18th place after his lap 60 pit stop under the race’s final full course yellow that came out on lap 59.

On the lap before the caution came out, Rossi and Grosjean had contact with each other exiting The Keyhole, causing Grosjean’s left side wheels to throw up some dust. Grosjean attempted the same pass one lap later when Rossi’s car had understeer at the corner apex. With Grosjean’s car immediately outside of Rossi’s, the two collided, sending both cars into the grass and unleashing the Swiss-born Frenchman’s fury on the team’s radio as his car stalled.

“WHAT’S WRONG WITH HIM?!”@RGrosjean’s emotions were high after contact with teammate Alexander Rossi set him back Sunday at @Mid_Ohio. (via @IndyCar) pic.twitter.com/mGXShFBDJ5

The fiery Grosjean did not hold back his feelings about the incident with Rossi.

“He’s an absolute idiot. Sorry,” Grosjean said. “I don’t know why he does that, he’s on blacks, I’m on reds, I’m on the outside, I can carry more speed into the corner.”

Romain Grosjean on his race today and the contact with Alexander Rossi and Colton Herta:#Honda200 #IndyCar pic.twitter.com/96m0OKbUuZ

Grosjean’s tire advantage was due to running on the red sidewall alternate compound that Firestone brings to every road and street race alongside the black sidewall primary tires. The red sidewall tires have more grip, but are designed to wear out faster.

Rossi said that the incident between him and Grosjean was a racing incident and there was nothing intentional about it.

“He was on the softer tire and probably was going to get around me,” Rossi told NBC’s Dillon Welch on pit road after the race. “He likes to do it fast and early but yeah, had a touch of understeer there and obviously that’s unfortunate to happen to a teammate, but that’s the way it goes.”

INDYCAR called a full course yellow to restart Grosjean’s car. Grosjean was a lap down by the time the car was under way again.

After Rossi and Grosjean had one more brief moment of contact under yellow heading to the restart, their battle ended. However, their contact with other teammates was not quite finished. With 17 laps to go, Grosjean overtook Jimmie Johnson on the inside as the pair headed to The Keyhole. Grosjean lightly nudged Herta’s car at the apex, sending Herta through the gravel trap on the outside of the corner.

Herta spun his car around in the grass next to the gravel trap to face the right direction and rejoined the circuit, eventually finishing as the highest-placed Andretti Autosport car in 15th place.

Devlin DeFrancesco was not immune from contact, either. Rossi attempted to overtake the No. 29 Honda for 16th place on lap 70. Another instance of understeer meant that the 2016 Indianapolis 500 winner would hit the right side of the rookie’s car as the pair went through turn 6. The contact sent DeFrancesco into the grass exiting the corner, causing him to drop behind Johnson to his eventual finishing position of 17th place.

More contact between Andretti teammates!@townsendbell says, "there's mutiny at Andretti today. It is every man for himself." #INDYCAR pic.twitter.com/BAJQGyh9ep

After serving their penalties on lap 71, Rossi and Grosjean finished 19th and 21st, respectively.

Grosjean suffered a hand injury from the contact with Rossi that was not elaborated on and did want to apologize to Herta for the contact they had late in the race.

“I had a lot more grip than everyone else and I just braked,” Grosjean said. “I didn’t realize Colton would brake so early, so I tried to avoid contact. That wasn’t good from my side, but I think that’s going to be it as far as today, it’s just that Rossi is an absolute idiot out there.”

Not everything was all bad news for the Andretti Autosport organization, however, as Hunter McElrea scored his first Indy Lights win with a grand slam performance of pole, leading every lap and setting the race’s fastest lap.

The next IndyCar Series race is the Honda Indy Toronto on Sunday, July 17th at 3:00 p.m. ET. The race will air exclusively on Peacock.

In order to have understeer you have to be turning. Rossi just went straight into both his teammates. He is an arrogant idiot. I can’t believe McClaren signed him.

Wheel got knocked out of his hand and frankly, Grosjean just getting some of his own medicine. He is loathed by the entire paddock. And by the way Kevin, LEARN SPELL. It’s McLaren NOT McClaren…

He’s arrogant but he’s not an idiot. You spelled McLaren incorrectly.