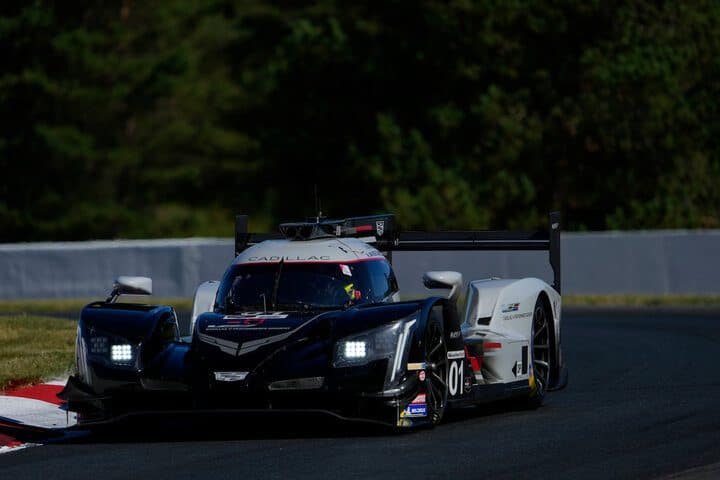 Chip Ganassi Racing’s Renger van der Zande took the overall lead away from Meyer Shank Racing with Curb-Agajanian’s Oliver Jarvis with less than 11 minutes to go in turn 3. From there, van der Zande pulled away to score his and Sebastien Bourdais‘ third win of the year in the Chevrolet Grand Prix at Canadian Tire Motorsport Park Sunday (July 3).

“This was hard work. The power steering was a big issue all race long,” van der Zande told NBC Sports’ Brian Till in victory lane. “In the fast corners, the power steering kept cutting in [and out]. In the end, it got better and I thought, with normal power steering, I might have a chance for a move. I was all in then. This is my day. I’m going to go for the win.”

The start was fairly chaotic. Meyer Shank Racing with Curb-Agajanian’s Tom Blomqvist started from the pole and just barely cleared Ricky Taylor in turn 1 to keep the lead.

Meanwhile, Sean Creech Motorsports’ Dr. Lance Willsey spun entering turn 1 and hit the inside wall after running into the back of Andretti Autosport’s Jarett Andretti. He then came across the track and clipped Frankie Montecalvo, the pole sitter in the GTD class who had dominated there for most of the weekend. Both drivers limped their cars back to the pits, so no full course yellow was thrown. Willsey continued, but Montecalvo was forced to go behind the wall with right rear suspension damage to his Lexus. They eventually returned to the race, but Montecalvo and Aaron Telitz finished at the rear of the GTD class, 17 laps down.

BMW M Team RLL’s John Edwards also caught a piece of the incident, but it came back to haunt him in a different way. Nine minutes into the race, Edwards lost his right rear wheel, which resulted in the race’s first full-course caution.

On the restart, Ricky Taylor cut his right rear tire entering Moss Corner. The tire casing came off on the Mario Andretti Straightaway, creating another full-course caution. Most of the leaders chose to make quick pit stops during this yellow. Blomqvist made a two-tire change.  The only DPi team that stayed out was JDC-Miller MotorSports’ Tristan Vautier, who claimed the overall lead.

Once the race restarted, Vautier was pressured extensively by Chip Ganassi Racing’s Alex Lynn. Vautier, driving a similar Cadillac to Lynn, resisted this pressure until they caught the GT3 cars. He put some distance between himself and Lynn as they passed the GTD and GTD Pro cars, which brought Blomqvist up to Lynn’s rear wing.

Vautier made his first pit stop 50 minutes into the race. That allowed Lynn to take the lead with Blomqvist on his tail. Blomqvist haunted Lynn until they caught another group of slower traffic. That allowed Blomqvist to sweep around Lynn on the outside of turn 3 to get back into the overall lead shortly before the round of green-flag stops.

After the stops, Oliver Jarvis ended up with the lead in the Acura, but he had to deal with Renger van der Zande in the No. 01 Ganassi Cadillac. The two drivers ran side-by-side all through the back half of the course before Jarvis was able to defend his spot.

Jarvis maintained a small gap over van der Zande until he encountered the LMP3 leaders, who had just made pit stops. Jarvis ran up on the duo and attempted to lap Andrews entering turn 4. Contact was made and Andrews slid off-course and into the tire barriers to bring out a caution. Andrews was ok, but he was done for the day.

Under the yellow, Jarvis chose to make a pit stop and top off his fuel. Van der Zande, Earl Bamber and Ricky Taylor chose not to. What that meant is that while they couldn’t make it to the end on fuel, their final timed stop would be shorter than everyone else.

The race restarted with 45 minutes to go with the Ganassi Cadillacs running one-two. However, it was only a few laps before everyone made their final stops.

After the final stops, the Acuras of Jarvis and Ricky Taylor ended up one-two with Bamber closing in on them both in third. Ricky Taylor tried to make a run on Jarvis, but lapped traffic backed him up towards Bamber. Bamber was able to get a run on Ricky Taylor headed into Moss Corner with 34 minutes to go and contact was made, resulting in the Konica Minolta-sponsored Acura spinning out and tapping the tires.

There was no full-course caution for the incident, but Bamber was judged responsible. As a result, he had to serve a drive-through penalty and dropped out of contention.

Once Bamber served the penalty, Jarvis had a three-second lead over JDC-Miller MotorSports’ Richard Westbrook with van der Zande giving chase. Any chances of Ricky Taylor contending ended with 25 minutes to go when he spun again and hit the tires exiting turn 9 at the pit in after contact with Action Express Racing’s Pipo Derani.

The green came back out with 19 minutes to go. Van der Zande knew that he had no time to lose and he immediately pressured Westbrook for second place. He got the spot exiting turn 3, but not without side-to-side contact. Once in second place, he tried to run down Jarvis.

With 11 minutes to go, lapped traffic gave van der Zande his shot. He made his move stick to take the lead. From there, van der Zande held on for the win.

Van der Zande and Bourdais’ margin of victory was 3.509 seconds over Jarvis and Blomqvist. Derani and Olivier Pla were third, followed by Bamber and Lynn after their penalty. Vautier and Westbrook ended up fifth.

In LMP3, Andretti had originally won the pole. However, Andretti’s Ligier JS P320-Nissan flunked post-qualifying inspection due to a suspension part being out of homologation. As a result, Andretti was put back to the rear of the class.

Andretti’s misfortune gave Riley Motorsports’ Gar Robinson the class pole for the start. Unlike the DPi class, no one in the LMP3 class with the exception of Willsey pitted during the first two cautions due to the minimum drive-time rule in effect.

Behind Robinson, the man on the move was Andretti. Despite Willsey running into the back of him at the start, Andretti quickly made his way back up to second. 38 minutes into the race, he made a three-wide move into turn 10 while Lynn was lapping him to take the class lead.

Andretti pulled out to a small lead, then lost it as Robinson was able to get him back before the first round of stops. Here, both Andretti and Robinson gave way to Gabby Chaves and Scott Andrews (subbing for Felipe Fraga) respectively.

Chaves and Andrews continued to swap the lead back and forth until the second round of green-flag stops with an hour to go. Chaves was able to get out in front of Andrews and opened a small gap. Less than a lap after the stops, the Andrews crash happened. This effectively eliminated Chaves’ primary competition but allowed CORE autosport’s Colin Braun to enter into the equation.

It did not take long for Braun to take the class lead away from Chaves on the restart. Once out front, Braun slowly pulled away. The final caution did not allow for Chaves to make any inroads as Braun and Jon Bennett took their second win of the year.

Bennett and Braun ended up 2.753 seconds ahead of Andretti and Chaves at the finish. Jr III Racing’s Ari Balogh and Garret Grist were third, followed by Andrew Wojteczko Autosport’s Orey Fidani and Kyle Marcelli, who were a lap down in their repaired car after crashing in Watkins Glen.

GTD Pro saw Pfaff Motorsports’ Mathieu Jaminet lead from the pole over The Heart of Racing’s Alex Riberas. When the second caution came out, everyone pitted for their first stop of the day.

Jaminet never truly got away from Riberas until nearly the halfway point of the race. That was when Riberas fell into the clutches of Corvette Racing’s Jordan Taylor. Jordan was able to get past Riberas for second in Moss Corner and brought DeAngelis in the No. 27 Aston Martin with him. The battle allowed Jaminet to extend his lead to nearly three seconds.

Once Matt Campbell got into the plaid and silver Porsche, he was able to hold off Antonio Garcia to take the class victory. The margin for Campbell and Jaminet was 1.115 seconds over Garcia and Jordan Taylor. Riberas and Ross Gunn were third, then WeatherTech Racing’s Daniel Juncadella and Cooper MacNeil. Edwards and Connor de Phillippi finished fifth after losing their wheel in the opening laps.

In GTD, Montecalvo’s dominant weekend turned to tears in turn 1. The Heart of Racing’s Roman DeAngelis avoided the chaos to snatch the class lead in his Aston Martin. He stayed up front the whole time he was in the car. The driver who comprehensively chased DeAngelis was Rick Ware Racing’s Aidan Read. Read moved up from the rear of the field to second and by the end of the run, he more or less matched DeAngelis on lap time.

Once Maxime Martin got in the No. 27, he opened up the gap on the RWR Acura. Winward Racing’s Philip Ellis passed Ryan Eversley for second and put a couple of the GTD Pro teams between himself and Eversley.

The final caution negated a decent lead for Martin and allowed Ellis to close up to the back of the Aston Martin. The two drivers battled hard for the final half-hour of the race, but Ellis never got alongside the Aston Martin. Ultimately, Martin held on for both his and DeAngelis’ second straight victory.

DeAngelis and Martin ended up just .493 seconds ahead of Ellis and Russell Ward. Eversley and Read ended up third, the best-ever finish for RWR in GTD. Turner Motorsport’s Bill Auberlen and Robby Foley were fourth, while Paul Miller Racing’s Madison Snow and Bryan Sellers were fifth.

There is a split schedule going forward for the next race. For the DPi, LMP2 (not active on Sunday) and LMP3 classes, their next race is at Road America in August. For the GTD and GTD Pro classes, their next race is the GT-only FCP Euro Northeast Grand Prix at Lime Rock Park on July 16. Frontstretch will be on-site in the Litchfield Hills of Connecticut to bring you all the action.