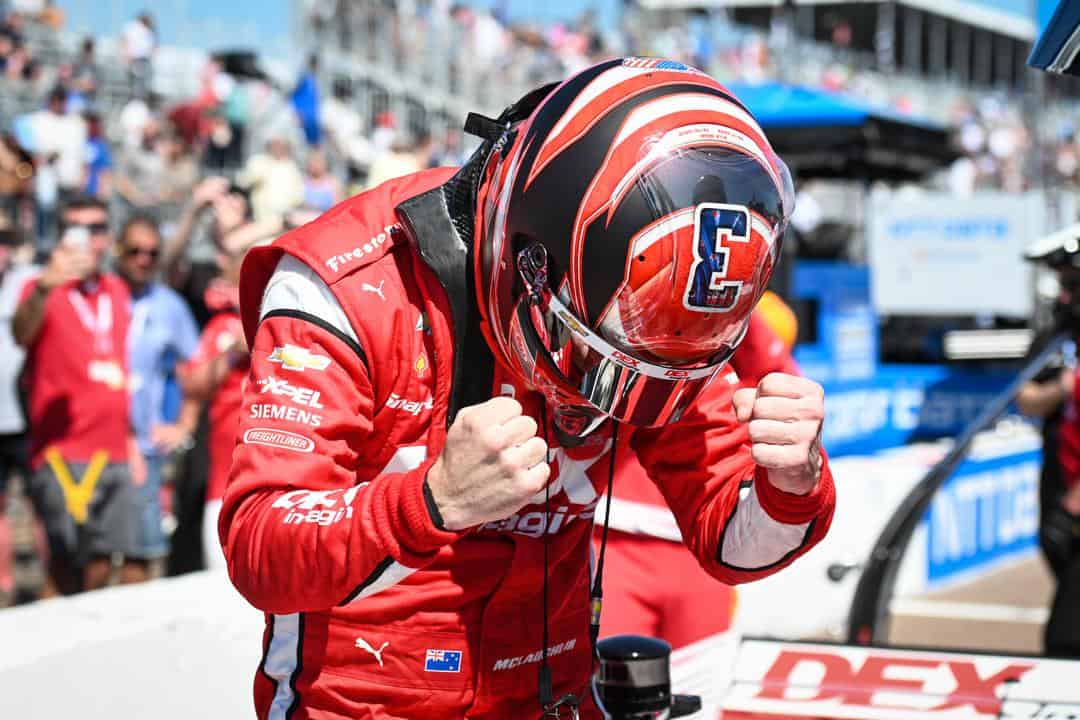 McLaughlin’s race was smooth and reserved, with the main challenge being managing the day’s whopping six caution periods and resulting restarts. Alex Palou crossed the line less than a second behind McLaughlin, with Will Power finishing off a spectacular drive from the back of the field with a third-place finish.

“It was tough, you know, you’re thinking about fuel but thankfully – obviously – Chevy gave us great fuel mileage and drivability off the restarts that allowed me to get a little bit of a gap from Palou,” McLaughlin told NBC’s Kevin Lee.

“I’m really proud of the guys, the car they gave me … We’re going to the moon!”

McLaughlin took the lead from polesitter Pato O’Ward during the first pit cycle of the day, where McLaughlin opted to stay out while O’Ward pitted on lap 29. While the pit cycle approached its end, Kyle Kirkwood slid wide and into the barriers in turn 9.

Race control kept the track under green flag conditions until most of the leaders had a chance to pit, leading to McLaughlin safely making his stop before the yellow flag flew; Palou and Colton Herta emerged from the pit cycle between McLaughlin and O’Ward.

From that point, McLaughlin controlled the race comfortably. Through caution period after caution period, the New Zealander held off a lurking Palou, who never got quite close enough to threaten McLaughlin with a late dive or crossover pass.

Attrition, and contact, reared their ugly heads throughout the course of the day.

First to fall victim was Arrow McLaren SP’s Felix Rosenqvist, whose engine expired suddenly on lap nine, handing the Swede a 27th place finish, his lowest of the season so far.

O’Ward’s engine soon began to complain as well. While leading on lap 29, O’Ward began to tell his team he was losing power. And within a matter of laps, the young Mexican was passed two at a time heading down the Mid-Ohio course’s long backstretch. O’Ward eventually lost power entirely on pit road and retired from the race on the 53rd lap.

Following Kirkwood’s off on lap 30, Dalton Kellett spun in turn 2 after being hit from behind by Jack Harvey only six laps later. Kellett was stranded in the turn 2 grass, triggering the third caution of the day.

On lap 53, Kirkwood’s A.J. Foyt Racing teammate Tatiana Calderon slid wide in a similar fashion to Kirkwood, leaving her No. 11 machine stalled and triggering yet another caution.

The final and most spectacular caution of the day was brought out when Romain Grosjean was left stranded in the barrier after contact with his teammate Alexander Rossi – one of a series of multiple collisions involving various Andretti teammates on the day.

The NTT IndyCar Series will take one weekend off before making its return to the streets of Toronto on July 17. The Honda Indy Toronto, which has not been held since 2019 due to restrictions surrounding the COVID-19 pandemic, will take place July 17 at 3:00 pm ET, with coverage exclusively on Peacock.