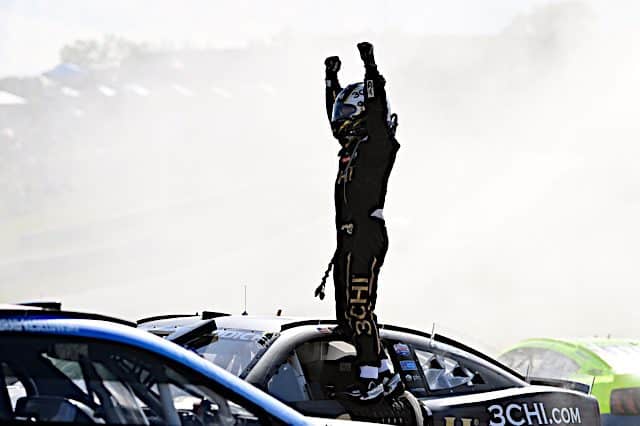 1. Two and done for Road America?

It’s the story every potential NASCAR Cup Series venue wants to tell: NASCAR takes a chance, adds you to the schedule, you have a successful debut, the follow-up sells well too, and then the series doesn’t come back after that.

OK, maybe that last chapter leaves a little bit to be desired.

Road America has seemingly done its part to repay NASCAR for putting it on the Cup Series slate, hosting a pair of races that have proved popular with fans in the greater Milwaukee area. It’s a beautiful venue, and has had a pair of popular winners after this past weekend’s Kwik Trip 250.

But it’s future is very much up in the air, and there are questions about whether the circuit is truly well-suited for stock cars. Fans on Twitter liked Sunday’s race, but not by a wide margin in Jeff Gluck’s poll.

The question of Road America’s future is also being framed as a zero-sum game against a potential Chicago street race. If that event comes together, the thinking is that the upper midwest doesn’t need both that and Road America.

Maybe that’s true. But if so, it stinks that Road America did pretty much everything right and still might not be back in 2023.

2. Maybe returning July 4 weekend to Daytona is one tradition NASCAR should honor

Even if Road America does return next year and beyond, does it need to be on the holiday weekend?

When the second Daytona race was held on or around July 4, it just felt right — even more so than the Daytona 500 leading off the season, to be honest. It helped the return seem special and it was easy to remember when it would take place.

NASCAR hasn’t stuck to many old-school dates for specific races as it’s worked to revamp the Cup Series schedule over the past few years, so in that respect, moving Daytona II to a random August weekend is no different.

But with all due respect to Road America, there’s nothing about that race that screams celebration. Restoring the 400-miler to the World Center of Speed would be a great nod to tradition in the midst of continual evolution elsewhere, and a move NASCAR should definitely consider.

3. Tyler Reddick’s win was something we needed to keep Winpocalypse 2022 alive

Though it’s seemed possible several times over the last few seasons, there’s been something about the 2022 NASCAR Cup Series season that made it feel particularly ripe for what continues to be the most (and perhaps only) fascinating playoff scenario possible: 17 or more regular season winners, meaning a victory doesn’t actually lock you into the playoff field.

Austin Cindric winning the Daytona 500 got us off to the proper start, and Chase Briscoe becoming a first-time winner a few weeks later helped as well. A nice mix of newbies and the usual suspects followed, and no one ended up hogging a bunch of wins. Indeed, to date no Cup Series driver has more than two 2022 victories, which is one of the essential ingredients if you want to see playoff chaos.

One of the others is for drivers who have seemed poised for a breakthrough actually pulling it off. Daniel Suarez fits that description, and he made good on his potential by taking the checkered flag at Sonoma a few weeks back. Tyler Reddick is another, a driver who has come tantalizingly close to his first Cup Series victory more than once.

Now that he has finished the deal in impressive faction, outdueling road course ace Chase Elliott at Road America, the Cup Series sits at 13 different winners with seven regular season races remaining. There are a few drivers you’d expect to win who haven’t yet, namely Ryan Blaney, Martin Truex Jr. and Kevin Harvick. It would be helpful if all three of them won soon, but even one pulling off a ‘W’ in the next two or three races will make me start to believe.

A quick run through the standings finds there are 11 other drivers who have previous Cup Series wins, and while not all of them have looked like they might add another this year (sorry, Brad Keselowski), the point is that they could. And if Blaney, Truex and Harvick can all come good, only one of the 11 needs to get the job done.

That doesn’t sound like much to ask. The drive for 17 winners is truly alive, and it’s glorious.

4. Is it OK to disparage your pit crew if they’re horrible?

Bubba Wallace let his disappointment with his pit crew bubble over in very public fashion two races ago … well, public because whatever’s said on the team radio get out eventually.

Bootie Barker apologizes to Bubba Wallace, but Wallace is furious after having another good run ruined.

"Leave me the fuck alone, dude. Don't talk to me the whole fucking race."

Barker says he understands why Wallace is upset, but he'll continue to talk to him.

This past weekend, Wallace’s team owner Denny Hamlin wasn’t happy about it, and said so at Road America.

Denny Hamlin said a driver can’t embarrass a race team, and that hopefully Bubba Wallace continues to get better with his in-car radio comments to his team: pic.twitter.com/SNQW2GoYoX

Here’s the thing, though: Wallace’s pit crew has been undeniably awful this season, costing its driver places time and time again. They’re professionals just like the drivers, and they’ve been terrible.

Yes, Wallace could handle his dismay differently, but he’s hardly the only Cup Series competitor with harsh words for his teammates. It happens almost every week.

It’s just with the No. 23 squad, it seems like it’s happening to them every week. That part isn’t on Wallace. As owner, Hamlin has the right to express his displeasure with his driver airing out his own team. But it’s hard to imagine that if his No. 11 crew was doing this badly, he wouldn’t be lighting them up, and because the buck stops partly with him, it’s up to Hamlin to do something about the mess in the 23 pits sooner rather than later.

It probably says something that a pair of wins and the return of his road course mojo, finale of Road America notwithstanding, is enough for the sportsbooks to believe Elliott is the number one choice to take the Cup Series trophy at season’s end. It makes sense, because the current playoff system rewards momentum, and Elliott has it right now, winning at Nashville and finishing second at Road America.

He’s also been there before, and championship experience counts for something — not just for the driver, but the entire No. 9 team, which knows what it takes to win a championship.

Yet Elliott is only a small favorite over Kyle Larson, with Ross Chastain (!) and Hamlin not far behind. In other words, there’s a lot more racing still to be done, and who’s on top on July 4 won’t mean much come November. Let’s say Elliott is a fine favorite for the moment, but nothing more than that until he does more.

What if there are 18 winners? “Win and you’re in!” What if you win and don’t get in? NA$CAR would have some ‘splainin’ to do, Lucy. Again! What is the “rule” interpretation going to be?

So Denny says a driver shouldn’t embarrass his pit crew. Has he heard some of Baby Busch comments? It could be a prerequisite for employment at Reverend Joe’s company.

The more talk about the street “event” in Chicago means the brain trust in Daytona is going to do it.

but denny paying the pit crew and crew chief for the 23 team. the driver of the 23 needs some sports psych help. i always said hamlin needed the same thing. it’s a team, you win as a team and lose as a team. the constant throwing team under the bus is not a good work environment.

i can’t see how a street circuit can happen. these cars are so sensitive to handling issues. i guess this is one way for chicago to get streets repaved on someone elses dime?

Of course they will – but they’ll need to race MRAPs.

DoninAjax, the win and your in comes from the media not the NASCAR rule book. The rule is actually indicated where the top 16 are winners and the best of the rest based on points and the winners have to be among the top 30 in points which essentially covers say Boris Said winning a road course race. If there are 16 or more winners then the 16 winners are in and no one gets in on points. If 17 or more winners then top winner by quantity and then single winners get in based on points position. So if you have a win but are 26th in points and more than 16 winners you are likely out.

What NA$CAR “rule” book? Like Indiana Jones said, “I’m making this up as I go.”

I’m thinking there might well be trouble in 23VI land. Could MJ be getting tired of upstart Trackhouse, handing them their head week, after week? As in 4th & 5th at Road America.
I would have thought Hamlin would have backed his driver rather than the underperforming crew. True the driver isn’t getting it done either, but we don’t know if this is cause, or effect. And won’t know until they do something meaningful about the crew.

Don’t forget that Bubba’s the team cash cow. There’s a reason Petty was willing to give him an ownership stake in the team in exchange for staying.

Stat tuned, I expect there’s other shoes to drop. It would seem to make sense to switch pit crews, as Busch is already qualified.

Michael Jordan doesn’t care if his teams win or not, as long as he makes money. Don’t believe me then take a look at his NBA team and how high paid players get traded. You were right, Gibbs threw Bell under the bus in hopes bubba gets a win. Bet Bell and everyone opened their eyes on this crew trade. Bell had a chance on points.