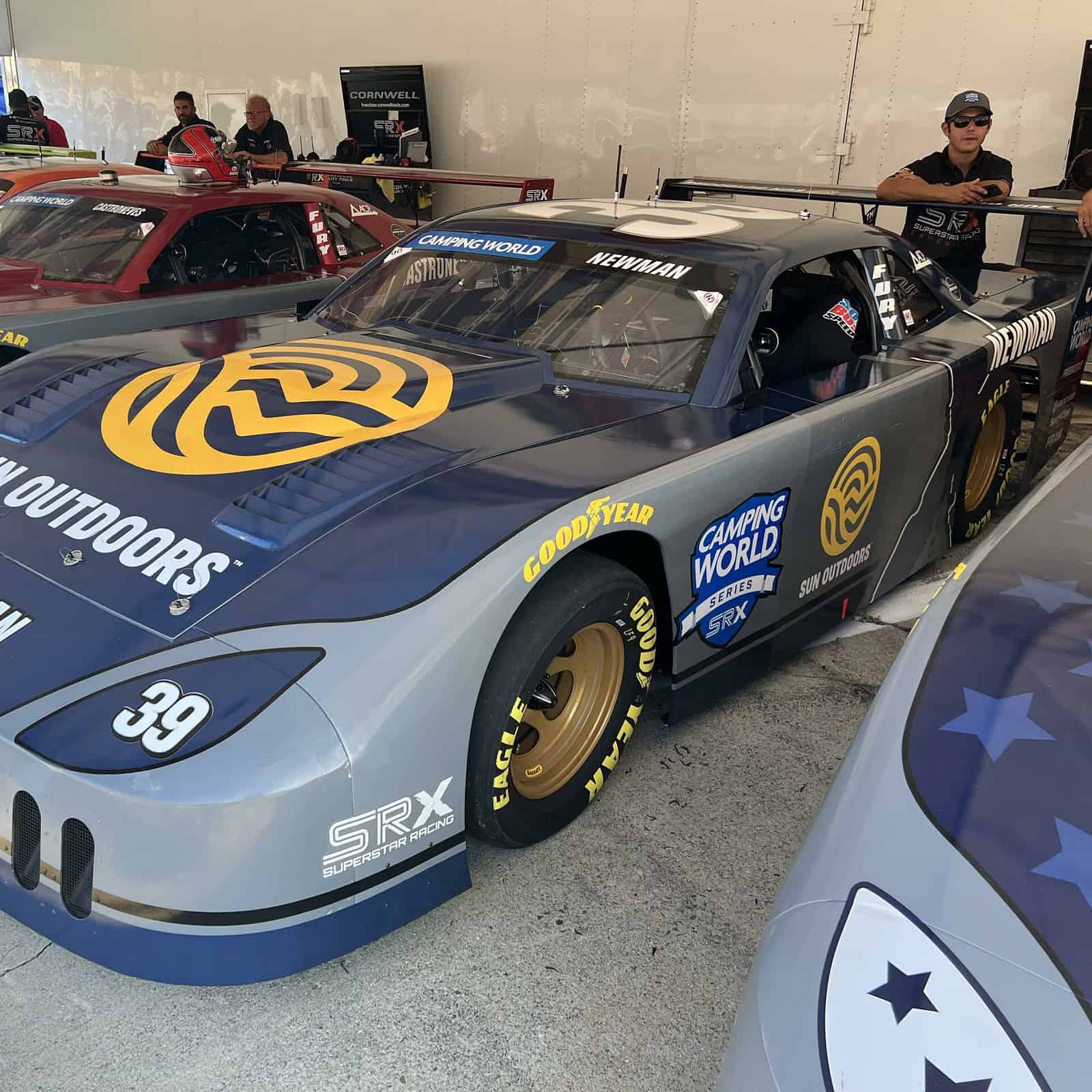 For the third race of the 2022 Camping World SRX Series season, the series returned to Stafford Motor Speedway in Connecticut as it neared the schedule’s halfway point.

Stafford is where the inaugural 2021 season kicked off, and at 2022’s said halfway point, there are now three winners in three races. Saturday (July 2) night’s victor was an unexpected one, at least in terms of how the night unfolded, with Ryan Newman.

Marco Andretti and Tony Stewart traded the lead and dueled for most of the evening with Greg Biffle in tow, but one of the later restarts turned the “Rocketman” loose.

Newman finally made it into the top five after the two-thirds-mark restart on lap 51, having rode around in the back half of the pack all night and unable to make moves on the cars in front of him. He moved to fifth right after the restart, and a daring single-corner pass of both Biffle and Paul Tracy moved Newman into third.

This put Newman in prime position for a front-row seat to the Stewart-Andretti battle, and the caution with 11 to go allowed Newman to get into position for a run at Stewart. He got one after the restart, scooting to his former owner and teammate’s inside and nosing by, and subsequently set his sights on Andretti. Newman passed Andretti with six laps remaining, trading a bit of paint with the No. 98 as they exited turn 4, and pulled away to win his first career SRX race.

It’s a testament to — similar to NASCAR’s Cup Series — how even-keeled the competition has been in 2022, even if starting further back in the pack means drivers don’t have as much of a chance to move forward. Newman made it happen, starting ninth and carving his way through the field late.

That said, Newman, Stewart and Bobby Labonte have both finished in the top five every single race this year. There’s no clear front-runner yet, but they’re — forgive me as I borrow a recent NASCAR-based term — the “Big Three” of SRX in 2022.

Newman’s SRX competition comes in the first year of his career without scheduled NASCAR racing since 1999, having spent 22 years in any capacity in the Cup Series, and he becomes the second straight SRX winner with primarily NASCAR experience. The win helped him retain his mantle as SRX points standings frontman.

Though tempers didn’t flare as much at Stafford as they did at South Boston Speedway, things still got heated, and it was all in front of a sold-out crowd. With SRX in its second season and still finding its footing, it’s fantastic to see that these races have drawn incredible crowds just about every single time out and it’s a positive sign for the series’ future as essentially a successor to IROC.

Last week’s dust-ups and the drivers involved in them, particularly the Michael Waltrip – Ryan Hunter-Reay disagreement, didn’t rear their heads, but the racing certainly got contentious at times and had the potential to reach that boiling point. Stewart and Ernie Francis Jr. had their own confrontation at South Boston, but Francis didn’t race at Stafford.

Newman, Andretti and Tracy made up the podium, while former Joe Gibbs Racing teammates Stewart and Labonte finished fourth and fifth, respectively.

Venturing deeper into the field, Hailie Deegan pieced together a decent night in her first SRX entry of 2022, coming home sixth after starting on the pole and finishing second in the first heat. It’s a solid performance that comes during a frustrating Camping World Truck Series season in which she has yet to score a top-10 finish.

Matt Hirschman, who won the Spring Sizzler in April, entered as the guest driver but didn’t make too much noise. His eighth-place finish stands in stark contrast to one-time entrant Doug Coby last year, who won the whole enchilada in Stafford, but as our Michael Finley wrote, those were astronomical standards to match. Bubba Pollard‘s runner-up effort at Five Flags Speedway remains the best performance for a ringer thus far in 2022.

See also
Doug Coby: 'I Am Different Than What You Usually See' In NASCAR Truck Series

To round out the field, the struggles continued for Waltrip. Waltrip has finished last, second-to-last and last in the three SRX races so far, a frustrating continuation for the driver who only scored one top five in all of 2021’s races.

The June-July slate next highlights Nashville Fairgrounds Speedway, a track long discussed in the Twitterverse as being a great spot for an eventual Cup Series race. That’s still up in the air, but July 9 will feature the half-mile oval on TV screens around the country as it plays host to the fourth race and two-thirds mark of the SRX season.