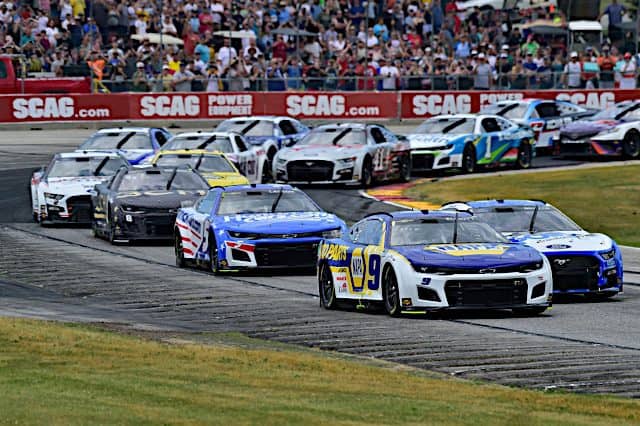 It was only a matter of time. When a driver gets their first runner-up finish, it starts to look like a win might be in the cards. When they finish second five times, it becomes a matter of time, and for Tyler Reddick, the time came Sunday (July 3) in the Kwik Trip 250 at Road America.

Reddick started fourth and finished 10th in stage two. But his final pit stop set up a battle for the lead with Chase Elliott, a driver that looked like he couldn’t be touched for most of the race. Reddick closed on Elliott after their last stops, and when Elliott made the slightest bobble on lap 47, Reddick pounced. He held off Elliott for the remaining laps to score his first NASCAR Cup Series win.

Reddick becomes the fifth first-time winner in 2022, the most since the NASCAR Cup Series’ second season. He’s the third driver to win his first in three road-course races this year.

And don’t forget Michael McDowell. He made headlines last year, winning his first career race on NASCAR’s biggest stage, but he’s quietly having an even better year in 2022. McDowell hasn’t won, but his eighth-place finish Sunday is his seventh top 10 this year, a career-high at just halfway through the season.

McDowell is a dark horse pick for a playoff spot because he’s always in the conversation at the superspeedways and Daytona International Speedway is yet to come, as is the pseudo-super at Atlanta Motor Speedway. But he’s also an outstanding road racer, and with two road courses also between now and the playoffs, he has a shot.

By the time the Cup race rolled off on Sunday, the weekend at Road America already had its share of excitement. The Xfinity Series race on Saturday featured a fantastic finish, but also an incident that many wondered if NASCAR should have addressed differently.

Noah Gragson was understandably upset with Sage Karam after Karam bumped the No. 9 a couple of times on track, but his reaction was way over the top. Gragson turned hard right into Karam, spinning the other driver out and triggering a multi-car pileup as many other drivers could not see the incident until they were on top of it. The end result was ugly: 13 total involved with multiple cars too damaged to continue. Brandon Brown climbed from his car and collapsed against the retaining wall; he was OK with time to recover a bit, but it was a scary moment.

Should Gragson have been penalized for the move? In short, yes. He should have been held for a couple of laps at the bare minimum and preferably parked. Frustration is understandable, but intentionally wrecking a driver with no regard for the others involved because of it is inexcusable. There’s even some wiggle room for extra aggression coming to the checkers, but this wasn’t that. This was just a driver showing his lack of maturity and perhaps why the Cup teams haven’t come calling.

Polesitter and defending race winner Elliott looked like a lock to win yet another road course race. He gave up stage points for fuel strategy, and it looked like nobody could touch him on the long game. Elliott led a race-high 36 laps, but in the end it was Reddick’s hunger that took away Elliott’s edge. His second-place finish keeps Elliott firmly in the point lead.

Cup champ Kyle Larson knows how Elliott is feeling because he lived the same race on Saturday, leading 31 of 48 laps but losing the lead to a hungry youngster in the closing miles. Larson finished a strong third on Sunday, a bounceback that he needed. 2022 has been anything but consistent for the defending champion, who had four wins at this point last year.

Sonoma winner Daniel Suarez entered the weekend with confidence after his win at Sonoma Raceway and a top-10 car on the practice charts. Suarez started 17th and worked his way into the top 10 quickly. By the end, it was another top five for Suarez, who finished fifth.

While it’s not exactly time to usher the Cup veterans to the old folks’ home just yet, the guard is changing. This season has seen a whopping five new race winners, the oldest of whom (Suarez) is 30.

The oldest winner this year is 43-year-old Kurt Busch. Only he and Denny Hamlin have visited victory lane at over 40 this year, and only Kyle Busch and Joey Logano are also over 30 (and Logano is just 32 despite his veteran status). That leaves eight winners under the age of 30, the youngest of whom, William Byron, is just 24.

All five new Cup winners have won at every level in NASCAR, with wins in the Camping World Truck, Xfinity and Cup series; Reddick becomes the 41st driver to accomplish this. Suarez, Reddick and Austin Cindric are all former Xfinity champions (Reddick twice).

It’s safe to say the future of the sport is in good hands.

It’s round two for NASCAR’s newest, smallest superspeedway this week as the Cup Series heads to Atlanta Motor Speedway. The spring race ran like the hybrid it was, a miniature Talladega Superspeedway on a mile-and-a-half cookie-cutter, with the results as mixed as they often end up at the superspeedways.

But four months down the road, with teams having that long to figure out the Next Gen car, will this race play out the same? If so, that list of winners could rack up another name, making the playoff race even tighter.

While the new car hasn’t been a magic band-aid for all that ails the Cup Series (and shame on anyone who thought it would), it’s kept the playoff race interesting and also allowed more good drivers to be competitive each week. That’s a win.

How… do you figure the intangibles?

Numbers are important in racing. As memories are lost to time, the numbers stand as a testament to races and feats gone by.

But what about things that can’t be quantified by statistics? Talent can be seen via observation, yes, but there’s still so much to take into account, like equipment and funding. The points system in place at the time affects how we view a title or the driver who fell just short. The level of competition, the rule book, the weather on any given day.

There’s a certain amount of subjectivity in watching drivers because of all this and how we interpret it, yet one thing observers have been able to do with decent accuracy is watch a young driver and get a sense that the wins are coming, and soon. The signs are almost always there (but not always; there are surprises too, like Cindric’s Daytona 500 victory this year), not just in the numbers, but in bold moves and confidence in taking positions on track.

It’s not always obvious just how far a driver will go. And, to some degree, the numbers will tell us that when all is said and done. But the buildup, and the ride, are there for us all to watch, and sometimes there are signs of greatness underneath the surface.

I think something needs to be done with Grayson. Being intense is one thing, but he’s had temper issues in the past. Wonder how JRM would like a bill for all the cars that got caught up in his revenge driving?

It’s hot and humid here in Atlanta. Chance if thundershowers every day in the afternoon/evening.

IMO, Gragson went waaay over the line of the point where NASCAR should issue some kind of penalty (even if it was just being held a lap…. something). I am beginning to wonder if there is even a line anymore and I am sure the drivers do too.

Johnny Morris will fund the 9 no matter who Jr puts in the seat. Someone needs to explain that to Elvis imposter.