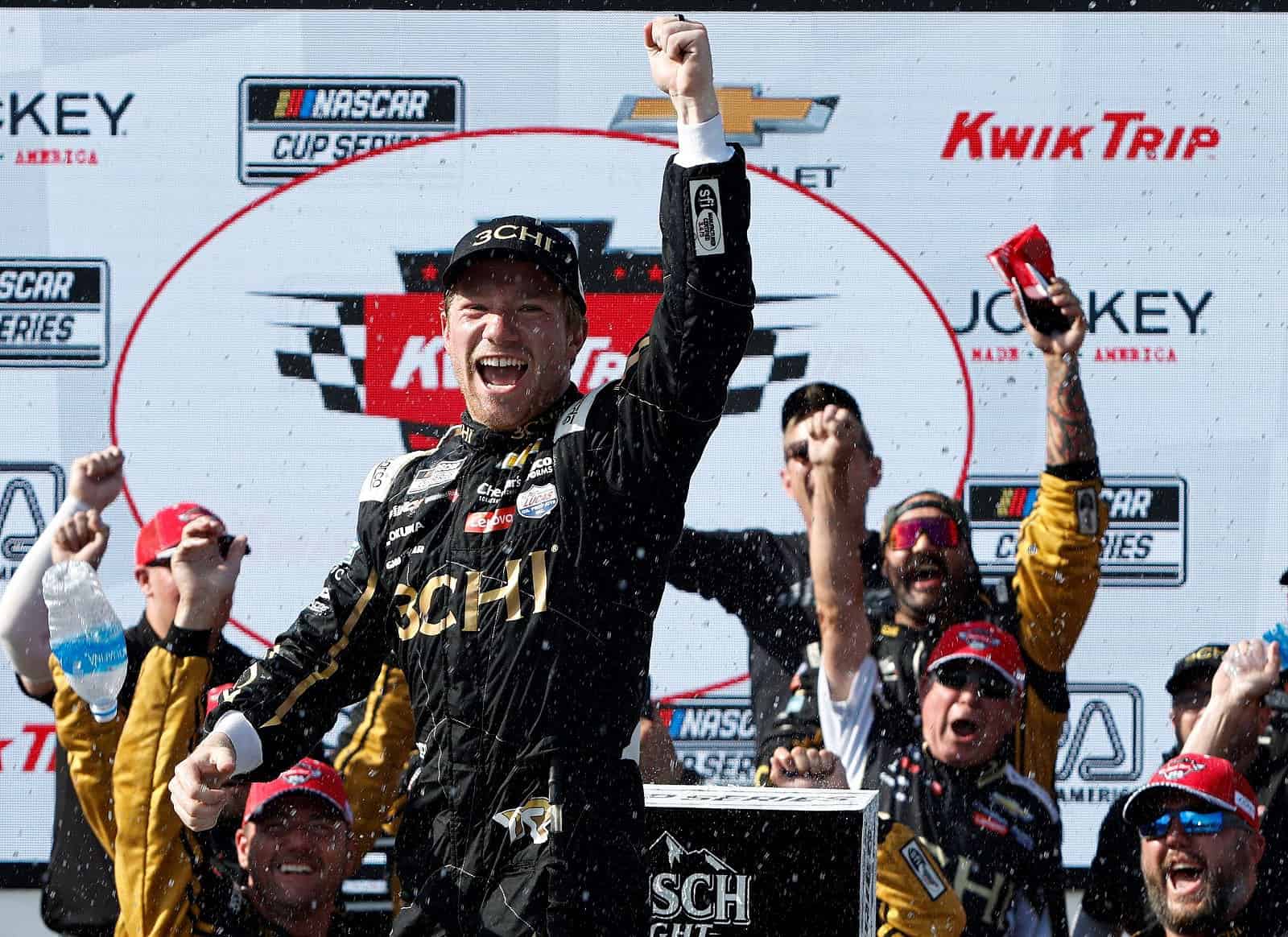 The NASCAR Cup Series is up to five first-time winners in 2022. Tyler Reddick became the latest driver to join that list on Sunday (July 3) at Road America. Reddick, along with everyone else, spent most of the afternoon trying to catch Chase Elliott. But after Reddick and Elliott both made their final pit stops with 19 laps to go, Reddick was able to close the gap and make the decisive pass.

Elliott tailed Reddick for several laps after that, but Reddick was able to slowly pull away as the race wound down. By taking the checkered flag, Reddick became the 13th different driver to win in 2022, giving him an edge in an increasingly tight race to make the playoffs.

Sunday was also a day of triumph for Richard Childress Racing. RCR ended a two-year winless drought in the Cup Series, one that stretched back to Austin Dillon’s victory at Texas Motor Speedway. Until Sunday, Dillon’s Texas win was the only Cup Series victory by RCR since he and the No. 3 team won the 2018 Daytona 500.

Clearly, RCR has not been winning races at the rate it used to. And it is likely for that reason that Reddick’s long-term future in the Cup Series often has an air of uncertainty. It seems like each year, Reddick’s name comes up as a possible replacement for whatever vacant seat is open with one of the large, multi-car organizations. The thought is that RCR, a team that has been noticeably declining for almost 10 years, cannot possibly be the permanent home for a driver like Reddick, who has shown enormous potential over the last few seasons.

But what if RCR is exactly where Reddick is supposed to be? Earlier this week, Reddick confirmed that he would be returning to RCR in 2023, with the team picking up the option year on his current contract. That still means Reddick and Childress would need to work out a long term deal if Reddick is to stay in the No. 8 beyond next year. After Sunday, it is hard to believe that Childress would rather have anyone else, or even that Reddick might want to leave. The Reddick-Childress pairing has the potential to make RCR a weekly contender in the Cup Series once again.

A driver who can regularly contend for wins is something that RCR has been missing for a long time. Ever since Kevin Harvick left the team at the end of 2013, Childress has struggled to find a suitable replacement. The team had a couple dependable veterans in Ryan Newman and Paul Menard, but the two of them won only one race each as RCR drivers.

Meanwhile, Dillon scored some big victories and has put up respectable results year-to-year. But at this point, in his ninth full-time season as a Cup driver, it is unlikely that Dillon will ever turn into the type of racer who can reel off wins and battle for a championship. What RCR really needed was a driver who could elevate the team and compete with the top drivers in the sport each week.

Enter Reddick, whose path to the Cup Series was far from straightforward. Reddick’s first full-time shot at one of NASCAR’s national touring series came with Brad Keselowski’s Camping World Truck Series team in 2015. After two seasons there, he took a part-time ride with Chip Ganassi Racing in the Xfinity Series, only to jump into a full-time Xfinity effort with JR Motorsports in 2018. Despite some early season struggles, Reddick was at the top of his game during the playoffs and captured the Xfinity Series championship.

It thus came as a surprise when Reddick moved to Childress’ Xfinity team for the 2019 season. Reddick explained that he felt like RCR would give him the clearest path to a ride in the Cup Series. After a year-long slugfest with Christopher Bell and Cole Custer, Reddick won the Xfinity title again, and was indeed promoted to the Cup Series for 2020.

However, leaving JR Motorsports still seemed like a big gamble. That team had provided a direct pipeline to Hendrick Motorsports for drivers like Elliott and William Byron. Then, as Reddick and Childress were celebrating their Xfinity championship, Jimmie Johnson announced a few weeks later that 2020 would be his last season in NASCAR. At the time, it felt like Reddick had miscalculated and might have been in line to replace Johnson had he stuck with JR Motorsports.

Perhaps Reddick’s previous ties to other organizations also played into the idea that he and RCR would not stay together. Throw in the agonizing number of times Reddick came close to winning over the last two-and-a-half years, and it’s reasonable to think that he might look elsewhere for greener pastures. But after outrunning the whole field on Sunday, including Elliott and Hendrick, Reddick and Childress now have demonstrable proof that they can win races together on pure speed. That should give both parties confidence in each other as they prepare for the playoffs, and beyond.

Between the contract option this week and the win on Sunday, Childress clearly knows what he has in Reddick.

“We’re still here, hammering away,” Childress said after the race. “I’m just so happy for Tyler. I knew watching back in the Trucks (Series), then he wins Xfinity and he won the championship and all with us. I know he can do it; I knew he could do it, and here we are.”

“He’s got that will, whatever it takes to get up there and win the race,” Childress added. “He’s got it in his heart to be a winner, that’s what he wants to be. Now he wants to be a champion and I think we can push him into it.”

Fans will rightfully look back on this race as the moment Reddick finally got over the hump and earned a well-deserved Cup Series win. But a few years down the road, we may also remember Sunday’s race as the beginning of a resurgence by RCR. Reddick seems to have given this team an energy it has lacked for a long time. Now that he’s got the first win, more are sure to follow. If Childress really does commit to racing for a championship with Reddick, the two of them could stay together for a long, long time.

I wonder when Childress will realize his mistake with Austin?

Years ago but what could he do ! His daughter and wife would have never let up.

When will USA realize nobody wants that reality show !