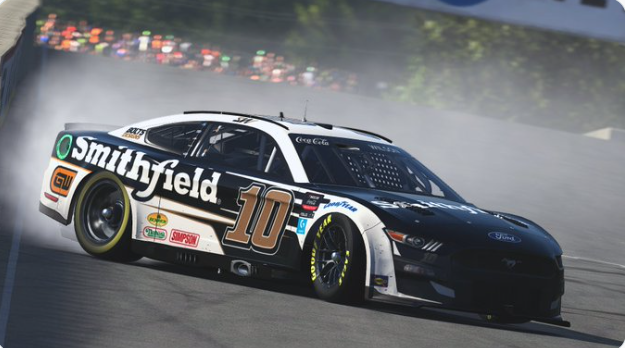 The past four races going into the 11th race of the Coca-Cola iRacing Series season ended with drivers securing their first win of 2022, but Steven Wilson made sure that streak did not grow to five.

Wilson piloted his No. 10 Smithfield/Stewart-Haas eSports Ford to a dominant victory on the road course at Road America on Tuesday, July 5, leading all 25 laps from the pole. It is Wilson’s second win of 2022, joining Michael Conti and Nick Ottinger as repeat winners this season.

“Honestly, I feel like the difference today was qualifying on the pole,” Wilson said. “I got that three-second gap on lap 1, and the clean air was enough for us to hold on.”

WINNER!@swilson3_ takes the victory at @roadamerica. It's his second win of the 2022 season and the third victory for #SHReSports. pic.twitter.com/8EF7CVLYEA

The opening lap produced the most chaotic racing of the night. It all started when Dylan Duval in the No. 41 got turned around by Vicente Salas in the No. 19 near turn 7, collecting Garrett Manes in the No. 31. In a separate incident further down the track, Dylan Ault in the No. 40 and Matt Bussa in the No. 75 got together near the entrance to the carousel. Ray Alfalla, the winner two weeks ago at Nashville Superspeedway, and defending series champion Keegan Leahy also got involved in lap 1 incidents.

After the eventful first lap, the drivers settled into a rhythm and got accustomed to navigating the 4.048-mile road course in their Next Gen NASCAR Cup Series cars. Throughout the race, there were only a few other incidents with drivers getting off course. Most notably, Leahy steered his No. 45 23XI Racing Toyota off course near turn 12, also known as Canada Corner, and eventually had to drop out of the race due to engine issues, finishing dead last in 39th place.

The top five remained mostly consistent throughout the race. Mitchell deJong, the 2021 Road America winner, had to settle for the runner-up spot this time around in his No. 23 23XI Racing Toyota. deJong tipped his cap to the race winner after.

“Steven [Wilson] did a fantastic job,” deJong said. “He perfectly managed the race. I gave it everything I had.”

Casey Kirwan made his way up from his sixth starting spot to round out the podium in third place.

“Everyone was so even that it was so tough to gain spots,” Kirwan said.

Graham Bowlin in the No. 48 Charlotte Phoenix Toyota and Bobby Zalenski in the No. 18 Interstate Batteries/Joe Gibbs Racing Toyota rounded out the top five at Road America. Positions sixth through 10th went to Salas,  Manes, Blake Reynolds, Conti and Ottinger, respectively.

Excited to have @SimpsonRacing on the car for tomorrow's #eNASCAR @CocaCola @iRacing Series race!

As usual, @boltsdesigns knocked it out of the park. Hopefully this thing will be up front where it belongs. https://t.co/UqkCqUFp8P

What an incredible experience! I felt good on the track, and got up to speed quickly. Thanks everyone that came out and helped make this happen. I can’t wait to do it again! Stay tuned 😎 pic.twitter.com/pJiebsUVko

The eNASCAR Coca-Cola iRacing Series will return in two weeks to Pocono Raceway for 60 laps around the Tricky Triangle on Tuesday, July 19. The race will start at 9 p.m. ET, and it will be broadcast live on eNASCAR.com/live, YouTube.com/iRacing and Twitch.tv/iRacing.