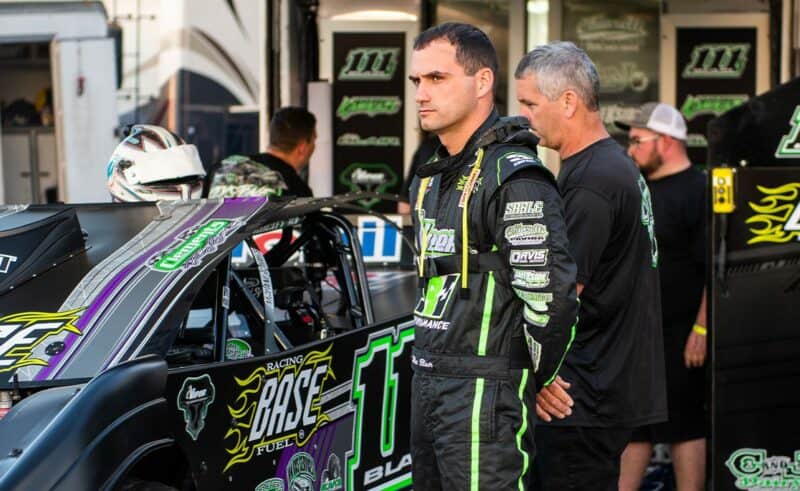 On a night that saw a number of national names in late model racing fall out early, current Rookie of the Year leader in the WoO ranks, Max Blair, came back from a flat tire on lap 32 and battled all the way back to the front of the field, only to fall short by a few car lengths as Fairmont, W.V.’s Jake Hawkins won the richest race in Beckley Motor Speedway history early Tuesday morning.

Blair led the opening 31 laps of the feature that started Monday night, but gave up the lead under the race’s first caution that saw four different cars pit for flat tires and led to an extended yellow-flag period as the track surface was checked.

Hawkins would lead the rest of the way, holding off a side-by-side challenge for the lead from Carson Ferguson on lap 53, then from Blair in the closing laps.

It looked like the lower groove at Beckley had started to take rubber during the second half of the Beckley USA 100 feature, which would have made a challenge more difficult, but nonetheless Jake Hawkins didn’t put a wheel out of place in holding off determined charges from Carson Ferguson, Zack Dohm and Max Blair to score the richest win of his career. The mid-race exchange with Ferguson was the best action of the feature.

Hawkins v. Little Fergy for the lead! This is great stuff here in Beckley! pic.twitter.com/1A23GoiTEV

And one more note on Hawkins, he won the first heat race of the evening in dramatic fashion, besting Tyler Erb by a nose with a last-lap pass.

Josh Putnam wasted no time bringing some fireworks to the Beckley USA 100 proceedings, going the wrong way on the track during the first heat race to block and stare down Hawkins after contact between the two sent him spinning. Fortunately, cooler heads prevailed and Putnam got back to business, rebounding to race his way into the feature.

“Ten years ago I would have parked it on his roof.” But a more mature @joshputnamracin saved his stuff and put it in the big show via a B Main after a heat race altercation with Jake Hawkins. pic.twitter.com/ZdiV91Qzjc

There was no shortage of national firepower in the super late model field at Beckley, with Lucas Oil Late Model Dirt Series regular Tyler Erb, Kyle Strickler, Joseph Joiner and Max Blair making the Monday night trek. Of that list, Blair ended up making the most noise, winning his heat race and leading the opening 31 laps of the feature. Having said that…

Blair can’t help but be disappointed to see $20,000 slip away courtesy of a flat tire during the race’s first caution period. That Blair managed to race his way through the field back to second over the final 69 laps was an accomplishment, but given the track conditions in the final second half of the race it’s hard to imagine Blair would have been passed had he stayed out front.

Fast Freddie Carpenter didn’t make it even to heat racing this evening despite having made the haul from Muskingum County last night to race at Beckley. The K machine appeared to make contact with the turn 4 wall before his Cadillac car rolled to a stop in turn 4 during hot laps.

Ridgeley, W.V.’s Matt Cosner was all but invisible all night in his home state. Fortunately this race wasn’t on Dirt Draft, because if it had been I’d have started Cosner and been burned doing so; he finished last in the Beckley USA 100 feature.

I debated whether to include these drivers in this section, but the top-three drivers in Southern All-Stars points (Matt Dooley, Billy Franklin and Shay Miller) all were no-shows for Monday night’s race due to a “gentleman’s agreement.” Current series points leader Dooley had engine troubles that prevented the team from being race-ready for Beckley, leading Franklin and Miller to opt out of racing to avoid tainting the points race, according to series announcer Dewayne Keith.

The intent here is admirable and the math makes sense given that those three drivers are separated from fourth place by more than 200 points each less than halfway through the season. But I can’t help but feel for both the promoters and fans at Beckley that put huge money up to host the Southern All-Stars only to have the series leaders not show up. That’s no small part of what a sanctioning fee is paid for.

Now, having said that, while I understand that it costs big money to host races with huge $20,000-to-win purses, Beckley Motor Speedway was definitely pushing it to the ragged edge with their admission prices for the Beckley USA 100.

$40 for general admission and $50 for a pit pass is the most expensive dirt late model race I can remember seeing on the East Coast in 2022, and exceeds the most expensive admission I’ve paid this season, which was for a World of Outlaws late model show at Marion Center. Not only is that a bigger name tour, their points leaders showed up. Fortunately, so did the crowd at Beckley.

The Beckley USA 100 feature ended at around 12:30 a.m., hardly the “24 Hours of Beckley” that some on Twitter referred to the race as. Having said that, the headline feature ending at 12:30 a.m. on a weeknight and nearly six hours after program start is asking a lot of race fans and teams alike. And there absolutely was an inexplicable lull in the racing program.

Goin on 40 min between mods and super race at beckley with no track prep….come on guys

Placerville, in California, on a work night, wrapped up before Beckley, in West Virginia.

Take a hint. When the enduro class is starting their feature well after 12:30 a.m. on a Tuesday, it’s time to dial the schedule back a bit. And watching the track spend time to let an expected count of two mini wedge cars run on a 0.375-mile oval was beyond frustrating. Dewayne Keith’s pre-race 4th of July speech referenced that as Americans, we’re all in this together. That must be how the fans at Beckley felt slogging through to the Beckley USA 100 feature.

I want to like announcer Dewayne Keith. I really do. His enthusiasm for the sport is admirable. But 24 hours removed from the James Essex/Dustin Jarrett masterclass in race announcing at Muskingum County last night, Keith’s shortcomings were on full display. Monday’s Beckley USA 100 call was not Keith’s loudest in terms of volume, and I can’t remember hearing colloquialisms such as “slobberknocker” over the course of 100 laps.

Colloquialisms aren’t a bad thing, I’m a James Essex fan after all, and Keith’s use of “catfish hollow” to describe low-side moves is completely appropriate. What’s missing when Keith calls races though are specifics. It doesn’t help any Flo Racing viewer to hear about a driver going to catfish hollow if we don’t know what position it’s for.

Oh yeah it’s great not knowing why 2 of the top 5 are on pit road in the A-main, but at least we get 100 shoutouts and an update on the strawberry shortcake.

The style is there. The substance is lacking. Especially in covering a series that, despite being streamed on Flo Racing, lacks the production values and support cast that the national late model tours have.

On that note, going through social media to write this column, it was a pleasant surprise to see how many videos the Southern All-Star guys posted as the Beckley USA 100 was racing. Job well done. Having said that, if they had that kind of social media presence, why the hell could we not have a pit reporter for this race?! Having next to no clue what was going on that sent half a dozen cars to the work area under the lap 31 yellow was beyond frustrating as a viewer.

Where it Rated (on a scale of one to six cans with one a stinker and a six-pack an instant classic): We’ll give the Beckley USA 100 three chilled Budweisers. It was nice to have a race to stream on the front porch while watching fireworks, but the program outstayed its welcome.

Up Next: The late models keep bringing big money, so Thinkin’ Dirty this weekend rejoins the Lucas Oil Late Model Dirt Series for the Gopher 50 at Deer Creek Speedway in Minnesota for a $50,000-to-win feature. Coverage can be found on Flo Racing.