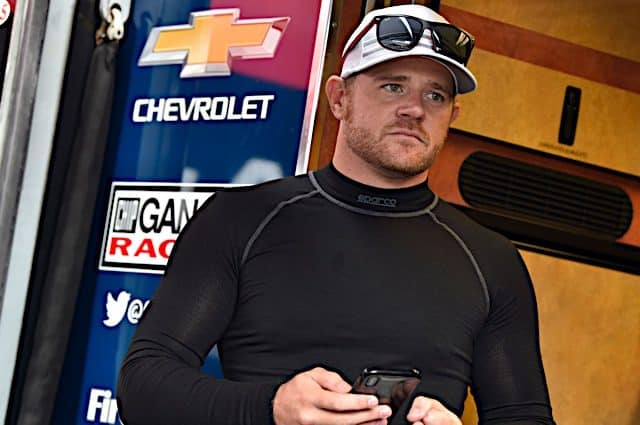 This weekend, the NASCAR Camping World Truck Series returns to action after a single off weekend that gave teams a break following eight straight weeks of racing.

It also happens to be one of two races remaining before this year’s playoff field is set. And with just five drivers locked in on wins, so many drivers still have a shot at putting themselves into the championship conversation.

One driver looking to spoil the hopes for the full-time competition is Justin Marks.

Marks, who will make his first NASCAR start since 2018 this weekend, returns to racing at the same track he scored his lone NASCAR victory in 2016. He does so in the No. 41 Niece Motorsports Chevrolet.

The owner of Trackhouse Racing Team has set the NASCAR Cup Series on fire this season with its incredible performance in its second year.

I know I know. Said I’d never drive a NASCAR race again. But thanks to the kindness of @WWEXRacing and @NieceMotorsport I just couldn’t say no. https://t.co/yapyBTDsab

Marks’ 2016 win isn’t his only success at Mid-Ohio and road courses, in general, though. After that lone victory, Marks finished in the top 10 at Mid-Ohio the following year and posted top fives at Road America in 2017 and the Charlotte Motor Speedway ROVAL in 2018 before hanging up his NASCAR helmet.

If that’s not enough, Marks has also seen plenty of success in sports cars with eight wins in IMSA, including two at Mid-Ohio. It’s easy to see why this race weekend was one chosen to put Marks behind the wheel once again.

“I’m glad I can help support Niece Motorsports and thrilled to be in the Worldwide Express colors,” Marks said in a media release. “Their Silverados have been fast this year so we are going to Mid-Ohio this weekend with the mindset of not only having fun, but believing we will run well. I know how fast Carson Hocevar was at the road course in Sonoma before he had to turn over the truck to Daniel [Suárez]. I expect he’ll be just as good on the road course at Mid-Ohio.”

But perhaps what’s more important to pay attention here is the increased teamwork between Niece and Trackhouse. After all, a few weeks ago, Suarez stepped into Hocevar’s No. 42 Chevrolet at Sonoma Raceway when he was unable to finish the race due to injuries sustained at World Wide Technology Raceway at Gateway.

Despite going two laps down during the driver change, which happened under green flag conditions, Suarez was able to recover and ultimately finished sixth.

“It’s tough to be 100% comfortable when I’m jumping in someone else’s truck,” Suarez said at the time. “The only thing I had of mine was my steering wheel.

“It was busy, man, it was very busy,” he continued. “I was hoping to go one lap down. When we went two laps down, I was like, man, it’s gonna be a long recovery. I was hoping to recover quicker than that.”

As Niece continues to improve its Truck Series program and puts itself in a better position to compete for wins on a regular basis, it’s clear that the team is growing in a lot of good ways.

By having the kind of relationship it has with Trackhouse and its Cup team, it allows Niece to focus on its Truck Series program while still having a pipeline into NASCAR’s top series. Instead of spreading its resources thinner in trying to expand to multiple series, it wouldn’t be at all surprising to see the two organizations partner to provide a path to Cup for drivers that came through Niece’s truck program.

Of course, there is a lot of speculation and assumption in the above, however, the fact that both organizations share a sponsor in Worldwide Express and putting Marks behind the wheel of a fifth truck for Niece clearly indicates the potential for future partnerships.