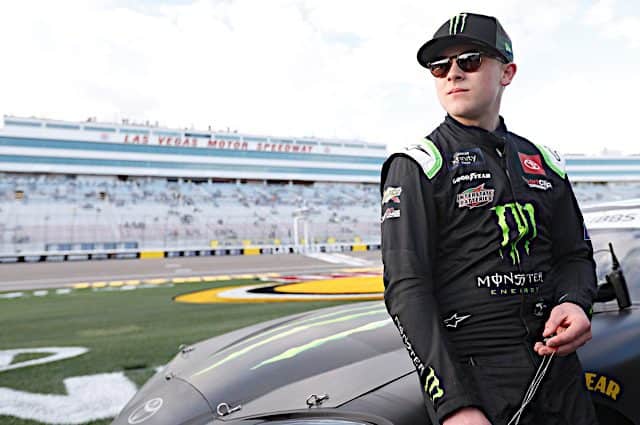 Ty Gibbs. However you feel about him, one thing is or certain. The kid is an extremely talented racer. Take last Saturday (July 2) for instance.

At Road America, Gibbs went out and beat defending NASCAR Cup Series champion Kyle Larson at a road course, proving that his talent is not only real, but it is versatile as well. He’s done everything he’s needed to move up to the Cup Series, so with that we ask is it time for Joe Gibbs Racing to move Gibbs to Cup in 2023?

From the moment that he won his NASCAR Xfinity Series debut, it was clear that Gibbs had Cup Series star potential.

He has already racked up eight Xfinity wins in just 34 career starts, and he is coming off a win at Road America where he passed Larson on the last lap of overtime.

At just 19 years old, Gibbs already has an impressive list of accolades — but that shouldn’t be the reason to rush him into Cup just yet.

For starters, Martin Truex Jr. is returning for 2023. The No. 19 was the most likely landing spot for Gibbs, but that ship has sailed. The rest of Joe Gibbs Racing’s lineup should also return next year unless Kyle Busch is unable to find a sponsor or the team decides to make a sudden driver change in the No. 20 car. For now, there isn’t room for Gibbs unless JGR loans him out to another team.

Second, JGR should remember what happened after rushing one of its former prospects to Cup.

Joey Logano was hailed as the greatest thing since sliced bread as a teenager, and he initially lived up to hype by winning in his third Xfinity Series start. But after just a part-time Xfinity Series season in 2008, Logano was sent to Cup in 2009 at 19 years old. While he did score two wins in four seasons, Logano struggled to find his footing and failed to reach the lofty expectations that were set. He was out of JGR after 2012, and he only became a star in 2013 after a change of scenery at Team Penske.

He had two full seasons worth of experience in Xfinity and the Camping World Truck Series before moving to Cup, and he too scored just two wins in his first four seasons. And just like Logano, Jones was given the boot after year four.

Perhaps the same story is playing out today. Bell also had a ton of hype after winning a Truck title and 16 Xfinity races over a span of three years, but it is now his third year in Cup and he has scored one win. To his credit, Bell has been running top 10 for the majority of the year; but he is still a ways away from contending for wins on a consistent basis.

With JGR’s homegrown talent historically having hit or miss results after being promoted to Cup, it would be better for JGR to err on the side of caution and give Gibbs another season in Xfinity. Having Gibbs race in the Cup Series at 20 years old would be too early, especially when the number of successful 20-year-olds in Cup can be counted on one hand.

An extra year would not only give him more experience, but it would also help him mature as a driver.

Gibbs has been involved in several incidents this season, and he made headlines for the wrong reasons after his post-race fight with Sam Mayer at Martinsville Speedway. That behavior will not sit well with Cup veterans, and Gibbs will have some lessons to learn before taking the jump to the next level.

Nevertheless, the Cup talent is clearly there; it’s now up to JGR to have Gibbs Cup ready in the next year-and-a-half. -Stephen Stumpf

Look, not only does Gibbs have the equipment, but he has the talent to back it up.

I don’t see why he shouldn’t make the jump to Cup!

There have been plenty that have done less in the Xfinity Series who have made the jump to Cup and have had successful careers in the Cup Series. Plus, he’s won at all different kinds of racetracks, which really shows just how good he is.

He’s won at 1.5-mile tracks (Charlotte Motor Speedway, Las Vegas Motor Speedway, Kansas Speedway), short tracks (Richmond Raceway), and road courses (Daytona International Speedway road course, Watkins Glen International and Road America). Not many drivers have had the success at all different type of tracks this early in their careers. Usually, the versatility comes after a few years in Cup.

There is one issue, though: who does Joe Gibbs Racing move to put Gibbs in a Cup car?

Christopher Bell is under contract through 2023 as well, as is Denny Hamlin. Feasibly, the only one on the hot seat is Kyle Busch, whose longtime sponsor M&Ms is backing out of the sport at season’s end. However, moving Busch out of a ride due to lack of sponsorship would be a decision the team would regret, even bringing on a talent like Gibbs.

Yet, there is an organization in which Gibbs could go and that is 23XI Racing. They are a two-car operation and have a lot of potential to grow with the deep pockets of team owners Michael Jordan and Hamlin.

Hamlin has hinted a desire in making the team a major force and adding the maximum number of teams to his organization would do that.

That’s possible not only in a third car but maybe replacing Kurt Busch as well. It was announced that Busch signed a multi-year deal with the organization before this season, but he is the longest tenured driver in NASCAR and it’s possible he could have a change of heart after a not-so-great season on the track.

Gibbs would be a heck of a replacement if Busch does decide to hang ’em up after 2022. – Michael Nebbia

a winner in xfinity does not make a winner in cup. you cited logano. it’s happened before. i don’t think gibbs has the maturity to handle not being able to win right out of the gate in cup. they are 2 different series, different cars. he needs to have that mental maturity, and maybe another year in xfinity will give him that.

i just don’t think he’s ready and if he tangled with the wrong veteran in cup, it could be costly.

He should run a few events in 2022 in the 23 to compare the results of the car with different drivers.

Let the little two headed monster run cup full time next year. I’ll enjoy seeing his car in the wall all the time.

I expect that that decision has already been made. Otherwise Gibbs would probably have sweetened the pot For Martin to have created a vacancy for the pup, of grandpup for ’23.